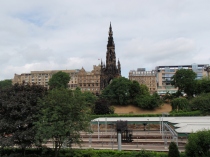 Our first full day in Edinburgh started off just fine. We easily walked into town, across the Waverley Bridge and into the Old Town.  A wee bit about Edinburgh history here. Everything started with the Castle, which has been around, in one form or another, for close to 2000 years. It was built on the mound of an extinct volcano and would have been an imposing presence no matter which era you’d seen it. Had there been guidebooks back then, Roman centurions would have found it on their list of “places to avoid.” Of course, being a castle, the odds of it remaining intact and unchanged for so long are pretty slim. Like any institution from that time period, it’s been destroyed and rebuilt numerous times, with the current oldest building being St. Margaret’s Chapel, built circa 12th century, and still in use today. From the castle, there extends the Royal Mile (which is really only about 3/4 of a mile) and the various buildings around it. This is the Old Town.  Up until the 18th century or so, this was the area known as Edinburgh (which, literally, means the city if Edin, who was possibly the founder of the original castle WAY back when). So basically, you had about 80,000 people living in an area about 3/4 mile long and maybe half a mile wide and, like New York, they built up instead of out, so people were living on top of each other and it wasn’t a great place to be. It was decided a “New Town” would be built to the north of the castle to help alleviate the overcrowding and sewage problems they were having (more on that later).

So anyway, there we were, in the Old Town, on the Royal Mile, about to head up to visit the castle. After a quick stop for breakfast we made our way onto the royal grounds. The main grounds were set up for the Royal Edinburgh Military Tattoo, an annual parade ground festivity in August (same time as the world famous Edinburgh Arts Festival, home of the even more famous Edinburgh Fringe Fest) which shows off the military precision of the various regiments in Scotland and from around the world. Never having seen the Tattoo itself, I can say I was suitably impressed with the annual setting up and tearing down of the stadium (which started in April and ended in November).

The queue to get in to see the castle interiors, however, were doubly impressive. We had been told to get there early, but even early it was still packed. We checked the prices and the crowds and decided, judiciously I thought, to forego the actual castle interior for other, more desirous destinations. Yes, I know the castle is the most visited paid attraction in Scotland, but neither of us were in a castle mood so we took some pictures, visited the gift shop and headed back down

The first thing we thought about doing was the Whiskey Experience which boasted the largest collection of Scotch Whiskeys in the world. It also offers a ride in a moving keg to explore the world of whiskey. Again, looking at value for money, we decided a trip to an actual distillery would be more fun and would include a possible tasting so instead, we went to the gift shop, got a list of local distilleries with a map and bus time table to the nearest one and headed back out into the street.

Are you seeing a pattern here? Here’s the thing: We had both time and money to spend, but we figured it would be better to spend them wisely seeing the things which really piqued our interest over obvious tourist attractions and money-grabbing operations. In this case, it was a matter of trying to find the real thing rather than a Disney-esque facsimile and besides, while 13 pounds may not seem like a lot, when you’re converting from litas, it’s pricey.

So instead of faux culture we decided to hit the real thing and went to the Scottish National Art Gallery.

The gallery is located just next to Princes Street Gardens. Now here’s another little bit of history for you. Where the

gardens now stand used to be a body of water called Nor Loch (a “loch,” by the way, is not just a “lake” with an accent. A “loch” is an enclosed body of water which may or may not have direct access to the sea – so while all lakes are lochs, not all lochs are lakes… got it?). Now, Nor Loch was basically a stagnant pool of water which wasn’t too far, and on the downhill slope, from the Old Town so when all of those 80,000 or so people needed someplace to send their waste, Nor Loch it was. With the coming of the New Town, also came a draining and repurposing of the land which was Nor Loch into the Princes Street Gardens (all those years of shit getting dumped into it must have had a wonderful effect on the soil because the grounds are beautiful).

The gallery itself is also very nice. A neoclassical building, not too big, houses an impressive collection, including, for a 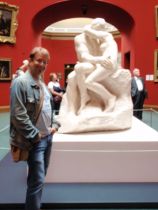 short time, Rodin’s “The Kiss.” It also has pieces based on Shakespeare’s “Midsummer Night’s Dream” which allegedly inspired Lewis Carroll, “The Rev Robert Walker Skating on Duddingston Loch,” a delightfully whimsical piece featuring an ice skating clergyman and a Rembrandt self-portrait. The museum is also small enough to be able to see it all comfortably in an hour or two. All in all, a really great experience. It must have been because we decided that our next stop would be back into the Old Town at the Royal Museum and Museum of Scotland.

These two museums, while in connected buildings, are actually two separate entities. One is devoted to the history of Scotland while the other is a general artifacts, relics and natural history items. Truth be told, we were a bit tired going 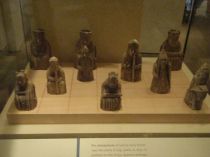 through the exhibits, but the Lewis Chessman are amazing (and really funny), the tiny coffins with the weirdly dressed dolls are a bit creepy and I avoided the taxidermied “Dolly, the sheep” display as much as I could. The building for the Royal Museum is fantastic though. It looks like a reverse riverboat, with the multilevel promenades all encircling a huge atrium. The building also offers a rooftop viewing area, which is a great spot to get the lay of the land.

Across the street from the museum buildings is The Elephant, another bar which boasts of hosting J.K. Rowling while she was writing HP1. However, unlike The Spoon, which has an unassuming plaque, The Elephant has a banner proclaiming its shoulder brush with fame. The line to get a picture with said banner was too long to give serious consideration to waiting in it so we headed back down towards New Town, through Anchor Close, a small, heavily staired passageway we’d already been through twice this day. Our destination was the “Gothic Rocket,” a monument to Sir Walter Scott (the tallest monument to any writer ever).

It does, in actuality, look like a rocket. Specifically like the top of the rocket ride which used to be at Disneyland, only

about three times taller and made of sandstone which has been dyed black due to the smoke which used to permeate the city (and gave it the nickname “Auld Reeky” which means exactly what it sounds like). And for four pounds, you could have the privilege of climbing to the top of that crazy thing (stopping, of course, at the first level to enjoy the Scott Museum). The monument is approximately 200 feet high with 287 steps. And of course, the higher you go, the narrower and steeper the steps. The view from the top, though, is amazing! Of course, having to yell down into the spiraling darkness that you’re headed down, so no one come up can be a little intimidating, but still, a good time.

So, it being a perfectly Scottish day, we decided to end it with a perfectly Scottish meal at a little place we found called the Auld Hundred. And for our Scottish meal? Haggis. I’d been dreading the haggis since I got here, having heard all the horror stories of what it was made of and how it was prepared but hey, I figured I should at least try it, right? So we ordered a portion to split between Jennifer and I and when it came, the first thing I noticed was that it didn’t look like anything I was expecting. It looked like heavily spiced ground beef fried up nice. And in fact, that’s exactly what it was. Haggis is not a scary, extreme food eaten only by people from Scotland or who have their own Discovery Channel shows. It’s pretty good in general and I highly recommend trying some when you find yourself visiting the high or lowlands.