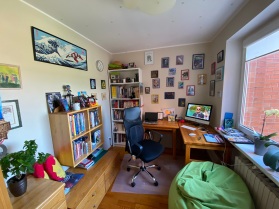 So let’s break this down. What is this question actually asking? How much depth do we get into? Do we look at the micro or the macro? I suppose that’s the mark of a good question though, huh? That you can read many interpretations into it and approach it with whatever angle you want. END_OF_DOCUMENT_TOKEN_TO_BE_REPLACED

Here’s a wonderful look at Lithuania, something a little more than the “G Spot” of Europe. Sure, he doesn’t mention Kaunas, but it’s still pretty cool! #SALTIBARSCIAI 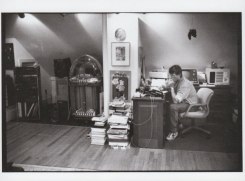 Gavin at Zen Pencils does some really amazing work. I’ve shared his stuff before and I’m sure I will again. This time it’s about writing and its importance in the life of the writer.

So about a month ago, I get out of the shower and take a look at my face. This isn’t all that unusual, most of us do it (take a look at our own faces, if you’re looking at my face that might be unusual). Anyway, I notice that while I’m in need of a shave, there’s a weird patch of… nothing, just under my right nostril (see picture).

Interesting, I think. I look like a 70s era cocaine fiend and jokingly ask Rasa, who isn’t so keen on my facial hair to begin with, if she’s been waking up in the middle of the night to shave a part of my face or apply depilatory cream? She denies it, rightly so, and don’t think about, shaving the rest of my face to match. END_OF_DOCUMENT_TOKEN_TO_BE_REPLACED

So yesterday I won an award. Was nominated for four.

I was voted by the student body at Vytautas Magnus University a likely candidate to be the funniest professor, the best orator, best foreign professor and best all around professor. I took home the prize for Best Foreign Professor. This time around the award was a large hourglass which takes about a half hour to cycle through. Last year was an engraved globe and the year before a sculpture for the desk. Third year in a row I’ve won this particular prize. END_OF_DOCUMENT_TOKEN_TO_BE_REPLACED

Last week was Thanksgiving in the US (fourth Thursday after the first Monday), traditionally a day to spend with family. END_OF_DOCUMENT_TOKEN_TO_BE_REPLACED

A few days back, my friend Monika asked what my weekend plans were and if I wanted to go to Anykščiai, a village of about 12,000 people in the north midwest area of the country. Now, for those playing at home, Monika is a great friend and in the past we’ve done some great road trips like to Tallin and Finland, just to ride the roller coasters (of course, that trip was before I was blogging so no good record of it exists outside of incriminating photographs). Now, though, Monika has a car so there’s a whole new world open to us. Add in the fact that LAST year for my birthday, she gave me a stuffed creature and a book of 100 sites to see in Lithuania in which I had to take pictures of the creature and I was falling behind due to my lack of independent transport. END_OF_DOCUMENT_TOKEN_TO_BE_REPLACED

A week or two ago, I was talking to my friend AAron. We try to keep up on a semi-weekly basis and this time there other people with him and his family and one of these other people, upon finding out I lived in Lithuania, had a question for me.

“Do you know any left-handed, redhead dentists?” she asked. Puzzled, I asked her why. She said when she needs to explain something as rare, the phrase which has become second nature to her is “rare as a left handed, red haired Lithuanian dentist.” I acknowledged that I did not know anyone who fit that particular description and we chuckled, but it started me thinking.

Then, a couple of days ago, AAron sent me the above ad from a magazine and those thoughts came back. END_OF_DOCUMENT_TOKEN_TO_BE_REPLACED 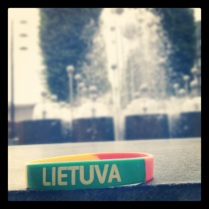 24 years ago today, March 11, 1990, The country of Lithuania declared its independence from the Soviet Union with the Act of the Re-Establishment of the State of Lithuania. It was the first of the satellite nations which had been occupied by Russia to stretch its wings and test the limits of Gorbachev’s glasnost policies.

This declaration was not immediately acknowledged and was even declared illegal by Gorbachev, who demanded the Act be rescinded. 10 months later came the “January Events,” when soviet forces invaded Vilnius’ TV Tower, killing 14 and injuring hundreds more.

Eventually, in February of 1991, Iceland became the first nation to recognize Lithuania’s independence. The United States followed September 2, 1991 and on September 6, 1991, Russia acknowledged it as well.

Lithuania served as a model for other nations and ultimately led to the collapse of the USSR.

A much more detailed, on the ground report can be found here, courtesy of 15min.lt

Happy Independence Day to my adopted home! In light of recent events, let’s keep this flag waving high and remember all who fought to get it there!

Just before my recent trip to America, I received this email from Monika, asking for a specific series of photos to be taken while I was away. Now, Monika and I have travelled together a few times and she knows of my passion for picture taking. And she has one of the driest senses of humor I’ve ever been privy to, outside of 70s BBC night time programming.

So here’s the list, as written, with my photos attached. Enjoy! (My notes are added in red) END_OF_DOCUMENT_TOKEN_TO_BE_REPLACED

So, a few months back I told you about filming this project here in Lithuania. Well now details can be revealed – and a I can let a little bit of my geek flag fly.

As you can see from the picture to the left and the title of this post, the title of the project is The Assets, an 8 part “limited series” airing on ABC starting… well it started last night at 10pm (that’s 22:00 for my European friends)! This is a surprise as I thought it wasn’t airing until summer and they just finished filming a few weeks ago. END_OF_DOCUMENT_TOKEN_TO_BE_REPLACED

A few weeks ago I decided to try something.

I’d been hearing about the various “pay it forward” events which had been happening all over America, people buying coffee for the people in line behind them, paying off layaway Christmas presents for families in need at Target, covering the toll for another car… all these kinds of things.

END_OF_DOCUMENT_TOKEN_TO_BE_REPLACED

Couple of bits of background are going to be needed here… The first is that my friend Monika gave me, for my birthday, a book of 100 places to visit in Lithuania and a red stuffed goldfish with the admonition that I had until my next birthday, July 13th for those of you keeping track, to take a picture of the fish in as many of the 100 locations as possible. She gave her brother the same book (in Lithuanian) and a yellow crab with the same directive.

The second thing you need to know is another friend, Annie, whom I have known for almost 35 years, is visiting from Australia with her partner Brad. The started their trip in Torino, Italy, where Brad was participating in a Beach Volleyball Tournament and then headed up to Kaunas earlier in the week to hang out and visit and see Lithuania. 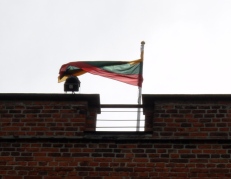 There are advantages and disadvantages to being a relatively new country with a very long history. This is Lithuania. The records go back nearly 1000 years and even the castle in my backyard was first recorded in 1361, but for all intents and purposes, the country came into being in the modern age 22 years ago, when the Russians were finally driven out and Lithuanians could, at long last, rule themselves again.

So how do you celebrate your new/old independence? You have a holiday! Or several holidays. But today is a pretty cool one. July 6th is the supposed coronation day of Mindaugas, the one and only king of Lithuania! It was 760 years ago today that he was crowned and so today, since 1992, has been Lithuanian Statehood Day, a federal holiday!