Belgian timing is not my strong suit. It really doesn’t take long to get from city to city in this small country. So while I got up early and took time to actually take advantage of the free breakfast at Hostel Uppelink and didn’t rush to get the train, I was still in Brugge before 10 am which is when everything actually opens. Okay, not exactly true. The central square was packed with the weekly Wednesday market and some of the souvenir shops, restaurants and their version of a Belfry were open, but the tourist information office, not so much.  END_OF_DOCUMENT_TOKEN_TO_BE_REPLACED

I left Antwerp early… again. Today I was heading towards Ghent, a town I knew had a history. The train ride was only about 30 minutes so I’d get to Ghent early and have all day to explore. Until the train stopped. Seemed that there was a train stopped on the tracks ahead of us and a voice came over the intercom informing us we’d be delayed a few minutes. In Dutch. A nice gentleman sitting across from me translated so I could keep up. END_OF_DOCUMENT_TOKEN_TO_BE_REPLACED

Really wasn’t expecting to go the Netherlands this trip, and yet, here I was, just past 8am, hanging out with fully armed Belgian soldiers, waiting for the train to Rotterdam. As it turned out, our train was delayed so we were instructed to take the following train (which had a change rather than being a direct route). This wasn’t a big deal and they announced instructions in Dutch and English. The problem was the poor Albanian guy who was trying to get to Amsterdam (the ultimate destination of the train which would drop me in Rotterdam). He was having a hard time figuring out where to go so I made sure he got on the right train and then changed where we were supposed to. I left him on the second train. I hope he made it. END_OF_DOCUMENT_TOKEN_TO_BE_REPLACED

Once again, the boys from Jersey had their alarms set. They had overslept yesterday and missed Amsterdam so were trying it again today. The night before, when I’d gotten in, I mentioned the double alarm and gave my permission for one of their number to hit the guy who hadn’t woken with his alarm the day before if he did it again. I figured that was fair. This time, though, I was ready. I realized I had basically six days in Belgium and had spent two in Brussels. I also knew I had a hostel waiting for me for two nights in Antwerp and in Ghent but that I could arrive whenever so it was a flexible plan. But it was cold in Brussels and I kinda wanted to see what else this fair country had to offer. END_OF_DOCUMENT_TOKEN_TO_BE_REPLACED

I awoke with a plan… and someone else’s alarm. There were these four young college guys from Jersey in our room and they were planning on hitting Amsterdam today (it’s a three-hour train ride – something I would remember a couple of days later) and so had set alarms to get up in time to make the early train. Unfortunately, being college guys, they were not to be roused by a mere alarm. Me, however, being an old college professor, I get up at the slightest sound so when his alarm went off for the second time, I was ready to hit the day. END_OF_DOCUMENT_TOKEN_TO_BE_REPLACED 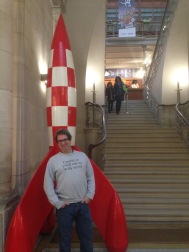 Wasn’t supposed to be here all by myself but them’s the breaks. Rasa was supposed to join me, but they wouldn’t give her the time off work and then sent her to Germany besides, so here I am. Thing is, a couple months back, RyanAir (that bane of the comfortable traveler) had a special and it was either Brussels or Paris for us. Since that was right around the time of the terrorist attack in Paris, we opted for Belgium. Besides, I’d never been before and it was as good a place as any. So I booked the flights and we figured Rasa would get the time off after the three months probation period. At least we hoped so. We we wrong. END_OF_DOCUMENT_TOKEN_TO_BE_REPLACED

New park, new play area! #monki has discovered a trampoline!
Enjoying a nice #night #scootering with the family out on Laisves Aleja.
Monki went to a wedding and cosplayed as the bride, who loved it!
Saying goodbye to the #endlesssummer. All good vacations must come to an end. The #realworld returns shortly!
My friend @un_narrator asked me to post pictures of reading on the beach. Here ya go, brother!
This is 54! #50sarethenew30s #beachlife #SurvivedTheTripAroundTheSun #whatcomesnext
What the fashionable five-year-olds do for their birthdays! #thisis5 #balticsea #vacation
Out for an evening #scoot
Checking out the new ride! #scooterlife #twowheels #bugsinmyteeth