The bus to Manchester left at 5am. This meant we had to be out of the hostel by 4ish and at the train station when it opens at 4:45 or so. That’s early. Even for me with an annoyingly early rising dog. But that’s okay, we’re professional travelers, we got this!

And we did. At the station by about 10 to five and on the bus when it arrived. It was mostly empty that early, so we settled in for smooth sailing down south to the English home of Football. If only it went that way.

What ended up happening in reality was at our first stop they had us change busses (even our driver didn’t know this was happening). The new bus was crowded with school kids (like the girl taking up two seats in order to do her toenails and the crowd of (presumably) drunk, or just loudly obnoxious, boys in the back) so Jennifer and I were separated, each taking a solo seat on the aisle. For the first part of the journey, I slept and read, but then I actually started talking to my neighbor, who was a delightful young math/physics MA student named Sarah and we had a great conversation about time travel and psychology and magic. A delightful way to spend the morning (especially after dealing with the noise of the back of the bus crowd).

Now, the reason we were in Manchester to begin with was the reason for the whole trip. The Manchester International Festival (a biannual art and theatre extravaganza) was in town and they were showcasing a number of theatrical pieces, including Kenneth Branagh’s return to the Shakespearean stage after more than a decade’s absence in a new staging of Macbeth (also starring Alex Kingston as Lady M). The venue was extremely small, with only about 250 seats available per performance and they went on sale back in February and sold out in a matter of minutes. Jennifer happened to snag a pair. So here we were, 6 months later, bussing into Manchester a day early to soak in the atmosphere and prepare for the show. Incredibly exciting!

Jennifer had us booked into an actual hotel (and a damn nice one at that) so we could be well rested for Sir Ken. Seeing him live was an item to be checked off her bucket list (as well as seeing all 37 of Shakespeare’s plays – so this was a twofer) and I was along for the very cool ride. More on the play later, don’t worry.

So we check into our hotel and the first thing we both do is flop on the bed and enjoy an actual mattress. For her, it’s only been a week or so, but for me, an actual mattress is a luxury I’ve damn near forgotten. It was heaven. It was also heaven to have a private space with a coffee maker and in the bathroom… a tub! This is how the other half lives, huh? Sweet!

We eventually dragged ourselves out of the room and headed out to explore the city, stopping first at the Tour Information office. We were hoping to find a location guide for the TV show Life on Mars which is a favorite of Jennifer’s and one she turned me on to (and stars John Simm, who played The Master on Doctor Who, which is just the start of our 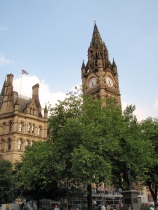 DW connections this trip). It’s a great show and takes place in Manchester. Unfortunately, it was filmed in 2006 so the girl at the information center had no idea what it was. That’s okay, we could make do. We got a map and headed out towards the festival center. We were a day early so we thought there might be something else to see that night. We were seeing signs all over town for various shows, but since the festival was about over, most of the shows had already finished their runs. There was one, though, which looked interesting, called The Machine, about the final showdown between Gary Kasparov and Deep Blue, the IBM sponsored computer.

When we got the the center of town, where the box office was located, we had decided if there were tickets available (and not more than 20 pounds) we would go. Sure enough, there were still 12 pound tickets so we bought a pair and headed out again, thinking we might just take it easy and do something not too strenuous.

A movie seemed the ticket so we found a local theatre inside a former printing factory called “The Printworks.” The Hard

Rock was also here, as were a number of restaurants. We hit the Hard Rock looking for drumsticks and souvenirs then bought tickets to see The World’s End later that afternoon. Before hand, though, we had “mexican” food for lunch at a nearby place. I put it in quotes because it wasn’t exactly Mexican food. Like American food and things in Lithuania – someone had it, described it to someone else who then tried to recreate it. You’re playing telephone with food. So while this claimed to be Mexican… it was a noble effort. 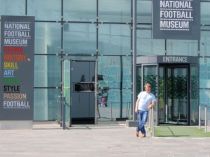 After lunch we headed across the street to check out the British Football Museum. For those of you reading this in America, by football, I mean soccer. And Manchester is home to two of the biggest teams in the league, Manchester United and Man City – The Red and the Blue. These guys make Yankees/Mets or Cubs/Sox rivalries look like little league 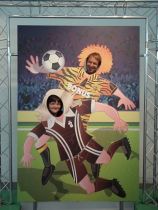 parent battles. The museum was cool, well designed and for non-diehard fans like us, easy to follow and learn from. I’m sure had I been a bigger fan, this would have been a destination in and of itself. Like if I ever end up in Toronto, you can bet I’ll make a special trip to the Hockey Hall of Fame. As it was, we spent about an hour or so wandering the exhibits, oohing at things which needed to be oohed at and generally enjoying ourselves. Although riding the interior funicular down from the top floor was especially cool.

Then it was off to the cinema for a film which isn’t coming out in Kaunas until August, so it’ll suffice to say that I enjoyed it and a full review will be forthcoming. By this point, though, it was rapidly becoming apparent that somewhere along the way I had caught a slight cold so, being in England, we excitedly went to Boots for strepcils and lemsip and all sorts of english medicinal goodness. And then we headed out to find the converted warehouse which was housing the premiere of The Machine.

The Machine was written specifically for this festival and was getting its world premiere here. We were catching it near the end of its run and I was incredibly excited to see something new. The whole premise was as if we were the studio audience at the match, complete with cheesy American sports commentator and the primary set was a desk with a chessboard and a computer terminal. Over the course of the next two acts and two plus hours, we were treated to a well crafted first draft. The staging was very clever, including a manipulation at the end which played brilliantly into subverting the audience’s expectations. The script, on the other hand, was a little long and trying to hard to fulfill too many expectations. It’s as if the writer wasn’t quite sure what he wanted the play to be about and so it was about everything a play like this could possibly be about. There were mother/son, father/son, mentor/student, boyfriend/girlfriend relationship stories. There were political stories, America vs. Russia stories, betrayal of ethics and principles stories. There were too many stories. But like I said, for a premiere, it wasn’t horrible. I’d bet that after this run, the playwright tinkers a bit with it and turns it into a tight exploration of… something. He’s got plenty to work with, that’s for sure.

By this time, it was late and we were tired so we headed back to our glorious hotel room where I delighted in soaking in a hot bath with a paperback Ian Rankin and a stuffy nose. No matter what, I was going to be ready for The Scottish Play the next afternoon.

#monki practicing playing animal #jenga.
Found the place! Another classic photo from #MomentsByMonki
Had to make a quick trip to Vilnius but decided to make a touristy stop on the way home. Photo courtesy of #monki
New park, new play area! #monki has discovered a trampoline!
Enjoying a nice #night #scootering with the family out on Laisves Aleja.
Monki went to a wedding and cosplayed as the bride, who loved it!
Saying goodbye to the #endlesssummer. All good vacations must come to an end. The #realworld returns shortly!
My friend @un_narrator asked me to post pictures of reading on the beach. Here ya go, brother!
This is 54! #50sarethenew30s #beachlife #SurvivedTheTripAroundTheSun #whatcomesnext