As long as we were in the north of England, I had figured we might as well see Liverpool. When we were planning this trip, all sorts of possibilities were presenting themselves but time, cost and feasibility had narrowed things down to flying in and out of Edinburgh with a trip to Manchester and Liverpool thrown in. This was okay by me. I’d never been to any of these places while Jennifer had been to Liverpool and Edinburgh but it was years ago. Jennifer had also take care of planning the latter half of the trip and so she had booked us on an early morning train to Liverpool, about an hour or so away. The idea being to make the most of our day since odds are, we were going to spend most of monday on a train back to Edinburgh for my 6:30am flight back to Kaunas on Tuesday.

We pulled into the Liverpool station and made our way to our hostel to drop off our bags and decide on a plan of action for the day. They offered discount coupons for the Hop On Hop Off tour so we grabbed a couple of those and headed out to explore. The Hop On tour bus had a stop near the hostel, but either we couldn’t find it or we’d just missed it, because according to schedules if we were in the right place, another wouldn’t be coming along for a half hour so we did what you would do if you were in our place (and have been following this blog) – We hit the tourist information office. 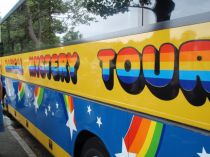 There, we got tickets for the “Magical Mystery Tour.” a guided two hour bus tour (with four stops) which takes you around the various locales important to the early days of the Fab Four because, in reality, that’s the only reason people come to Liverpool as tourists. Yes, there’s a lot of history and culture here, yes, more than 9 million people passed through here on their way to immigrate to the US, but at the end of the day, seeing where John, Paul, George and the rest played their early gigs is the tourist bread and butter of the place. So we headed down to the waterfront and boarded our bus.

The tour was fun and informative. Never being a Beatles scholar, I learned things which made me change my opinion of several songs (Like knowing that “Mother Mary” is actually Paul’s mom, who died when he was a child, completely turns my interpretation of “Let it Be” on its head) and saw the places which inspired several other of the greatest hits. And sure, we got to be tourists, taking pictures at Penny Lane and Strawberry Field. It was a little surreal, to be honest. I mean you

grow up listening to these songs and knowing the real places made me a little tingly. It was a weird experience, but very cool at the same time.

The bus let us off just past the Cavern Club (where the boys started) with coupons for a free souvenir but we decided to go there later and opted instead to follow the advice of Gerry and the Pacemakers and take a “Ferry ‘Cross the Mersey.” The Mersey is the river which provided Liverpool a good chunk of its productivity over the course of its lifetime as it leads directly out to the Irish Sea. This is where all the ocean liners (like the RMS Titanic) built in Liverpool would launch from. There’s been a ferry to get people from one side to the other for more than 800 years and it took Gerry Marsden in 1964 to write a song about it. But since music was the food of life here, the ferry itself was now a tourist attraction, taking an hour to cross the river, hitting three docks while making it’s circuit, all the while giving a taped commentary about the area.

We had decided to get off at the first stop, Birkenhead, to check out the Spaceport, a science museum which claimed to have a special Doctor Who themed exhibit on time travel. Since whenever Jennifer and I get together in the UK Doctor Who becomes a unifying theme, this seemed like a no brainer. If only. We arrived just in time to be the last people in the building and to be fair, if you’re three, this was probably an interesting place to see. The ground floor was solar system information, somewhat interactive, but generally feeling like a portable exhibit taking up residence in the local library’s community resource room. The upstairs, where the time travel/Doctor Who exhibit was, was a collection of mostly replicas (from the newer incarnation of the series) and mothballed masks and costumes from the original run. It wasn’t so much that it was disappointing in and of itself, but after seeing the Doctor Who experience two summers ago, well, yeah,

it was disappointing. To make matters just that much more interesting, we missed the ferry back (had to wait an hour for the next one) and there was nothing to do in this part of town. When I asked a local policeman if there were a Starbucks or some such nearby, he literally laughed at me and said “There’s No Starbucks in Birkenhead!” So we waited in the ferry port building and wrote out postcards and waited for the return of the Ferry to take us back across the Mersey.

Back in the waterfront area (where we discovered it was Pirate Days, which accounted for the high number of kids in costume and the incredibly loud cannon fire) we figured now would be as good a time as any to grab some souvenirs and check out the huge Ferris Wheel. The shops were fun and, as expected, full of Beatle stuff. If you wanted to decorate your entire house in off the shelf Beatle paraphernalia, this would totally be the place to do it. It was just crazy. I settled for some pins and postcards. Then we passed an art gallery where Jennifer picked up a great deal on a historical Liverpool print and I debated a very cool Strawberry Field piece of art but in the end, just couldn’t justify the cost as well as the hassle in getting it into my one bag for the flight home. Ryan Air’s one bag, 10 kilo limit plays hell with souvenir buying. Great for my pocketbook, though.

The Ferris Wheel seemed like a fun idea and since it was after 7 at night, it wasn’t crowded at all. We were able to walk up 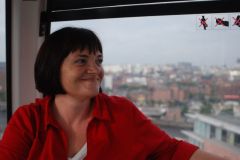 and get a car to ourselves. The overview of the city at twilight was beautiful and I got some great pictures. It was also a great vantage point from which to see tho two main cathedrals in town, both on opposite ends of the same street, Hope. The Anglican one looks like a medieval castle, all brick and imposing while the other, a Roman Catholic one, looks like nothing so much as Space Mountain. It’s really an amazing contrast in style. After going around several times (I’m convinced we got more than normal since there was no one else around) we found ourselves back on the ground and knew the time had come. We had to make our pilgrimage to The Cavern.

The Cavern Club is probably the most famous rock and roll venue in the world. In the 70s, it was destroyed to create a ventilation system for the Underground but then was rebuilt, with about 75% of it being original and the rest extended out. Still there is the small stage where The Beatles were the de facto house band, playing over 200 gigs (starting pay, 5

pounds, ending pay 300 pounds). There were also tributes and statuary to the band and a souvenir stand to make sure all your Cavern Club merchandise needs were met. We exchanged our vouchers for complimentary post cards, picked up some remembrances of our brief time there then headed back up to the daylight to walk along Beatle street where other statues and commemorative plaques told the stories of the town’s most famous residents. We did see the statue of Eleanor Rigby and walked past the Hard Day’s Night hotel where the Fab Four were posed as some sort of paisley’d caryatids.

Before heading back to the hostel for the night, we stopped for a brief bite at a famous Scottish establishment: McDonalds and were delighted to see the manager, who could have given Tyrion Lannister a run for his money in both height and cunning summarily kick out a group of drunk birthday party revelers. The hostel was nice, and we had a private room (in which the less said about the confusing lighting system the better) and we spent a good deal of the evening hanging out in the common room, chatting with nice girls from Switzerland and Spain and an annoying lad from Belfast. But again, we had to get to sleep early because we had another early morning, this time we were heading off to the John Lennon airport for a flight to Dublin.

Stupidly excited about @marvelstudios @lego #minifigures! Just got my first one, #zombiecaptainamerica
Happy Saturday #rainbow
#familyportraits #feedingthepigeons #sunday
I was interviewed for Kaunas Full of Culture to talk about #comics and #comicbooks . (Coming soon the English Version) https://issuu.com/kaunaspilnaskultros/docs/kpk_2021_10_lt/38
He instantly regretted showing the 5yo “Dirty Dancing” #nooneputsbabyinthecorner
This is what #monki is having for dinner. She likes food that stares back!
#monki practicing playing animal #jenga.
Found the place! Another classic photo from #MomentsByMonki
Had to make a quick trip to Vilnius but decided to make a touristy stop on the way home. Photo courtesy of #monki