I recently returned from an amazing 9 day trip through Scotland, Ireland and Northern England and in the past, I’ve travelled through most of Europe and quite a bit of the United States. I’ve stayed in a number of hostels and while some experiences have been better than others, I had one on this last trip which ranked so far down the list, I felt the need to actually write a bit about it – and the hosteling experience in general.

To start with the bad… The hostel in question here is The Belford Hostel in Edinburgh, Scotland. I’ll get to why they rank so low in a moment but first, a word about what, in my opinion, makes a good hostel and where this one fails (and the one place they succeed).

A hostel is a cheap accommodation, normally for young (<26) travelers. The rooming situations are more often than not dorm type situations, where anywhere from 4-12 beds are in a room and you have no idea who your roommates might be from night to night. Amenities offered can be anything from a central hang out room with a TV to free breakfast to organized pub crawls and city tours. You can usually stay for a night or months. Often, if you’re staying for a while, the owners/operators will offer an exchange of services (cleaning, manning the desk, etc) for rent. They are a great place for budget conscious travelers to bed down for the night and I’ve even met some great friends in hostels over the years.

It has seemed to me, as I traveled around, that a lot of hostels were run, if not owned, by people who enjoy traveling themselves. People who understand the needs and desires of backpackers and students trying to see the world. Now, though, it feels like the people who are running hostels are looking at them as a low investment/high return business model with little thought to the day to day operations or the actual needs of their clients.

Let’s take a look at The Belford Hostel now. I found and booked the room through a website called Hostels.com, a site I’ve used before with generally positive results. I looked through the description of what they offered (free wifi, centrally located, housed in an old church) and made my reservation. Before our arrival (I was traveling with a friend), there were even some slight hiccups on my end and they were very nice about things. I was really looking forward to our stay. Upon arrival, before our check in time, we wanted to drop off our luggage (one of their offerings was luggage storage) and the woman at the counter, while competent enough, wasn’t terribly friendly. That’s okay. Not everybody is Susie Sunshine, especially before 9am, so we dropped our bags and headed out for our first day. 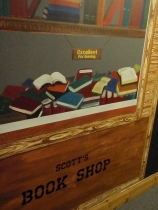 Upon our return, when we actually had the opportunity to check in, things began to go slightly askew. The place is, indeed, a converted church. But rather than make any use of this architecture, it felt like the 70s when offices would move into listed buildings and slap up acoustic ceiling tiles and cubicle partitions and lose any charm or personality the building itself had. Here, it was even worse. The paintings along the corridors were designed to resemble a run down neighborhood high street with a bookstore that offered the advice “Excellent for Burning,” a Ted style bear mooning you (furry hands spreading hairy cheeks), and a tattoo/body modification shop featuring a mohawked woman wielding a bloody ax. Even if your idea of humour lends itself to laughing at films like Hostel, this really isn’t an inviting atmosphere for anything.

The room itself, a 6 bed dorm, was a sty. Now, this isn’t the hostel’s fault, I know, but something you have to deal with when sharing rooms with unsophisticated (and as we found out later, often drunk) young men. The problem was trying to get through all of the various accoutrements to be able to open our lockers and stand in front of our assigned beds. And to find the power outlets. See, this room, which presumably had been built for the purpose of housing groups of weary travelers who, in this modern era, were globe-trotting with cell-phones, laptops, tablets, digital cameras and whatever else kinds of electronic equipment you might have, had only two power points for the six beds. Someone had run a three outlet extension cord across the room, which, amid the clothes and shoes and suitcases strewn everywhere was a little bit of a safety issue. Then there was the problem of trying to charge various devices. Others in the room wanted the same power we did, so it wasn’t uncommon for someone to unplug your device to plug their own in. The hostel’s solution to this was a couple of 6 outlet strips in the large common room downstairs. This could be okay, considering the common room was ostensibly the only place you could actually access the free wifi. So down we’d head to charge up and check in…

Except we couldn’t. The hostel manager, who had already set aside an enclosed room for TV watching with a sign which instructed that computers and phones were NOT allowed, also unilaterally declared that the wifi would be turned off nightly between 7 and 10pm to ” For eating and conversation purposes (to prevent zombification).” This is an admirable idea, no doubt. And certainly setting aside a room where you ban Internet is fine. But this causes two problems for me. 1) it means you’re lying in your advertisements about free wifi if you don’t specify the rules and 2) who are you to tell me when I need to socialize and eat and that if I don’t do so, there is something wrong with me? There were a number of people who were sitting downstairs, not talking to anyone mind you, waiting for the 10pm turn on so they could make travel plans for the following day, consult bank balances to pay bills or check in with their children half a world away. And of course, it wasn’t always exactly at 10pm. One night, the Internet didn’t return until almost 11 and even then, it was spotty at best. Absolutely unacceptable.

Now, on the good side, down in the very large common room, there was also a very large kitchen which is great if you want to save money and prepare your own meals with purchased groceries. There’s a large sign above the several medium size refrigerators admonishing that they will be cleaned out every thursday so if your name isn’t on your food, it will be considered communal property or thrown out. Fair enough. Except if you looked in any of the fridges, you would be hard pressed to ascertain when they were last cleaned. The stench every time one was opened was overwhelming. So while the facility appeared a plus… it’s a hazy one at best.

The security was another issue. There was a coded entry system which is great…unless they decide to change the code in the middle of the day without letting anyone know. This wouldn’t be bad if there were a 24 hour staffed desk, but there isn’t during the week. Luckily, they day we returned and needed the code, we could eventually rouse the single staff member away from her other duties to let us in and show us the new code. This was after waiting outside for several long, uncomfortable minutes.

Finally, a word about showers and restrooms. I don’t mind separate facilities for the two functions. I don’t mind facilities separated by gender. I even don’t mind a walk to get to these things. I would, however, appreciate some proximity. The male showers were as far as you could possibly get from the toilets within the building. So if you get up in the morning and decide to relieve yourself before you shower, you end up walking across the building, twice. The rooms themselves were slightly mildewed and there was no temperature control, just a timed plunger which would allow water to flow for 20-30 seconds at a time.

As I’ve said, this was the worst hosteling experience I’ve ever had. Absolutely nothing made me feel welcome, comfortable or at ease. I couldn’t get out fast enough and would certainly never recommend this place to anyone. Damn shame, too, because the exterior of the building is amazing.