Happy Anniversary to me… 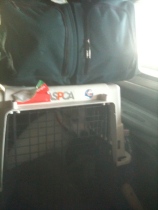 In 2010, on this date, I packed up some of my belongings into one too many suitcases, loaded a dog into the hold of an airplane and headed off for a small town in Hungary, with absolutely no idea what I was getting myself into. Now, I’m one year past my original expiration date – my original contract being for a single year with a one year extension option. I didn’t exercise it and instead, headed north to Lithuania (I didn’t know where it was, either) to take up my new life as a university docent (associate professor). I’ve been in Lithuania now for a little over two years, having moved to Vilnius for a few months in June of 2011 and into my flat at the beginning of August that year. I’m also a few days away from beginning my 3rd year at VDU.

I’m not sure why this anniversary seems like a big deal to me, but it does. This morning I went with my 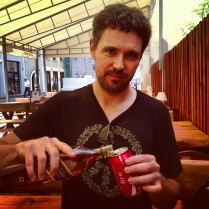 friend Al (an American who’s heading back to the States after being here 15+ years) to ensure I was in the system to make sure I could get health care when and if needed (there was a problem a few months ago when I didn’t exist – but I do now, so it’s all good). Next week, I should get my second 1 year resident permit card (after 5 years, I can apply for a permanent card… which is valid for 5 years – this is what passes for permanence here). Also, after 3 years, people have begun slightly changing their question from when are you coming home to when are you coming for a visit.

In the past three years, I’ve visited America just once. I still keep up with local and national happenings through friends and international news services but it seems like it’s getting further away. I’m missing out on popular culture, societal in-jokes. When I came back to Kaunas last time, I was talking with my friend Monika about where “home” was and she said simply, “here.” And she’s right. And she’s wrong.

Home is a strange concept. With Al returning to America, he and I have been talking about the differences in life-style he’s going to experience. Things we complain about here (“In America….”) which are common place there. It all makes me think of where I’m going and what I’m doing. My standard answer when someone asks how long I plan to stay in Lithuania is “until I leave.” which is accurate as far as it goes. I like it here, I really do, I like my job and I have friends who would miss me if I left. In short, I have a life here. But is it home? Not speaking the language is a certain obstacle to someplace truly being home, sure, but I could change that. I could take more language lessons. After two years here I can order my coffee the way I want it and can follow along some very simple conversations. I can read better than I can hear and speak. But if NOT speaking the language is an obstacle, is the corollary true? Would I be “home” if I spoke the language fluently? I don’t think so. So I’m not sure what makes a home, “home,” but at the same time, I’m not sure when the last time I felt like anywhere was home.

Thanks to modern technology, I’m able to keep doing my second job and write articles for several magazines and have video conversations with friends all over the world – but at the same time, I see old friends at parties I know I’m invited to and having a great time. I see people in photographs who I never get to talk to from here, but I would if I were there (wherever “there” is, since “there” is becoming a bigger place the more I travel). My stuff is in a storage shed and my walls are only now becoming less bare. I’ve dealt with friends becoming enemies and had the amazing experience of relative strangers becoming very close friends.

I feel like I’m living in state of constant flux, not knowing what the future holds (I know, none of us know, but some have a better idea than others) and most of the time I’m okay with that. But on days like today, which mark milestones, that’s when I start to question.

So, just for fun, what have I done in the last three years?

Interesting when you see it by the numbers. Additionally, my TV consumption has dropped considerably since I don’t watch on actual TV anymore. I haven’t actually turned on my TV in almost two years (the last time I tried to watch TV at home was during the Eurobasket in September of 2011). Instead, I download everything I want to watch. This means I can watch what I want when I want to, which is nice. It’s the same as DVR but by downloading, I never see the commercials or common advertising so I have no idea what’s coming up, what’s popular or anything else. I’m not sure I could go back to watching TV normally.

I miss not having bookstores to browse. A lot of my reading now is done on eformats or audio with the welcome exceptions of cheap classics I’ve been able to find here or the wonderful care packages sent by friends. Tuna fish in water and decent peanut butter is hard to come by and expensive when you can find it, but otherwise, food in general is actually much cheaper. I can go for a really nice steak dinner for less than $20 American.

And the fact I still think like this is what makes me question it. The fact I still (not always) translate things in my head, be it money, distance, or temperature (although I’m getting good at thinking in celsius) leads me to believe my assimilation is hampered more by this mindset than language. I think I would have the same problem in the UK or Australia even though language is (basically) the same.

Ultimately, I think “home” might be where you settle down, where you resolve your destiny. Be it ancestral or self-chosen, it’s the place where you can look around and say “I don’t want to leave this place.” And while I like where I live and what I’m doing, and I don’t foresee myself leaving, I don’t look around and say that. I’ve never said that.

Maybe I never will.

But for now, I’ve been here for three years. My resident visa is good for at least one more and my passport (while needing new pages) is good for another three. So I’ll keep checking in, and you do the same, and together we’ll enjoy this crazy ride.