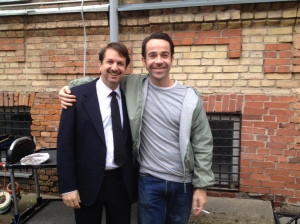 So about 6 weeks ago, I got a weird email from someone saying they were casting for a movie filming in Vilnius and would like to know if I was interested in auditioning for a small speaking role (basically, they needed native English speakers). I agreed and we set a time for me to head to Vilnius.

To be honest, I didn’t think much about it, figuring it was some sort of student or sample thing, the kind of thing I get asked to participate in from time to time. So I went to the audition, in Vilnius, read in front of a camera, remembered why I’m not an actor, thanked them for their time and headed home (a little over 6 hours door to door – there and back).

Then I promptly forgot about it.

Little less than a month later and I get another message: Would I be available for filming in early November and would I mind shaving my beard. I got cast!

Again, this wasn’t due to my great acting abilities, but, like Greg Brady becoming Johnny Bravo — I fit the suit. In this case the suit was a language but that’s okay. It was still gonna be fun… and I got paid and everything 🙂

So arrangements were made and I headed to Vilnius on Thursday the 7th for my costume fitting. It’d been a while since I’d been on a film set and the organized chaos was a little bittersweet – on one hand, it felt like a homecoming, like I was back where I belonged. On the other hand, I like my job and what I’m doing. To drive that point home, I’d gotten an email the night before from a former student explaining I had “created a monster” because when I had told her she could change the world, she started to believe me. Gotta say, that trumps (even if it’s only slightly) the fun of working on a film set.

Wandering the production hallways was fun, and since the show is about the cold war and spies, the old Aldrich Ames days, the amount of wide lapels and polyester was overwhelming. My scene took place in 1983 and I was playing a store clerk so I was decked out in a black polyester suit, white shirt, black (clip-on) tie and shoes which I’m not sure were every actually fashionable. I tried everything on then stood in front of the costume designer, who was harried and running around like all good designers should be. She looked at me from down the hall as she was running from one emergency to the next, paused ever so slightly, nodded her head then said she wanted to see a blue tie as well and she was off. My costumer grabbed a blue tie and put it with the hangers she gave me for re-hanging my costume and I was left to disrobe and head over to the make-up trailer.

In make-up, a nice woman whose first job in the industry was working on Robin Hood, a show I wrote for

The next day, the 8th of November, I headed back to the set for a 7am call. No problem! Like a good actor I was early, grabbed a cup of tea and headed to wardrobe. I climbed into my salesman suit and made my way to make up where I was introduced to Jonjo O’Neill, who was playing the spy I was to be helping out in my scene. Talk about a nice guy. We sat and chatted while the make-up dabbed a bit of something on my face and darkened may ‘stache. Before to long, I was good to go. Of course, just because I was good to go does’t mean every one else was. as Jonjo pointed out, what they pay actors for is the waiting time, not what we’re actually doing. So we end up shooting the breeze for a while. Turns out he’s Irish but has been living in London for a long while and is a member of the RSC. So as we talk, naturally, we have a friend in common. Okay, not necessarily a friend on my side, not anymore, considering she was/is a friend of my ex, but still, someone we knew in common. We had a laugh about that and eventually headed to the location for our morning’s work.

The location was a Benetton shop and by the time we got there, the art department had worked their magic and it looked like a regular English language shop. We got set up, I met the director, Adam (who, understandably, kept forgetting my name), the DP Jake and the rest of the crew. We blocked out the scene a few times and almost immediately, my one line was cut. Made me wonder what they needed a native speaker for, but that’s okay. I ended up giving myself another line which worked.

I did notice, though, that Adam had a lot on his mind. So much so that he tended to forget the blocking he’d given people from set-up to set-up. He’d move people around and have them doing one thing in one set-up and something different in another. Now, I realize this is a very small scene, it might not even make the final cut, but I think he might have a hard time cutting it together. That, and he kept putting the hood of his sweatshirt on his head. At the end of the day, he seemed like a nice guy (he let me keep one of the two lines I came up with) but he also seemed a bit nervous and hesitant, while trying desperately not to come off that way. My fingers are crossed this works out for him and he gets to do more.

After we finished the scene, I said good bye and headed back to the production office to get my own clothes and head off to my real job, teaching kids how to be film writers and directors – that was a bit surreal, let me tell ya. Certainly a fun day. Maybe I’ll get a chance to do it again sometime.

#monki practicing playing animal #jenga.
Found the place! Another classic photo from #MomentsByMonki
Had to make a quick trip to Vilnius but decided to make a touristy stop on the way home. Photo courtesy of #monki
New park, new play area! #monki has discovered a trampoline!
Enjoying a nice #night #scootering with the family out on Laisves Aleja.
Monki went to a wedding and cosplayed as the bride, who loved it!
Saying goodbye to the #endlesssummer. All good vacations must come to an end. The #realworld returns shortly!
My friend @un_narrator asked me to post pictures of reading on the beach. Here ya go, brother!
This is 54! #50sarethenew30s #beachlife #SurvivedTheTripAroundTheSun #whatcomesnext