Belgian timing is not my strong suit. It really doesn’t take long to get from city to city in this small country. So while I got up early and took time to actually take advantage of the free breakfast at Hostel Uppelink and didn’t rush to get the train, I was still in Brugge before 10 am which is when everything actually opens. Okay, not exactly true. The central square was packed with the weekly Wednesday market and some of the souvenir shops, restaurants and their version of a Belfry were open, but the tourist information office, not so much.

I wandered the market until the bells signaled 10 o’clock then went to get my local map. Here, the self-guided tours (plural, there were three of ’em) were in a €5 book. I bought the book and asked

about a guided tour. Yes there was one, at 4 in the afternoon. “Seriously?” I asked. This is still January, when the sun goes down around 5 so half the tour would be in twilight or darkness. I was assured this was, indeed, the correct time. Okay. Noted.

I asked the Information desk guy what he would recommend then. If I was planning on taking the guided tour, which of the tours in the book I should do on my own. “What would you do?” I asked him. He shrugged non-committally and said “I don’t know.” Incredibly unhelpful guy. Eventually, we determined that self-guided tour number one covered a lot of what the guided tour covered and self guided number three was the longest (about 4km) and took you outside the city center so that should be the first choice. Done.

As always, the tour map was on the first page of the tour while the descriptions followed in the next several pages (there was also a full, folded city map glued to the inside back cover) so I situated myself to follow along and headed out. This particular tour takes you along a lot of the waterways which criss-cross the city and then led along the main canal which showcases a lovely park and

four windmills. We passed several museums as well, except… January. They were either closed for the season or the day or not open until later in the afternoon, which meant I just walked and read and observed. The tour ended at a cozy little bar restaurant with a resident dog (signs everywhere asking you not to feed the little guy, who was getting out of the cold by sleeping on a chair next to the stove). It was too cold for a beer so I had a hot chocolate with some rum to warm me up

before I continued on my way.

As I was leaving, I passed a couple looking around, with the guidebook in their hands. I pointed out the place they were looking for, where I had just left. “How did you know?” They asked. “I’m doing the same thing,” I explained and help out my own book. We both shared a laugh and then each continued on.

climb to the top of the belfry. See, I had first been introduced to this city in the 2008 film In Bruges and the belfry plays an important role in the film, so I knew I had to see it. I paid my money and headed up. As opposed to a lot of attractions, they were very specific as to not only how many steps there in total (366) but at the various landings and rooms, they let you know how many were above and how many below your current position. Made it easy to track your progress and not feel like you couldn’t make it. There was always a “look how far you’ve come” enthusiasm to the signs. In honor of Rasa and my joint to Italy when everything was about the

stairs, I was determined to not only make it to the top, but then to brag to her that I did it. Mission accomplished!

On the way down, I stopped for a few seconds to check out the carillon controls, which are wooden sticks,played by hitting them downwards (the belfry in Ghent had an informational video about how carillons were played so I understood what I was looking at). I made it back to the bottom (a busker wanted to cut me a silhouette but me in a knit

cap and a winter coat didn’t seem to make any sense) and decided to try my hand at self guided tour number 2.

This tour went in the opposite direction of the first without any overlap. Despite my annoyance with the tour information guy, the tours were actually laid out nicely. This one started at the Church of Our Lady, which, unfortunately, was undergoing renovation. On the plus side, though, the admission price was slashed. The big claim to fame of this particular house of worship, though, is the sculpture of the Madonna and Child by Michelangelo. It’s one of the few pieces which legally resides outside of

Italy. The church also holds tombs of the bodies of  Charles the Bold and his daughter, Mary. Ultimately, the fall of Brugge as a power can be traced to the untimely death of Mary.

I continued around my tour, meeting a lovely former tour guide named Martine, with whom I shared a great conversation about the sites to see as well as a bit of personal history of the city, which made the rest of my tour a bit

more insightful. I saw the Potato Museum, the two remaining wooden houses in town (they had been outlawed after a huge fire) and several statues commemorating the artists of the area, including Jan van Eyck and Hans Memling. This time, the tour ended back near the main Market Square and I was hungry, so I stopped in to a fry place and had lunch.

My walking tour would be starting soon so I headed down to the main information office to buy my ticket and wait. Again, it looked like I might be alone but, like last time, I was thwarted from a private tour at the last-minute. This time, the couple was Cliff & Antoinette who were on their honeymoon from the U.S. (and in fact, today was the four-year anniversary of their first date) and our guide was a school headmaster called Michael (pronounced Michel). Being just the four of us, it was easy to talk and learn a fair bit of information about what was going on around us.

Michel pointed out the animal (or other illustrative) motif on tops of a lot of the buildings, explaining that this was how the buildings were identified since it wasn’t until the French came in during the 18th century to put numbers on them. He also showed us how people would create larger facades in order to give the impression of much greater wealth (like anyone who drives a BMW 3 series).

We were also introduced to the concept of “Almshouses.” The idea here was for rich people to do something for the community by building these small houses which surrounded gardens. Any time you saw “Godhouse” or “convent” over the entrance to an alley, it meant there was a city park with homes for elderly or infirm open to the public nearby. And these low-cost homes are still operating today.

As it started to get dark, we came across the local brewery for Bruges Zot. Seems this is the only brewery still in operation within the city walls, but even they don’t bottle their product there. Instead, they truck it out to the plant which is several kilometers away… at least they will until this summer when the crowdfunded “beer pipeline” will start flowing. Seriously. Online Belgium do the people crowdsource the money to help the local brewery in exchange for free beer (and no, contrary to popular belief, you can’t run a tap into your home).

At full dark, we were still touring, but saw something you won’t get see if you tour in the afternoon. See, like the Tower of London and the Ravens, Brugge has its own totemic animal, the swan, with its own attached legend. What that means, though, is that the swans are provided for by the city and are free to roam the waterways. I’d seen them several times throughout the day, swimming mostly in pairs. But at the end of the night, there was a mass swan migration to the place where 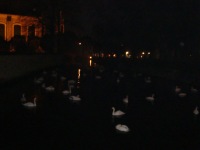 they all came to sleep (and in spring, to spawn). Seeing dozens of swans in the dark of night was inspiring.

Our last stop on the tour was at the Lake of Love. There is a legend about lovers and meeting there and all that, but I like Michel’s story better. He explained that the word  “minne” is, in fact, the old Flemish word for love… but it could also mean monster. Victor Hugo, when writing a guide-book about visiting the city, mis-translated it into “amour” and so it became the Lake of Love but really should be Monster Lake. I’m gonna stick with that one, myself.

Heading back to Ghent for the night, I went local for dinner and ended up in an Irish pub having a burger just over the bridge from the hostel. Since it was my last night in Belgium, I decided a beer would be appropriate and ordered a Brugse Zot (which means Fool of Brugge and has a jester as

the symbol – I really had no choice). It came and it was quite good. But then I remembered there was a big rivalry between Ghent and Brugge and Ghent had their own beer, Gentse Strop. See, anything historical has a beer made in honor of it and in this case it was that the Ghentians had rebelled and been made to

parade around the city with a noose (“strop”) around their necks. It was also on the place mat under my dinner. I felt like an ass so ordered one of those as well. Again with the two beers and I was out like a light when I hit my bunk.

The next morning, my last in Belgium, I packed and headed back to Brussels. The plan was to meet up with Alex and Sara, who used to be neighbors back in Santa Monica but who I also hadn’t seen in maybe 12/13 years and who had been living in Brussels for the last decade. We decided on Le Tram de Boitsfort, a burger joint housed in an old street trolley. I

found the place, and it was so great to see them again. It was like no time had passed.

I forgot to get a current picture, so here’s Alex and Sara from 14 years ago – they totally look the same!

And it was a perfect way to end my time abroad.

(we’re not going to mention the late flight back to Vilnius where I missed the last bus and had to take a taxi the 100km home, but at least I slept in my own bed that night).