Sunday in the park with a reluctant dog

While the debate about when spring actually starts, yesterday, Easter Sunday, was a truly lovely day. We decided to take a much needed break from work and go for a walk. And we decided to take Laika with us.

This is where it gets strange. Laika is the only dog I know who doesn’t like to go for walks. He’ll go out in the morning for a long, rambling walk. I usually don’t have him on a leash because it’s early and he kinda just goes wherever he wants and I just follow along. Some days we’ll walk for almost an hour, some days, ten minutes. We almost never go the same direction twice in a row.

After that, though, he often won’t stray out of our yard. He’ll go out to do his business, but that’s about it. And when he’s done, he heads home. He knows where home is.

A few months after we first moved here, in October of 2011, I took Laika for a walk and at the same time, took the garbage out (garbage is centrally located so you have to walk a ways to your local depository). At one point, I lost sight of him and that was it, he was gone. I spent the next hour wandering around, looking for him. Occasionally I would wander back towards our door to see if he had made it back to the yard, but no dice. Eventually, it was getting dark and chilly so I headed back home to get a coat and continue the search.

As i climbed to the fourth floor, who should be waiting for me in front of our apartment door looking at me as if to say “dude, what took you so long?” So this is him.

A couple of times I’ve taken him out in the afternoon and he doesn’t get very far before he’s turning around and heading back for the house. Most often, I let him go. He’ll never get so far ahead that he can’t see I’m coming, then he’ll run and wait by our outside door. I go back upstairs, let him in, then go back down and carry on with whatever I was going to do, just do it without him. This has been the cause for a lot of laughter amongst those who know him.

Yesterday, though, yesterday we were determined to take him for a walk. The thinking being that come summertime, when the little one is here, we’ll be going for walks so he should learn to come with. So we put his leash on and armed with a pocketful of treats, out we went.

Sure enough… within minutes, he was planted firm and not moving forward. Out came the treats and he moved forward — a little bit. Of course as we walked, he would subtly head towards home until that strategy conflicted with where we wanted to go and then once again the treats would come out and we would coax him towards our goal.

At the end of the walk, we gave in to him a little and didn’t go quite as long as we wanted, but certainly longer than he did. The most interesting part though, was last night and this morning, he’s been much calmer than normal. I think this is good for him and we’ll do it a few more times as the weather warms up. Wearing him out is probably good for everyone involved. 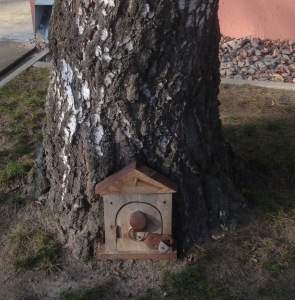 However, one of the cool things we saw around town was a Fairy Door. When I first heard about these, I knew this was something I wanted to do when we had a child and now that one is coming this is definitely going to be a thing. With that in mind, it was pretty exciting to find one in the wild. Especially not far from home.

Maybe, when the time comes, the fairy who lives here will be friends with one who comes to live with us.

6 thoughts on “Sunday in the park with a reluctant dog”