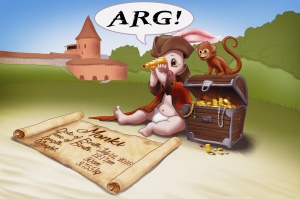 So at 3:30 in the morning on July 12th, Rasa wakes me up to say “it really hurts” and we should probably go to the hospital. Granted, we were scheduled to be there at 7am anyway, so our 3:30 wake up call was only 90 minutes ahead of schedule. Turns out, we needed the extra time because when your wife is in labor, the movies just don’t do it justice. There’s no madcap dashing about trying to flag down cabs or traffic cops pulling you over only to turn on the sirens and lead you to the hospital once they’ve learned the full extent of your situation. Nope. It’s a lot of coaxing someone who can barely walk down three flights of stairs and calling a friend to come and make sure the dog gets taken out so you don’t come home to an “extra” surprise.

There’s also a few other things Hollywood doesn’t tell you about the whole “giving birth” experience.

What they do get right, of course, is the love for this new child…even if she does disrupt your sleep patterns and doesn’t let you write for a few days.

13 thoughts on “The Monki Has Landed”

Enjoying a nice #night #scootering with the family out on Laisves Aleja.
Monki went to a wedding and cosplayed as the bride, who loved it!
Saying goodbye to the #endlesssummer. All good vacations must come to an end. The #realworld returns shortly!
My friend @un_narrator asked me to post pictures of reading on the beach. Here ya go, brother!
This is 54! #50sarethenew30s #beachlife #SurvivedTheTripAroundTheSun #whatcomesnext
What the fashionable five-year-olds do for their birthdays! #thisis5 #balticsea #vacation
Out for an evening #scoot
Checking out the new ride! #scooterlife #twowheels #bugsinmyteeth
Grades are done, it’s the #endofsemester!