Like a Fish Needs a Race Car – 2017 Summer Holiday 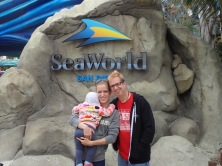 Saturday was reserved for Sea World. Like the Zoo, we were again in a situation of several groups looking at different things. And since we were on baby schedule, no one wanted to stay with us for long (mom and dad stuck it out for a bit, but then they wanted to go see other things, too).

For the most part, it was a fairly casual day, as days at Sea World often are. Usually, the biggest stress is getting in to see the shows, watching dolphins jump and sea lions cavort and such, but since Monki wasn’t about to sit still for the 15-20 minutes of the show itself, let alone the additional 20-30 minutes of waiting in the seats, that really wasn’t much of a concern for us. Instead, we went through the exhibits where she could look at things and then move along.

There was a new (for me, at least) turtle exhibit (where the manatees used to be) which Monki quite liked, and the penguins, which entranced Rasa. There was also a new roller 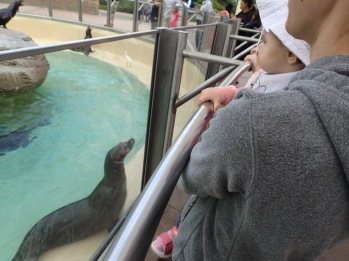 coaster, called Manta, which I went on while Rasa and Monki went to look at killer whales and sea lions. The coaster was fun, whizzing through the limited real estate of the park after a 30 second build up and launch in an immersive tunnel featuring some pretty cool screens, which surrounded you on all sides. The technology was impressive and I think there’s some applications here which can be totally developed and exploited for entertainment purposes in years to come.

Meanwhile, the girls were having a blast. Monki was communicating with a barking sea lion and Rasa narrowly avoided getting soaked by a playful orca. 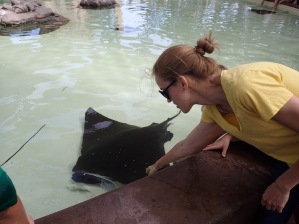 When I got off the ride, we did the usual – fed the bat rays and walked through the Shark Encounter. For Monki, though, the best thing, like at the Zoo, was stopping to pick up leaves off the ground. It didn’t matter what was going on around her, no matter how amazing the sea life, she was far more interested in a dried leaf she nearly stepped on.

Eventually, we met up again with everyone else to see the Shamu show, through which Monki lasted about 8 minutes. But I did get a cool squid hat, so that was a plus! By the time the show ended, though, it was getting late for us, so we said our goodnights, leaving the family to enjoy the night time festivities. 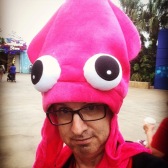 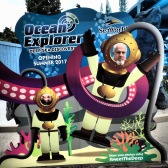 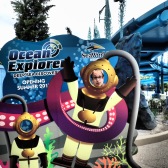 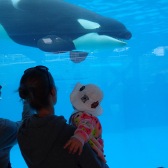 With mom looking at Shamu

We left the park and headed out for dinner at the Denny’s near the house. Denny’s is easy and we know they’ll have food for everyone, since Monki was being particularly fussy about eating. Seems she was going off her “baby” food. Any of the porridges that Rasa was making just weren’t good enough for her, nor were the pouches we discovered at Target that first day. Instead, she of the 4 teeth had decided that big people food was what was for her so anything we were eating, she wanted a piece of. At least at Denny’s, there was always pancakes to eat and sweetener packets to play with.

After dinner, though, as I was paying the bill, I noticed a shop across the street with a line coming out the door and extending half way down the block. I asked the guy ringing me up what the story was.

“That’s nothing. I’ve seen it go all the way around the block so the people at the end are back looking in the window.”

So the Baked Bear went on our “must do” list and we told the family about it when they got back. We figured we’d all go the next day. 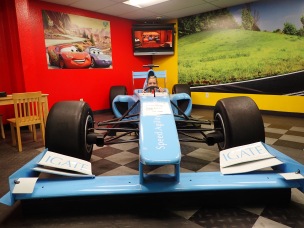 Sunday was going to be our last full day in San Diego. The rest of the family had planned a beach day but there were still a few things on our list to do – one of which was the San Diego Automotive Museum in Balboa Park. If you know Rasa, you know she’s a huge F1 fan and an aficionado of cars in general. We even arranged our trip in Italy and London to make time to visit the car museums there so making sure we hit the car museum in SD was a no brainer.

While it was small, it held a nice collection of vintage cars, modern day miracles and a fine smattering of motorcycles as well. Not a lot of curation going on, but that was okay. The highlight, though, was an open wheel race car you could actually sit in – and Rasa did. 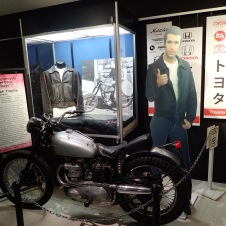 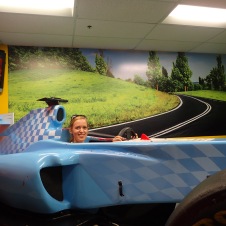 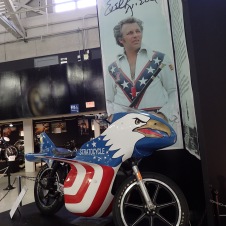 On the downside, though, Monki wasn’t thrilled with the idea of looking at cars and not riding in them, so while we did get a chance to see things, we had an angry baby a good deal of the time. When she fell asleep, we thought we’d try to see the Air and Space museum, which was right next door. Unfortunately, she woke up.

We tried to feed her at the museum’s Flight Line Grill (which was literally on the flight path heading towards the San Diego airport) but she wasn’t up for it. A brief run through the exhibits merely showed us it was a place we’d want to go back to. There was a lot of aviation history on the walls, and a lot of reading to place it all into context so yeah, in retrospect, not the best place for a toddler, but in our defense, we thought it would be more like the automotive museum and besides, she was sleeping when we started.

Heading back home, the rest of the family returned from the beach and we all decided a barbecue was in order (there had been a lot of hamburgers and hot dogs and buns purchased already). Matt fired up the grill and, like a master chef, had meat, cooked to perfection, coming off regularly.

Because I was trying to be good, I avoided the cheese, but I still had two burgers and a big stack of chips. I wanted to save room for the Baked Bear ice cream sandwiches we were planning to get later. Unfortunately, we never made it. The rest of the family was waiting for a friend of Faye’s to show up for a visit, so by the time they were all ready to go, it was too late for us. We did get to hear how good it was, though.