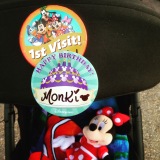 Finally it was here! One year since our little Monki joined us. It was her birthday and she… well, she couldn’t care less. Pretty sure she had no idea but that didn’t stop us from getting ready to celebrate it.

We made it to the park relatively early (jet lag was kicking in again) and Monki walked herself up to the castle gates. This was going to be a day of firsts for her… and we started with the

carousel. The wait time listed was 5 minutes so we figured she could handle that. Really, it was two rounds of ride before we got on. No problem. When it was our turn, though, Rasa decided that rather than set Monki on a horse, we’d take one of the bench seats. A little bit safer. There were only two of them, and they were both taken by the time we got there, so we politely asked if we could join the people already there. They nodded agreement. After all, there was room for 6 or 8 people on these things, so what was a few more. In fact, within moments, we were joined by another small family unit.

That was when the ride operator came by and said nope, only two people on the benches. What? Why? Didn’t matter, we were asked to move so now our choice was horse or get off. We chose horse and thus, Monki had her first carousel ride. Granted, mommy stood right next to her the entire time, holding on and making sure she didn’t fall off, but still, that was one for the books. 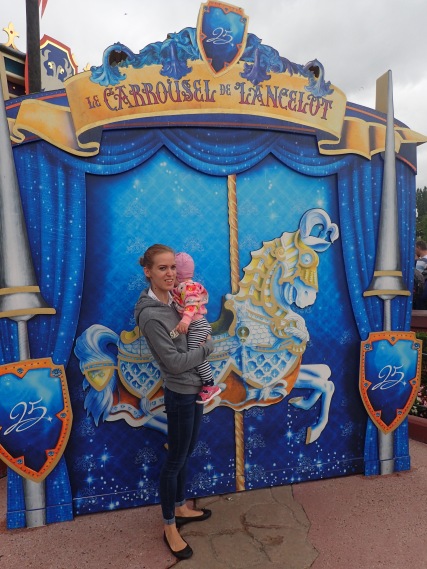 After that ride, a bit of a rest period was in order. Monki was getting tired and a nap for her would soon be required. We walked around and noticed a queue for the White Rabbit and those crazy twins, Tweedle-Dum and Tweedle-Dee. Perfect. I got in line while Rasa walked around with the stroller, and sure enough, Monki crashed out. She crashed out so hard, in fact, she slept right through her encounter with the denizens of Wonderland. Her loss (it’s okay, we got photographic evidence anyway). 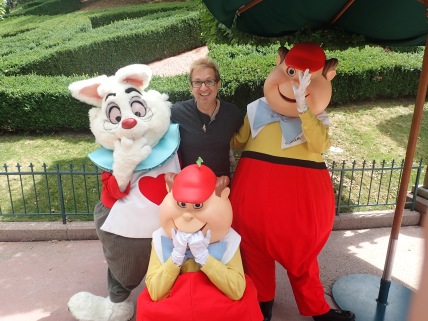 Hanging with my Wonderland homies

From there, we headed towards Frontierland. The one ride which hadn’t been open the last time we were there was Indiana Jones and the Temple of Peril. While I knew we weren’t going to be riding a lot of rides, this was one I wanted to hit. So we headed that way to check out the wait times. Turns out they weren’t too bad so again, I left Rasa to wander while I went to the ride (I ended up going on it twice over the course of our visit and honestly, while i’m glad I did, it’s a relatively short ride and not all that fun).

Naturally, I took the camera with me, and of course, while I was gone, Rasa and Monki had an encounter with Goofy, but that one will only live in their memories, I’m afraid. I only got to hear about it after that fact myself. From there, though, since we were close at hand, I went and got us fast passes for Big Thunder Mountain, a ride we had both enjoyed on our previous visit. Since we had time to wait until we could use that, though, it was more wandering and opportunities for picture taking. We even snuck in a lunch, ordering the 25th Anniversary burger. 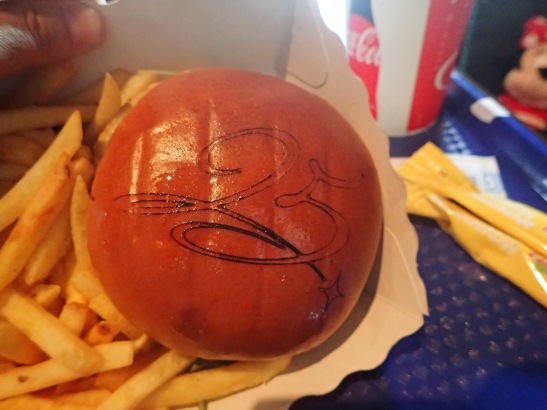 Good to be the king? 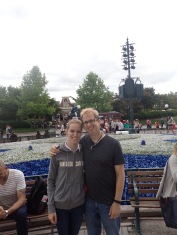 One of the only pictures of the two us this trip

The thing about the meals is we had gotten a “half board” plan with our package, which meant for each adult, you got a voucher for one lunch or dinner for each night of your stay. The thinking being that you’d buy yourselves lunch, presumably, since at an average price of €14 for a meal and the voucher being good for the €32 buffets it made the most sense. This way, Disney was still getting you for at least a meal a day. They didn’t count on us, though! With the way Rasa eats and me cutting my intake, my devious plan of sharing our meals actually worked out quite well. We would split the various burgers and fries and it actually filled us both up. Add in that you could get some complimentary food for the baby just by asking and we were in great shape, food wise.

So we had lunch and, since we were right there in Discoveryland, and we had the photopass, Rasa went to see her hero, Darth Vader. They had a wonderful chat, she learned about using The Force, and life was good.

By now, the sky was getting dark and menacing and while we tried a few more rides, nothing seemed to thrill Monki. Really, it was the waiting in line bit that got to her (like any of us, but we’re all old enough to understand the purpose of the wait, at one, she wasn’t so much into that. Eventually, though, we saw that the line for Dumbo wasn’t very long (and she had been 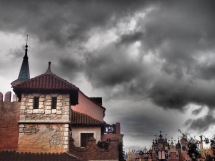 watching the elephants flying by every time we passed so we thought it might be a good fit). We had even tried Dumbo earlier, but the line got her and we had bailed. This time, though, things were looking up. Especially when another family got into line behind us.

They were from Romania and they had a little girl with them called Astrid (we think) who was also turning one that day. Monki had a birthday twin to play with. Watching the two of them together made the line go much more quickly for all involved and before we knew it, we were flying high (too high, at points, for Rasa, who is not so much a fan of the heights thing, but we found a nice, medium range and it was okay).

After that, our Fastpasses for Thunder Mountain had reached maturity (fruition? their time had come?) so off I went to ride. Rasa decided that even though she had enjoyed the ride last time, she didn’t particularly feel the need to enjoy it again so after riding it and meeting up with her and Monki, I still had a second Fastpass so off I went to ride again. May as well, right?

By now, it was getting late. We thought we’d find a spot and camp out for the evening’s light show, but after a little while it was obvious Monki wasn’t going to want to sit around for the few hours so we decided we’d try again later in the week and headed back to the room to sleep.