Friday morning we again made it to Disneyland and were all about meeting characters. Our first stop, just inside the gates, was Daisy Duck. Since it was early in the morning, Monki was asleep by the time we made it to the front of the line, but we’ll tell her she had a great time and all will be right in her world.

This was also when I tried out the Indiana Jones ride for the second time. Again, Rasa was waiting and by the time we met back up, she handed off Monki and ran off to the bathroom. As she went, we determined to go meet at Baloo, since Monki likes his video, too. Well, me and the little girl go and get in line. I have a hard time keeping her in one place, but I do okay and we’re moving up. When we’re about two spots away from the 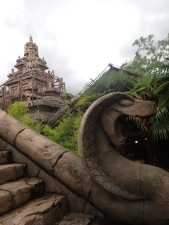 front, Baloo decides to take a break and Rasa still hasn’t shown up. Now I’m getting concerned. So I ditch the line, grab the baby and stroller and retrace our steps. I even go to the entrance of the bathroom I knew she was going to and yell “Rasa!” into the open door (raising some eyebrows as I try to explain to non-english speakers that my wife may or may not be inside and and I’m trying to find her).

Figuring that waiting where we said we’d be was the wisest course of action, we headed back towards Baloo… and sure enough, there was Rasa. She’d gotten lost but eventually found her back and we all got in line together. Good thing we didn’t miss this one, too, because I think of all the characters we saw, Baloo was Monki’s favorite. She loved him! She was waving and laughing and didn’t want to say good-bye.

Daddy gets a hug! 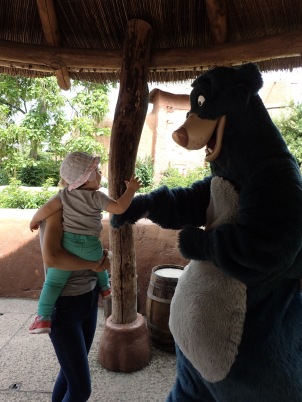 I went on one more ride, Star Tours, since I wanted to hear if C3PO did, in fact, speak french with a prissy British accent and you know what? He does. Seriously quite funny.

Before we headed back to the Studios side for dinner, we made a quick stop to meet Donald Duck. Monki was impressed. Not as much as Baloo, but still a good showing. Back at the Studio though, was Goofy, who ran a close second to Baloo. we had fun taking pictures with him out in the courtyard before heading into the park proper and getting some shots with Woody from Toy Story. 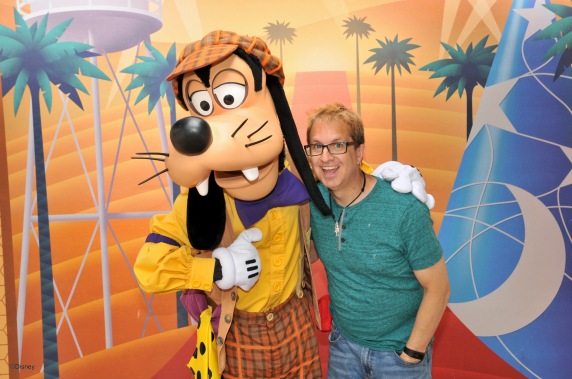 By now, it was getting closer to our time for dinner. I had time to go on Crush’s Coaster and confirm for Rasa that yes, indeed, it was a scary ride. Then she went on Ratatouille (which didn’t break, but her car did crash with another, which isn’t supposed to happen) before we went and picked up our reservation.

The restaurant is kind of funny. The premise is that once you step inside, you’re the size of a rat so the decor is all over-sized props. There’s huge strings of christmas lights as chandeliers and paper cocktail umbrellas covering some tables. The booths are delineated by plates backing them and the centerpiece is a copy of Gusteau’s book Anyone Can Cook. Even the lobby has artifacts from the movie and post movie life of the restaurant, including the critic’s response to the menu, which was performed so eloquently by Peter O’Toole in the film. 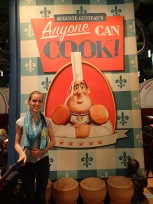 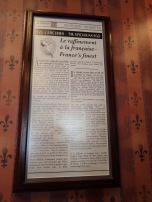 The food was good. I had a steak and Rasa had the fish. And of course, both dishes featured a delicious ratatouille. There was also dessert. I ordered the chocolate cake, which was fine, but Rasa’s chef’s special lemon cake was heavenly. By the time we finished though, Monki, who had slept through the meal, had woken up and wasn’t feeling well.

We went back to the hotel (it was our last night) where we discovered Monki was, in fact, running a fever. So while Rasa took care of her, and packed, I was sent to get her some food which we knew she’d eat – namely a chicken burger (we cut off the breading), a banana, and a Nutella crepe.

So back to the park I went. Back to good old Cafe Hyperion where, since it was Bastille Day, the crowds were outrageous and the lines incredibly long. I got my meal and headed to a street vendor where I stood in another long line for a Nutella crepe. With these in hand, it was getting dark and I was loathe to head across the park to Adventureland where I knew there to be a stand selling fresh fruit (I did not, however, have faith it would be open at this time of night). So without the banana, I headed back towards the hotel.

In order to get to our hotel, though, we had to walk through Disney Village, which is like a small version of Downtown Disney, with shops and restaurants. And a smoothie stand. which makes drinks with fresh fruit. And was willing to sell me a single banana for €2. But hey, if that’s what will make my baby feel better, then €2 for a banana is just fine. Hell, I would have gone as high as €2.50 if that’s what took.

I was the conquering hero returning home! I had huntered and gatherered what my family needed! And by the time I got back, we were mostly packed and ready for our last day, whatever it would bring.

Our last morning and Monki still wasn’t feeling well. We decided to forgo a visit to the park in favor of rest and getting to the airport early (who know what horrors might still await us there, right?). So with Rasa doing last minute checks, I head into Disney Village, final vouchers in hand (I must say I planned our voucher use quite well) I hit up the New York Deli for a pain au chocolat and orange juice for breakfast. Then, because I’m me, I went into the Disney store for some last minute souvenir hunting.

I’d discovered over the course of our time there that sometimes, you could find some great deals (one shop attendant explained January and July were the best months for clearance items). And sure enough, I found some good stuff. Some basic things but also some fun and funky items which Monki would get as presents as she got older. Including a Finding Dory hoody for €7. It was WAY too big for her, but I couldn’t resist the price.

So with food and treasures, I got back to the room, where everything was ready to go. We ate, checked out, and went outside to wait for the shuttle back to the airport. Poor Monki was not a happy camper at all, which was stressful for everyone, but we made it back to CdG with little issue.

Back at the airport, we were beginning to feel like natives. It didn’t seem so hard to find our way to the gate this time, even if we were several hours early. We found a lounge area to rest and eat lunch (the “nearby” McDonald’s, the only place to get anything outside of a pastry, was still a good long walk aways) and were third in line to check in.

Security was a breeze and we were sitting near the back of the plane where we had an empty seat in our row, which was nice. Monki was still not up to par and sitting on the plane, which is hot and stifling and not going anywhere, wasn’t helping. She started screaming (really, with all the travel she’d been through, this was the only time it got bad) but I got a glass of cold water and she put her hand in it and for some reason, that calmed her down. She ended up sleeping for 2 of the 2 1/2 hours back to Kaunas, which was great.

Landing in Kaunas was odd, though. Not the landing part, but where we went. Because Vilnius airport is undergoing some renovation, most (if not all) flights are being rerouted to Kaunas (which was good for us). But it was overtaxing the Kaunas system so we were shunted into a make-shift tent where our luggage was put on roller conveyer belts, pushed down by employees. Our stroller took a while to arrive, but eventually it, along with all our other bags, did.

Then I tried to find us a CityBee to get us home, but with the increased traffic at the airport, it appears there is a decrease in available cars since there were none available. Looked like we were going to have to cab it home. We found a guy who quoted us a reasonable price so we all climbed in and twenty minutes later, we were inside and dropping our bags.

Since we had cleaned out the fridge before we left (and Rasa’s food order wouldn’t be delivered until Sunday morning) I was back out the door and going to the only neighborhood supermarket open until 11 (it was just past 10) to get supplies for dinner and tomorrow’s breakfast before, finally, collapsing on our couch, Monki safely ensconced in her bed and us ready to look at pictures and talk about what an amazing and wonderful three weeks we had just had.