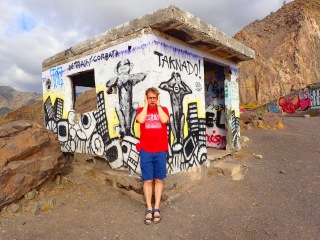 While the shows were the reason we were in Tenerife, part of the fun of traveling to these places is to actually see the sites. Our first two days were pretty much shot as far as that went, since we were putting in 15-18 hour days with only lunch breaks for getting out of the theatre (well… for me getting out of the theatre. The clowns had time while we were doing the lights and such to go back to the hotel and rest before show time). On our first show day, Zack and I hit Andrea’s, a pizza place a hop skip and a long jump away from the theatre. And their pizza selection was… interesting to say the least. I went seafood, ordering the San Francisco which was loaded down with shrimp, calamari, Krab, and mussels while Zack had the Florida, which was topped with banana and pineapple and several other odd taste combinations. 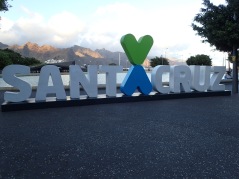 More so, though, we talked. Subjects would change at the drop of a hat, as one comment would lead to a side bar which would lead to another branch to the point that I’m sure there are some conversations we started which were never completed over the course of our several days together.

On Sunday, our first day off, while I would have liked to sleep late, that just doesn’t happen for me. It was nice to not have to jump out of bed first thing, so I could get up at a leisurely pace, even watch some TV and still make it down for breakfast around 9:30am, where I ran into Iryna and Dima. It turns out that Tenerife has a large Russian population (and in fact, the southern area of the island, where we performed our first show, is where most of them live) and while the clowns were doing some pre-show publicity, they made friends with another Iryna, a local Russian journalist who had interviewed them. So on this Sunday, Iryna was coming to pick up Iryna and Dimitri and take them off to hang with the Russian community. The same way I enjoy hanging out with native English speakers and fellow show people, they love hanging out with the Russians.

By the time I finished breakfast, I was heading out to the beach which Iryna had told me about. But when I went downstairs, the clowns still hadn’t been picked up. Journalist Iryna was on her way and walked in while I was standing there. A few minutes of conversation in Russian and Clown Iryna had arranged to ave me tag along for the beginning of their journey, which was a trip to a popular overlook after which, she would drop me at the beach I was heading towards anyway. Perfect.

The overlook was stunning and the spot of numerous publicity photos for the island. So we all git some good pictures and then I went to the beach. Clown Iryna pointed out where I should catch the bus to get back to town (this was several kilometers north of Santa Cruz). I joked i would probably walk since I needed to get my steps in (to be fair, running around the theatre setting up and tearing down a show provided quite a bit of exercise). And, in fact, I did just that. After spending a little bit of time at the beach, walking through the sand and wading in the water, I started walking back towards town. Now, before they had dropped me off, Journalist Iryna had warned me that the sun was tricky in Tenerife and I should get sunscreen. And I probably would have been fine had I actually taken the bus back, but no… I had to be clever and masochistic and walk the 8 kilometers in the noon sun. Sure enough, I caught a bit of a burn on my ankles and the back of my neck – But the walk was worth it. Saw things I wouldn’t have seen had I been in the bus, like a row of stone paintings of famous artists and thinkers and performers. Interestingly, after several hundred meters of male figures, there were two women to close out the installation. 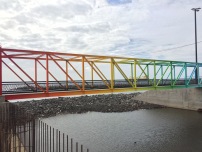 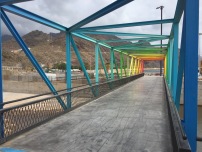 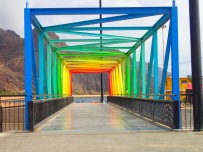 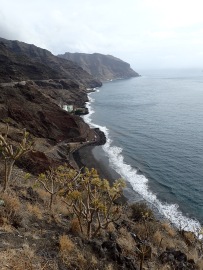 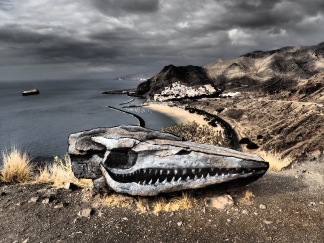 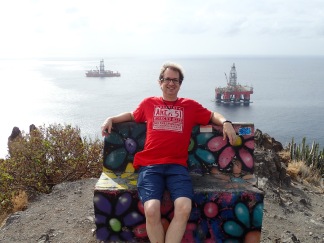 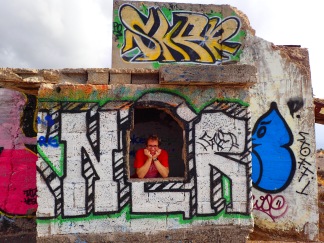 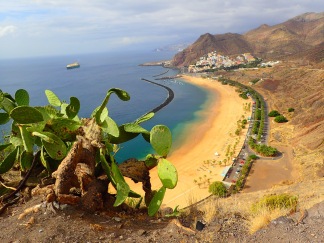 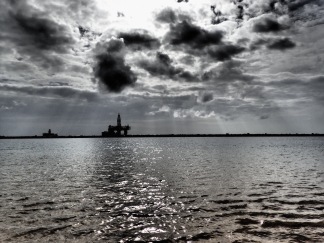 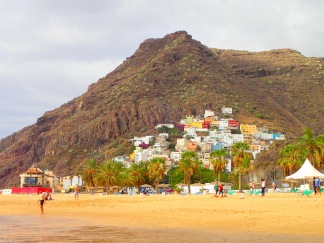 Back in town, I wsn’t sure what else I wanted to do. It was Sunday so things were closed and while I could have taken the hop on hop off bus or done something equally touristic, a part of me felt that if I did that, I would feel guilty because I wasn’t working. And I have quite a bit on my plate at the moment. So instead, I stopped, thinking to have a quick bite, and to check in with Zack. Turns out he was still at the hotel so we agreed to meet up. 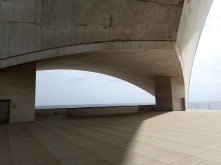 So much for getting any work done. We spent the rest of the day walking around town and talking, sharing stories and realizing we have similar senses of humor. For example, as we neared the water, he noticed a slight depression and wondered out loud “Do they have a dyke here?”

To which I replied “They prefer lesbian.”

“Well of course they do!” was his comeback.

So we explored the Auditorio de Tenerife, which looks like a diminutive version of the Opera House in Sydney and found a flea market which we took pictures of for Dima. As it got dark we found ourselves sitting at a bar across from our hotel, drinking and doing magic tricks – which continued through dinner and then at a table in the hotel lobby until after midnight. Incredibly fun and certainly what I

I had two of these!!

needed, but not really the smartest thing to do when we had another early call on Monday for our last show and load out.

After that was done, though, we were free to do whatever we wanted. The clowns were off again hanging out with the Russians so Zack came with me while I did some souvenir shopping. This was interesting for me, trying to figure out what to get Monki. She’s 15 1/2 months now and her personality is certainly developing which has led me to do all sorts of thinking. In the past year, when I’ve done Aga-Boom shows, I could get her stuff, but it didn’t seem as important as it would from now on, because now I’m starting to think about what she might want as opposed to what I want to get her, if that makes sense. I was in the shower and wondered if maybe she would want to collect hotel shampoo bottles from when I had to go away, or like Zack, who collects rocks from various places he’s been to remember the spots. Of course, the obvious response is to get her monkeys, and we have, but there again that’s us imposing our thoughts on her so that by the time she gets old enough to actually make a decision on her own, she’d be 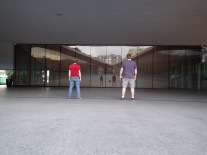 saddled with “well, I already have all these monkey things so I guess I like monkeys.” (Which isn’t to say you can’t get her monkeys, but it seems that as a parent, my responsibility should be a bit more focused on her, right?) All of which is to say it took me a little while to pick out something for her.

After our shopping, we didn’t know what we should do… then an idea struck. See, after

the show earlier that afternoon, we had ended up at the performer bar across from the theatre where we sat and wound down a little (Iryna and I had some sort of liqueur enhanced coffee which was delicious!) and we were joined by the two producers of the festival. And they had with them a huge grocery bag full of red clown noses. These noses had been on water bottles which had been given to the school kids who had come to the shows that morning and these were extras. Well…we’re all clowns so we grabbed a few and then tried to take a forced perspective picture of this sculptured face which was in front of the theatre. 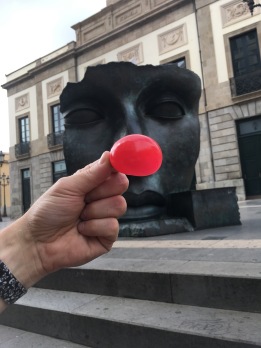 So now, there we were with a couple of plastic red noses and nothing to do… and we had seen a number of statues around town. And since Zack is an avid Pokemon Go player the stars aligned and we formed The Red Nose Bandits – our goal: to spread the red nose cheer! So for the rest of the afternoon, we literally just wandered allover town, putting red noses on as many statues as we could. Sometimes we probably were places we shouldn’t have been in order to pull off our little subversive acts, but that’s okay, sometimes you have to bend the rules for the greater good, right?

Of course, we balanced out any minor acts of civil disobedience by doing good deeds, like when we saw a car’s radiator blow in the middle of the street, effectively blocking an entire thoroughfare of traffic and we both jumped in to push the car out of the way without even waiting around for a thank you.

We made it an early night, though… well, earlier since it was still after 11 but at this point, anything before midnight was a win… as we both had 7am flights to get home.

All in all, really great trip. Hard work but also a lot of fun. Great conversation, good shows and some fabulous pictures. Next up is China in March. Looking forward to it.