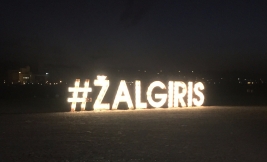 Sunday morning Feb 24, I got a message from a friend asking if we were doing anything that night. Seems he had some extra tickets to see the Harlem Globetrotters at Žalgiris Arena and would we like them. My first impulse was to decline. We had no one to watch Monki and I really didn’t want to go alone. But then Rasa and I talked about it and said “why not take her along?” So I accepted the tickets and we suddenly had plans for the evening.

So when the time came, we all piled into the new car and headed out to the arena. We had no idea what Monki would make of the whole thing, but figured we could try. If she didn’t like, we could always leave. Besides, Rasa was a big fan of Big Easy from his appearances on The Amazing Race (alongside partner Flight Time) and he was scheduled to be playing with the team, so that would be fun for her.

Getting into the arena was fine (they patted us down but didn’t check our bags) and we found our seats. The place wasn’t full, but there were still a number of people and we were just in time for the show to start. Within a few minutes, the team came out and the shenanigans started. As people were introduced, doing their signature moves, Monki was ecstatic, applauding and laughing and really seemed to be having a good time. She was alternating standing, sitting on mommy’s lap, sitting in her own chair and then doing the whole circuit again. And through it all, she had a huge grin on her face.

When the game started, she was right there with it. Well, mostly. Sometimes she was just as enthralled by the LED lights ringing the arena, but she clapped and yelled when the Globetrotters scored (or, really, when everyone else clapped and yelled). Big Easy was indeed with the team, in fact he was the main focus on the court, so that was pretty cool. And he’s a huge guy, but at one point he went to make fun of a kid sitting on the sidelines, and asked the kid to stand. The kid dwarfed Big Easy, who is listed at 6’9″. But then, this is Lithuania, home of the tallest Europeans and the place where basketball is as much a religion as anything else.

So we kept watching through the first quarter and at the break, out came the mascot, Big G, a guy in an inflatable suit. This may have been our undoing as Monki absolutely loved him and once he disappeared, her interest seemed to flag a bit. She was still half-heartedly paying attention, but she also kept asking when he was coming back.

Ultimately, just before the half-time mark, she decided she’d had enough, which was fair. It was about 7pm at this point, she’d made it through about 45 minutes of loud noises, far away action, and lots of people. For her first major outing like this, we thought she did quite well. So we took her across the street to the mall, treated her with some gelato and headed home.

It wasn’t until the next morning we realized how much she actually had been paying attention at the game, though. She has a small rainbow basketball she plays with from time to time. Well, this morning she pulled it and started yelling “Daddy, here!” and throwing the ball to me and catching it when I threw it back. Then she’d spin the ball and put it on her head, just like she’d seen them do the night before. She’d do her own versions of the tricks she had seen and throw the ball around.

So, either that’s her Lithuanian heritage shining through or she really did have a good time at the game. I know we did watching her. 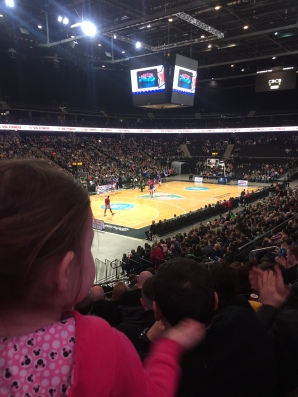