When deciding on our summer vacation, there are a lot of options to weigh. Granted,we’re only a small family of three, but you want to make sure there’s something for everyone. Last year, we went to London and learned some lessons about what to do and what not to do with a 2-year-old. We made changes on the fly.

This year, though, we decided again on Disneyland Paris.

Sure, we’d been there before, a couple years ago, also to celebrate birthdays, but now Monki was actually a bit more invested. She knew who the characters were and was more excited about going on rides and things.

But here’s the thing: As soon as you turn 3, the world changes. All of a sudden, all those toys which are not for 0-3 year-olds are open to you. You’re no longer a baby, you’re a child. And in the eyes of Disneyland, 3 is the age when you have to start paying for everything. So instead of going for our actual birthdays, which we were able to do previously, we had to go the week before. Thus, our “almost 3-year-old” was basically a tag-along on our adventures. This made it almost affordable.

With this all decided, logistics came into play. We booked our flights on Air Baltic since they fly direct to Charles de Gaulle Airport and we can take the “Magical Shuttle” from there directly to our onsite hotel (we go with a park property because they offer the extra time in the mornings as well as meal plans, which save us money). Also, with these cheap airlines, you have to pay extra for seat selection and while, if it were just the two of us, it wouldn’t be a problem were we to randomly sit separately, but knowing the computer software of the money making ventures, they’d have no problem separating an almost 3-year-old and wouldn’t that be fun to explain to the random people sitting next to her.

Also, since we now have a car, we pre-booked long-term parking a five minute walk from the terminal. The technology of these things is amazing – when your car pulls up, the camera reads the license plate and lets you in. This works for almost all paid parking in the country – where you can cover your expenses with an app tied to your plate number. Naturally, when we get to the airport, the gate takes a few minutes to recognize our plate and we have a moment of panic thinking we would have to make angry phone calls, but then it clicks, the gate opens, and we’re able to unload and head off on our adventures. 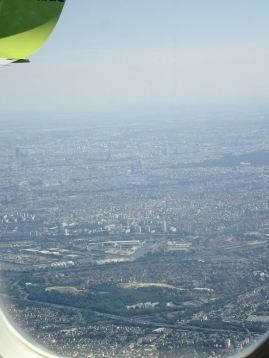 Seeing the Eiffel Tower from the plane!

The flight itself was fine, no issues with the exception of Rasa feeling a bit poorly prior to landing, but a little bag and some sips of water and all was right as rain. Plus, as de Gaulle is one of the largest airports in Europe, where the plane lands as opposed to where the gate is, takes a good twenty minutes of taxiing, so by the time we were off the plane, everyone was feeling good.

After quickly getting our one piece of checked luggage, it took a little while to find the shuttle bus (and only minor panicking on my part, not wanting to miss departure as the next one was an hour and a half later). I’d preprinted our tickets and had them folded in my pocket to refer to while we were looking for the bus, and by the time we actually found it, with a few minutes to spare, I’d managed to lose the tickets. Thankfully, the desk staff was able to reprint them so we were safely on board in time for departure.

Then things got a little complicated. We were leaving the airport at around 6pm on a Tuesday night so what should have been a 45-minute trip turned into an hour and a half of starts and stops in a very hot enclosed climate. Monki doesn’t handle this well and about 20 minutes before we arrive, gets violently sick. Two things happen at this point. 1) we learn about the amazing coalition of parents taking kids to Disneyland as several mothers offered everything from wetwipes (our own supply not being able to be replaced due to Brexit) and stolen airsick bags to replacement clothes should we need them. It was amazing. and 2) Our kid, having just lost her lunch everywhere, was not only embarrassed but kept apologizing for making a mess. In the end, we got her all cleaned up, into fresh clothes (we did have our own supply), and I’m pretty sure the driver rearranged the drop off sequence so we were first ones off the bus. 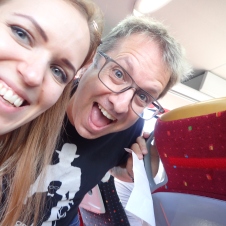 And of her own feet!

Check-in was fine, except this time around, they’ve upgraded the system so all of our

meals, park entry, reservations and everything else is on one RFID chip card, which is also our room key. It’s convenient, sure, but not as much fun as having a card with a picture of a Disney character on it.

Opening the door to our room, we get another surprise we weren’t expecting. Monki freaks out. I mean screams and won’t go past the doorway. We finally get her calmed down enough to figure out what the problem is: Seems that the “kwakawe” in our room (her word for any type of spinning fan) scares her. This is new, considering she loves pointing them out and seeing them elsewhere. Rasa comes up with the brilliant solution that I cover the ceiling fan with the bed runners. Amazingly, this works. It’s weird, because she knows the thing is still there, she sees it and over the next few days she’ll interact with it, saying hello and good bye, but she needs it to be covered (and later, not only was I given credit for making it disappear, but for eating it!). I do, however, let housekeeping know about it so they don’t remove it, which they are generally pretty good about. 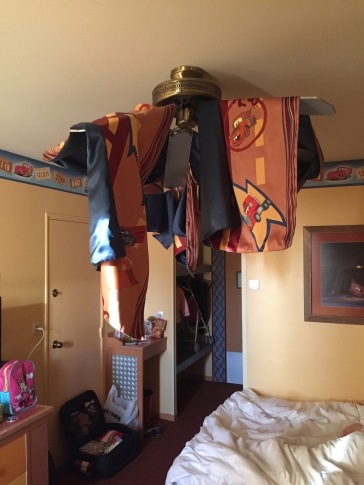 Finally, we get everything situated and decide to head out to the park. We haven’t eaten anything for a long while and it’s getting late, so we decide to stop at the McDonald’s in Disney Village for dinner. Rasa’s thinking is that once Monki sees things in the park proper, odds are she won’t eat. And when we got into the park, she was proven right.

By this point, it’s a bit late in the evening, close to 9, and there’s a very short queue for Snow White and the Seven Dwarves. We decide to give it a go. Things are little bumpy at

the start, the line itself freaks Monki out a little bit, but she sticks with it and we get on the mine car. Yes, we finish the ride, but she was terrified. Again a thing we learn: she’s not happy in the dark (we’ll test this theory a couple of times over the next few days, but it holds pretty well). The ride terrifies her.

To make it up, we head over to the Tea Cups. These, she loves! Sure, we all get a bit dizzy, but now she’s having a great time (despite being ill earlier). Coming off of that, she sees the facade for Small World and wants to try it. Previously, when she went on the ride in Anaheim, she was done half-way through. This time, though, not only did she love it, she wanted to go on it again immediately! I was so disappointed. Of course, as we do almost anything for our kids, since there was practically no line, we queued right back up and did it again. I’m gonna have that song stuck in my head for years now.

As we headed back towards the center of the park, people were filling every available space in preparation for the evening firework extravaganza Disney Illuminations which was scheduled to start at 11pm. We grabbed a spot and prepared to camp out to watch.

We didn’t make it.

It had been a long day and we were all ready to hit the sack under our covered ceiling fan.