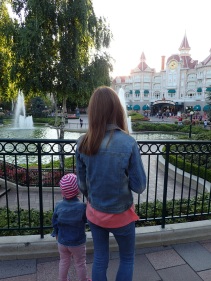 Friday morning and we were back to our usual breakfast at the hotel. This time, Goofy was in our lobby instead of Pluto, but Monki skipped pictures with him because she was, as Peppa would say, “quite hungry.” Yup, complete with British accent and everything.

After breakfast it was off to the park where the first thing we saw was Winnie the Pooh standing outside. This was the same place we had seen Donald on our last trip two years ago. So we kinda knew where to look for character meet-ups. We got in line but didn’t last long since even at a little after 10 in the morning, it was already boiling hot! Leaving Pooh to his own devices, we headed into Adventureland. Today, daddy was allowed to do big people rides so we wanted to swing by Big Thunder Mountain Railroad and get some fast passes. Since we had two tickets, I was able to get two passes so I could go twice, easily.

With those in hand, we headed off to see what else we should do, letting the whim of the day take us. As we turned a corner, Rasa said “isn’t that where we saw Baloo last time?” Sure enough, it was. And people were lining up so we decided to see what was going on. Turns out it was the place for the Moana meet and greet, scheduled to start in about 45 minutes. And at this point, we would be like 7th or 8th in line. But again…it’s hot and asking an almost 3 year old to sit in the sun was ridiculous so I volunteered to wait while they went off to do other things.

Now, when we had seen Baloo two years ago, a similar thing had happened, where I and Monki were waiting while Rasa had gone to the bathroom. Then she got lost coming back and we had a heck of a time finding each other (we did get the pictures, though, so it all worked out). This time, when they left, Rasa made sure she had the map with her. And since I knew I was going to be spending some time on my own today, I had packed my book. So I settled in to wait and read.

Knowing me, though, that didn’t happen. Had it been AAron, he would have finished half his book. Me? I got through about 5 pages before I started talking to the family in line behind me. They were quite nice, with three kids, two of them teenagers who were so bored it was actually funny. It helped pass the time and soon enough, Moana showed up. So did Rasa and Monki although I was getting nervous that Rasa would get lost again (and, truth be told, she did lose the map but found the place regardless).

Then they were gone.

I was two people away from the front when I looked over and the girls were missing. It was weird. They were there, sitting against the wall, and then they weren’t. The friendly family behind me was helping me look as I freaked out a little bit. Then their oldest daughter, who was about 16 or so, spotted them. Rasa had moved to the other side of the queue, which was more in the shade. Whew.

We went in and Monki met Moana. She definitely liked the costumed characters better than the “faces.” Even so, she liked Moana and still remembers the poses Moana told her to do for the pictures. 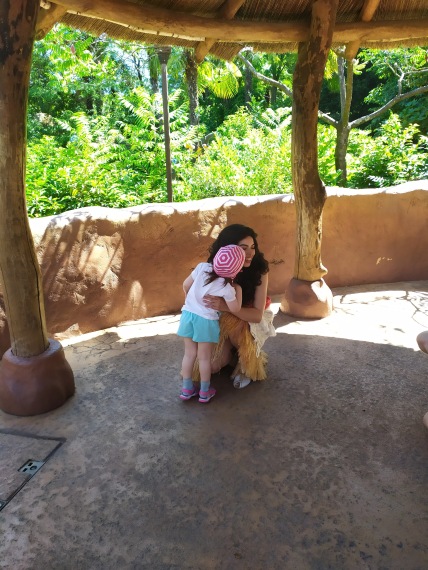 Saying good-bye to our new friends, we weren’t sure where to go next. It was almost time for my fast passes, but then, we found Baloo in a little side area with almost no one around. Right before it was our turn, though, Monki hurt her finger and suddenly didn’t want to see a 2 meter tall bear. But then Baloo heard that she hurt her finger and gave it a kiss better and soon enough, she was fine and we got some lovely pictures.

By this point, my fast passes were valid so I headed off to Thunder Mountain with plans to meet up at the pasta place which had been closed the night before.

Meanwhile, while I was riding the big people Thunder Mountain Train (twice! thanks to the two fast passes) Monki and Mommy headed back to the Casey, Jr. train so Monki could yell and scream while it raced around the track. Since they still had time after finishing once, they also went on the Tea Cups one more time. Monki still loved the train the best.

In fact, after lunch (the less said about that, the better), Monki wanted to ride the train again, this time with me. So off we went. The wait was a bit longer than they had experienced earlier and by the time we were done, the Tweedle twins were outside with a slight line so we joined it to get some pictures. Rasa had mentioned that this little strip

of real estate was full of characters and they had seen Donald and others when they were there before. Now, in addition to Tweedles Dee and Dum, there was also Pinocchio and Gepetto and one of the Mary Poppins Penguins. We skipped those last two since they had long lines, and actually ended up moving with the characters to another spot to finally get our shots, but it was still fun!

It was getting hot so we figured we’d go and do the Parachute Jump again and then maybe Rasa and Monki would head back to the room for a cooler nap. However, in order to get to the other park and the Jump, we needed to walk through most of FantasyLand and out through the castle. As we walked past the sword in the stone, I convinced Monki to do a “King Arthur,” pulling-the-sword picture but there was another family so we were waiting our turn. The two boys in that family kept leaving and coming back so we were having a bit of a time getting in there for our picture. Monki was waiting patiently inside the little stone circle, and I was on the outside, waiting to snap the shot. Then, just as we were about to go, some dad walked up with his kids, who ran in and started playing with the sword. I yelled at him for not waiting. Explained that there was a little girl who was waiting her turn and he should do the same. Yup. I shamed him so Monki could get her picture.

Of course, by the time we got the pictures we wanted, we couldn’t get out of the castle since there was now the Jungle Book Jive parade blocking our way. No problem! We stopped and Monki got on my shoulders to watch everyone dance and sing.

Once the parade was over we did make it across to the other park and the Parachute Jump. Again, Rasa waited in line with us but then, when it was time for her to leave, she decided she’d go on the ride, just for the breeze of going up and down. It was that hot! And since there was literally no line for Slinky Dog, we went on that again, too.

Then I came up with the suggestion that instead of going back to the hotel, Rasa and Monki should go wait in line to see Mickey again – it was an air conditioned room showing mickey cartoons and the line barely moved. Perfect.

But first, lets ride the Orbitron rockets! This one got a bit complicated as technically, we could all three get into one rocket, but then, when they asked if there were any parties of two, I figured Rasa and Monki could go by themselves so I moved us forward in line. Then Monki decided she wanted all of us to go. No problem, as I said, all three could fit. Except when we got in the rocket, three fitting comfortably was not going to happen, so in the end, Rasa got out and Monki and I went around and around and up and down.

We figured a quick stop at the ice cream place on the way to Mickey would be great, but our way was once again blocked by the soon to be parade, so we backtracked into the Videopolis, which was also air conditioned and showing cartoons. Again, perfect. I left them there and went to ride the Phantom Manor, Paris’ version of the Haunted Mansion.

It was interesting because now I was looking at it in terms of whether or not Monki would be scared and absolutely she would. This one is even more scary than the Anaheim version, with few of the humorous ghosts and creepy things. Still, glad that I had the chance to see it.

By the time I was done, the girls hadn’t moved so I went back to them, making a quick detour to see the dragon under the castle (one of my favorite animatronics ever! and which my sister has dubbed Nogard). By now it was getting a bit late so one more train ride, and since there was no line, a quick turn on the storybook boats and that was enough for the day. Well…after a repeat of last night’s fries and then pizza from New York Sandwiches and some souvenir shopping.

On the way back to the hotel, Monki was running ahead and stopping, running and stopping, like she had pretty much every time we took the little path to and from the hotel to the parks. I would usually run with her and ten she would stop and wave “hello mommy” to Rasa who was pushing the stroller behind us (just a short word about that stroller – It sucked! yes, it did it’s job, and helped out, but honestly, a real POS). Anyway, Monki was running (I taught her to say “on your left” as we passed people) and she trips, skinning her knee and bruising her forehead. Surprised, but grateful, it hadn’t happened sooner, when it did, with tears flowing, we immediately went back to mommy while she calms down. This injury slows her down…for about 5 minutes. Then she’s running again, all the while, explaining to me that she needs to not run fast because she hurt her knee. The resilient nature of kids, am I right?

We make it back without any further incident, and go through the ritual of making sure the ceiling fan is covered and the lights are on before Monki will enter. Then, for us adults, it’s packing and bed time, made all the worse because we got WAY too much sun!