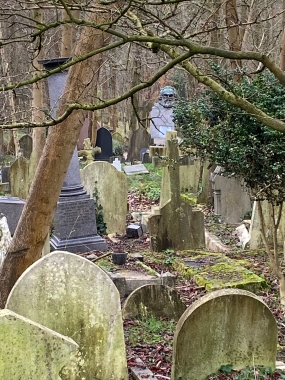 I get up early. Can’t help it. No matter when I go to bed, I still wake up early. Even if I go back to sleep, waking up early is a bane of my existence. In this case, it was fine, in that I was able to chat with Rasa and Monki before Lin woke up. But when that was over, it also meant I was up for a while until Lin woke up. So I watched some TV and read a bit. It wasn’t an issue, since we had planned for this, having booked the afternoon tour at the Highgate Cemetery.

The whole thing with the cemetery was it was something Lin had read about in the Time Out magazine guide to out of the box tourist ideas. She’d never been there before and I hadn’t, and evidently it’s where Karl Marx was buried, so okay then. As we were debating it, we learned there were two parts to the grounds and both had an entrance fee. The East Side was only £4 and was open to wandering. The West Side, however, was only available via guided tour, which was £12, and included entrance to the East Side as well.

After deliberation, we had gone ahead and booked the tour, not knowing anything about what we were going to see…especially since it seemed all the really cool kids (not only Marx, but writers Douglas Adams and Peter Shaffer (about more later), amongst others) were on the East Side. But hey, we had nothing else to do so why not check it out – especially since it was going to take a while to get all the way out to Highgate.

Walking the kilometer or so from the train station was a bit funny, though, as this was really the first time Lin and I had walked a straight distance together and it seems all my training paid off. A few hundred meters in, Lin looks at me and says “okay, we can slow down now.” So we did.

We made it up the cemetery and had some time to kill before the actual tour started, so 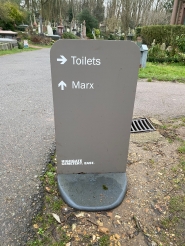 we meandered through the East Side, stopping to pay homage to Adams (one of my personal heroes) and see some of the lesser known names before heading back for the start of our tour.

The West Side is a bit fancier than the East. The East is just a large plot of land with lots of gravestones. The West, as we learned, was actually built to be a restful garden like spot, complete with an Egyptian themed area and some cool mausoleums and catacombs. Of course, that was a 100+ years ago and now, the whole place is overgrown and looks like a forest. It’s beautiful and feral. And, because of that, has been used as a set for a number of films, including Fantastic Beasts: The Crimes of Grindelwald and a number of the Hammer horrors from the 70s.

Liked by many – loved by all

As we started our tour, our guide, Peter, introduced himself as a former history teacher, having taught for 40 years, and loved being a guide at Highgate. He was fabulous. A natural storyteller who kept the dozen or so of us absolutely riveted. As we made our way through the sites, we learned all sorts of facts – there’s 50,000 gravesites but 170,000 bodies. George Michael is buried there, but not on the tour. One of the first stops on the tour, though, was Aleksander Litvinenko, the Russian spy who was poisoned in the early part of the century. One of the largest and most expensive tombs was built by a Jew in what was then an Anglican cemetery. The crowd to see off Tom Sayers, a bare-fist boxer, was larger by a geometric amount than the crowd to see of Marx. And others wonderful facts. Michael Faraday is there, as is George Eliot, Radclyffe Hall (who, if you don’t know, and I didn’t, is a must learn about!), and George Wombwell (another one I didn’t know but certainly seems like an interesting character to learn about). Honestly, it is well worth the trip. And of course, the day we were there, the sky was overcast and gloomy and it was the absolute perfect day to visit.

When the guided portion of the tour was over, Lin and I hopped back over the East Side to have another look around. It was then we actually took a look at Marx’s grave, which was interesting in that the artifacts and notes left behind were much more accusatory and demanding than the ones, say, left at the Bowie memorial. Also, since the place is

quite large, not all the pathways are paved. Now, for Lin, who was wearing her galoshes, walking through the thick mud wasn’t an issue and she plodded along gamely, trailblazing for us. Me, on the other hand, having only the one pair of shoes with me, had to be a bit more careful where I stepped – which meant having to go around the major mud bogs and the only solid ground nearby just happened to be the stones and marbles memorializing someone or other. But when it was that or sink, I did what needed to be done and did it quickly. Eventually, we made it back to a more solid pathway and didn’t stray again.

Before we left, though, we came across the gravesite of Peter Shaffer…except it wasn’t quite. No, the marked grave was that of Robert Leonard. At the bottom of his stone it says “By his side rests his ever grateful companion, the playwright Sir Peter Shaffer, CBE.” I mean, the man is an Academy Award winning author and this is what he gives himself (since his lover predeceased him by some 26 years). The humility is astounding.

After the cemetery, we wandered the nearby Holly Lodge Estates before heading back into the city. Lin had made us 5pm reservations at the Sky Garden.

Billed as “London’s Highest Public Garden” it certainly has the views to substantiate the claim. The whole of the floor is open, with gardens and restaurants and a bar or two, as well as an outdoor balcony, but ultimately, it’s possible to get a 360 degree view of London as you make your way around the area. And the best part? It’s free to go up and see it. You just need to make reservations in advance, but the elevator ride won’t cost you a thing. We went up and had a great time looking at the sites, taking pictures, standing where we weren’t supposed to stand – you know, the usual. 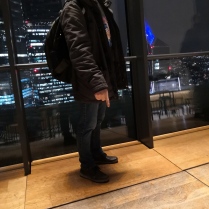 When we finally tore ourselves away, it was only because we had elsewhere to be. When I say Lin planned a great trip, I wasn’t kidding. And now it was time to head towards our next play and meet up with Lin’s friend, Athena.

Tonight’s play was Swive at the Sam Wanamaker Playhouse at The Globe. Interestingly,

Lin and Athena had already booked tickets to this before I had made my plans, but as soon as I knew my dates, turned out the seat next to theirs was still open so it was immediately booked and we were now an attending trio.

We got The Globe a little earlier than our proposed meeting time so we had a few minutes to wander the gift shop (always a dangerous thing and I left not unscathed) before walking across the way to meet up with Athena at a nearby Starbucks.

I’d never met Athena before, but I had met her best friend Kat a few years ago, on yet another quick trip to London for the culture. So I had introduced Lin to Kat, Kat introduced Athena to Lin and now Lin was introducing me to Athena. The circle was now complete (and we were actually scheduled to meet up with Kat a few days hence). We had a lovely chat (and I had a weird, but tasty, vegan chocolate

raspberry cake, with frosting in the shape of a nipple) before heading back to the playhouse.

I’d been to the Globe main stage several times in the past, both on tours and to see a show, but this was my first time in the Wanamaker. The playhouse was named for the actor Sam Wanamaker, who was instrumental in the reconstruction of The Globe itself and it’s designed to look like a Jacobean Theatre and based on plans by famed Elizabethan architect and designer Inigo Jones. The performing space is lit by candles and is quite intimate.

The play we were there to see, though, was not great. It had potential, certainly, and the space was really cool, but in the end, it just seemed that playwright Ella Hickson‘s reach exceeded her grasp. Lin, who sees a number of plays a year and reviews them on a scale of Goldblums, has a nice write up of it here.

After the show and a brief discussion of same, Athena, who wasn’t feeling 100% and had work the next day, took her leave and headed home. As for Lin and I, though, we had even more plans ahead of us.

As a day job, Lin works the Stage Door for the Lyceum Theatre, one of the most storied venues in the West End. It’s also home to the long running The Lion King. So before we headed home, we headed there for a backstage tour. It’d been a while since I was backstage at a working theatre (one with a current production, not one where I was organizing the production) and it was a nice and comfortable place to be.

It was also nice to meet some of Lin’s colleagues and see that not only was she respected, but she was also well liked. Special shout out to Max (who has the coolest job title ever – Customer Experience Manager), who told us some really cool ghost stories and legends and lore about the place (and I came up with some ideas for a future story or two). Eventually, though, we did have to head home, where another long evening of conversation had us not going to sleep until the small hours of morning.

Nothing like making new friends at #ccbaltics2022
#rednosebandits return!!
#monki is ready to cosplay at @ccbaltics this weekend! #captainamerica isn’t her only outfit, be on the lookout for #spiderman, #wonderwoman and #elsa as well!
#monki just gave me a drawn on tattoo. #pride #loveislove🌈
My walk home today. #thursday #avoidingtherain #kaunas
Not only does she cook, now she’s peeling the potatoes! #childlabor #kp #chefinthemaking
The hand that paints the eggs. #eggpainting #saturdayfun #monki
For the first time, chef #monki made the salad for dinner all by herself! Might go #vegetarian if this keeps up!
It’s about to get real! Starting the Sensawonder Project! (I bought a teleprompter!) #sensawonder #video #geek #geekculture