A favorite planet? Who has a favorite planet? Well, if you’re a science fiction geek like me, I suppose that’s a fair question. I mean even now, as I write this, I can look up at framed artwork of faux travel posters put out by NASA for various planets in our solar system and further out in the galaxy.

But this question asks about a favorite planet as a child and that requires a bit of thinking. Of course, the standard answer would consist of a 1 in 9* choice, right? Sure, we could get a bit more choice in there if we include the planet-like moons of the gas giants, which, if we were to colonize the outer reaches of our solar system, would be where we’d lay down roots. So now the obvious answer would be, say, a 1 out of 15 or so choice, yes?

Except now, when we factor in that whole science fiction geek thing, all of a sudden, the number of possible favorite planets shoots up exponentially. Because, in addition to all of the real, actual, verifiable planets, we have a plethora, a veritable cornucopia if you will, of options to choose from.

Still, we have to get to the “favorite” part of the question. How do you choose a favorite? In reality, Mars or Europa (a moon of Jupiter) would probably be on the top of my list since, at least hypothetically, we could get to them and hypothetically again, colonize and live on them in the relatively not so distant future, but then they would be favorites for more practical reasons, not just because I liked them. You know, like my favorite dinner meal would be something like steak, even though I’d rather have ice cream, but steak is a much more practical answer.

Just for now, though, let’s forego practical in exchange for planets I’d really like to visit.

When I was in 4th grade or so, I was convinced I was an alien from the planet Zaylon. No idea why or where that came from, but I certainly recall it as happening. I may have picked up the name from some SF movie or TV show but it struck me as a good idea to be from some other world.

So okay, then, let’s talk favorites. My first favorite planet would have to be Barsoom. Now, even though Barsoom is ostensibly Mars…it’s not really. Barsoom is a very different place than the red planet, one inhabited by 15 foot tall, 4 armed green men (complete with tusks) called Tharks and princesses who looked like regular humans. This was the world of John Carter, a Civil War veteran who became a warlord, and sired a line of just as badass descendants. 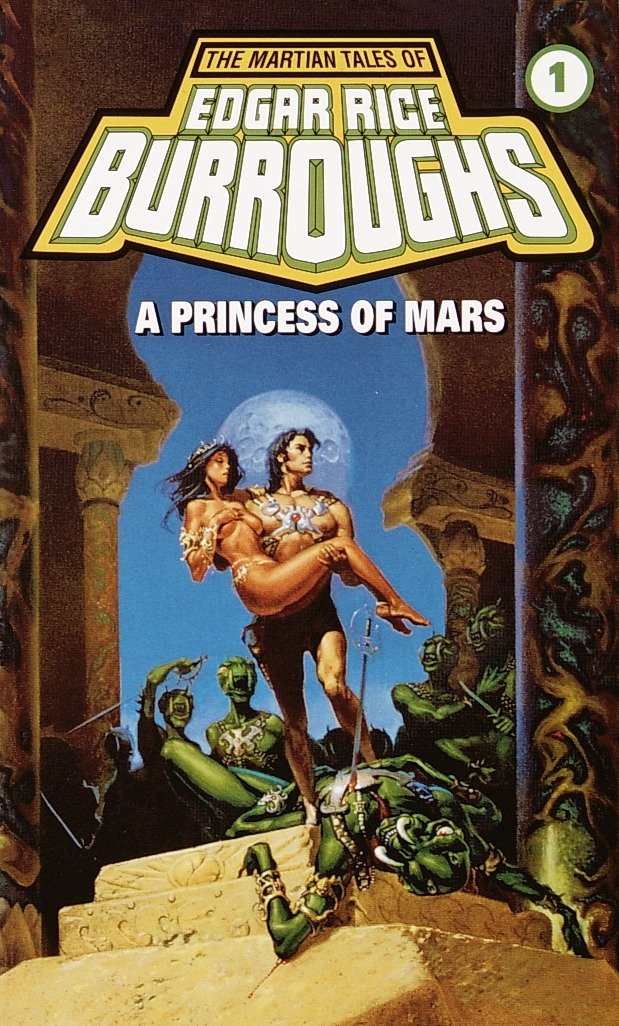 This was a world created by Edgar Rice Burroughs and I remember reading these books at about the same time I was thinking I should be from another planet. I was so enamored of Barsoom that when I read the fifth book, The Chessmen of Mars, in which Jetan, a version of Martian chess, was created and explained, I went to the local hobby shop and got the materials to build myself a set and taught myself to play. This was such a pivotal moment for me that I literally had a set of Jetan pieces created recently and just delivered so I could again play the game.

Around the same time, another planet which certainly piqued my interest but, unfortunately had been mostly** destroyed before I was born was Krypton. Krypton, home of Superman, was a planet orbiting a red sun and home to a race of scientifically advanced people. But, as I say, it was destroyed through internal volcanic pressure (or something). The thing about Krypton, though, was what it was like to be from there, not necessarily a place to visit. When I was a child, the idea of Superman’s home planet would make the list merely because it was where he was from.

As I got a bit older, my favorite planets, naturally, changed. I understand this question talks about when I was a “child” but if we can extend that nomenclature to mid-teens, I think there are a couple more planets worthy of mentioning.

The first is Pern, home of the dragon riders. The Pern books, written by Anne McCaffrey, start with Dragonflight 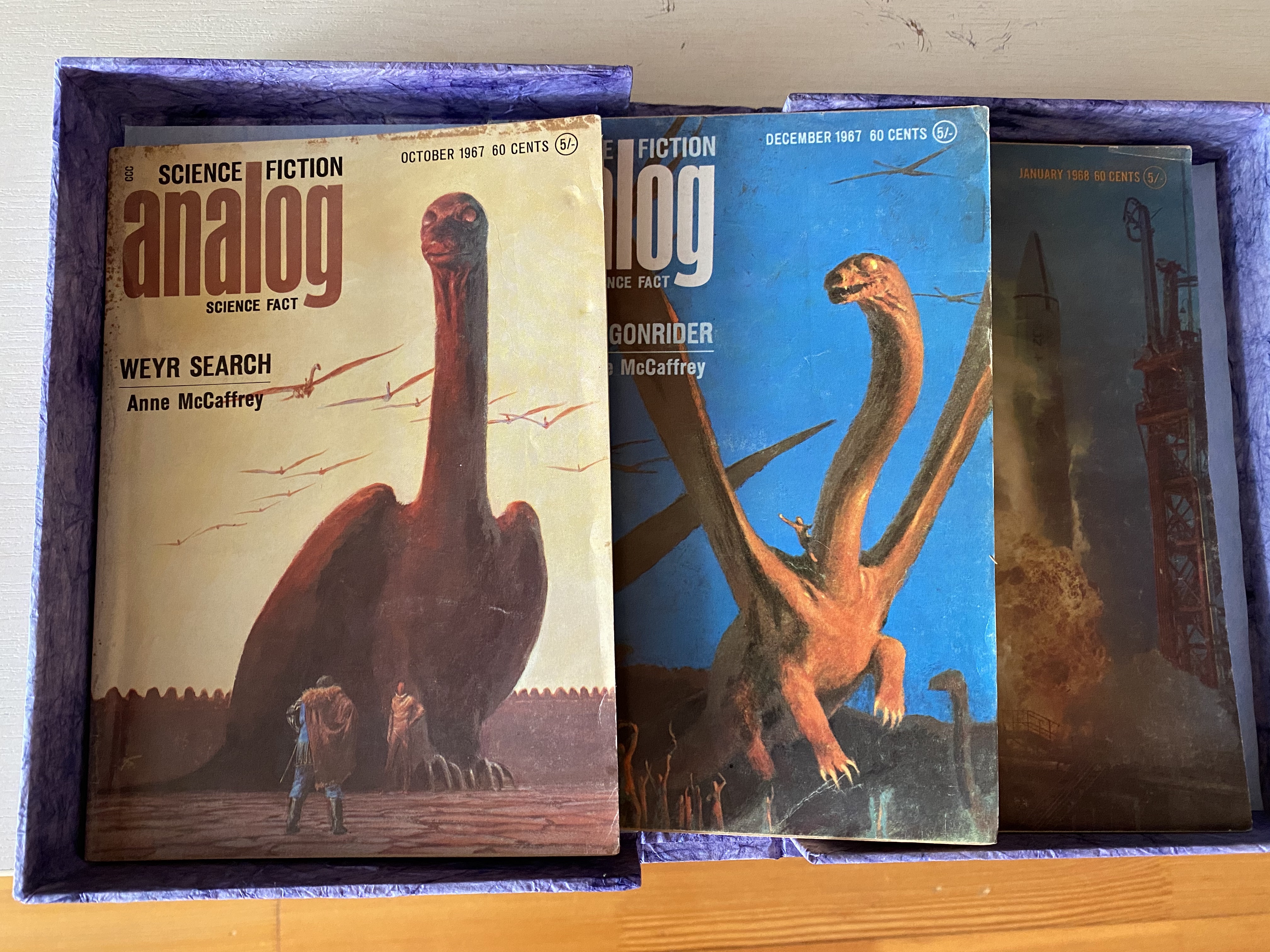 , introducing us to an amazing place where feudal-style communities are led by “Dragon Riders” who protect the rest of the population from “threads” which literally fall from the sky. When I was 12 or 13, Pern was one of my happy places. There weren’t as many books as there are now, but every time a new one came out, I ran to the store to get it. These were the books I asked for when I was sick and wanted a special treat from the store. And again, the impact they had on me was profound. When I started collecting books, getting the first editions of Dragonflight (both serialized in Analog and in paperback) was high on my priority list (I’ll get the first edition hardcover (1969) as soon as I can afford it).

Magrathea, the planet which makes other planets in The Hitchhikers Guide to the Galaxy, would probably be the last of the planets from my childhood that sparked a fascination and devotion.

With all that, though, I’d have to say my favorite planet, as a child and now, really, is Terra herself. But not the Earth

that I can see from my window, although don’t get me wrong, that’s a great place, too, but the one which captured my imagination and desire is the one where there’s a Wonderland at the bottom of a rabbit hole, where there’s a Mysterious Island for Captain Nemo to dock the Nautilus and where there’s a New York City that’s home to Spider-Man and the Fantastic Four.

So there ya go, some of my favorite planets from then and now. And I cannot wait to discover more of them as time goes on!

* When I was a child Pluto was still a planet, so there! Take that Dr. Tyson!

** I say “mostly” because it’s been brought back several times as well as having various pieces (including complete cities) saved, revived, found, or otherwise reconstituted over the years.