As with most of these “remember when” questions, what fascinated me as a child is a complicated query. Over the course of my childhood, which, for argument’s sake, let’s say extends from earliest memories (about age 4) up through getting my driver’s license on my sixteenth birthday, I’ve been fascinated by numerous things.

Thing is, though, I’m still fascinated by most of those same things. Even as a full-grown adult, my curiosity hasn’t come close to peaking, even if I don’t have the time or energy to research them the way I did when I was a kid.

But that’s the key, innit? We ask these questions about childhood because as we get older, most of us lose the…well, if not the ability to be curious, at least the wherewithal to do anything about it. Maybe that’s why the recent TV show Ted Lasso has made such an impact (on me as well as most of the TV watching public). The lead character, Ted, makes a point of being curious. It’s actually a pretty major plot point in one of the later episodes of the first season.

So, what fascinated me as a child? A lot of the same things which fascinate other kids. I loved dinosaurs, enough so that I remember making a dinosaur-themed game when I was about 5 or 6. As I recall, it was made from a folded piece of cardboard and poster paints. Have no idea how it was played at this far remove, but I do know my favorite dino was (and remains) the stegosaurus. There’s just something about the armor plating, tail spikes, and two brains, neither of which do much good.

I also liked movies and telling stories and listening to music and comic books and aliens and the Bermuda Triangle, but really, for me, I was just like a sponge. I loved learning new stuff. Honestly, that is what fascinated me. Just knowing there was more stuff to know excited me. Even today, I’ll tell my students that it’s okay not to know everything, there’s certainly too much to know it all, but to not want to find out, to me, that’s a moral crime. I had a student once tell me that I take stupidity personally. Can’t really argue with that. But it’s not even stupidity, it’s ignorance, it’s people who are comfortable exactly where they are and have no curiosity or fascination of their own

I mentioned before that when I was growing up, we had two sets of encyclopedias. They were on bookshelves in the family room, on either side of the fireplace. Amidst numerous other books, the brown Funk and Wagnalls (did we buy them one at a time at the local grocery store?) were on the left and the red Britannica Junior Encyclopedia set was on the right. When I was reading some work of literature or non-fiction (or even a comic book) and my brain snagged on a new piece of information, something I couldn’t parse by critical or contextual reading or that felt like it should be common knowledge based on how it was presented, I would put the text down and run into the family room to grab the appropriate volume of the encyclopedia off the shelf to look it up. And it wouldn’t just be from one set of encyclopedias. Oh no, not I. I would grab the corresponding volume from both sets and cross reference my research. Then, when I was satisfied with the answer, I would drop the books and head back to my room to continue reading. Then, about once a week or so, I’d get called into the family room to reshelve all of the books which were piling up on the floor*. 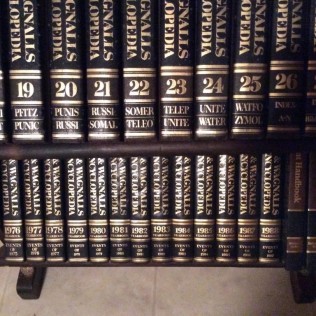 Beyond encyclopedias, this inclination to learn about things which fascinated me led to discovering all sorts of cool facts and interesting bits of trivia. And anything could set it off. If I was reading a comic book which mentioned monsters, I might be off on an exploration of folklore and fairytales. Watch Jaws and all of a sudden, I’m checking out every Jacques Cousteau book I can find in the library. Steve Martin sings about King Tut and I’m reading National Geographic to find out about curses and ancient Egypt.

To answer the question, then, what didn’t fascinate me as a child – besides broccoli…but even that has some interesting history, so really, it’s all good stuff.

* This would go for dictionaries and thesauruses, too.

Nothing like making new friends at #ccbaltics2022
#rednosebandits return!!
#monki is ready to cosplay at @ccbaltics this weekend! #captainamerica isn’t her only outfit, be on the lookout for #spiderman, #wonderwoman and #elsa as well!
#monki just gave me a drawn on tattoo. #pride #loveislove🌈
My walk home today. #thursday #avoidingtherain #kaunas
Not only does she cook, now she’s peeling the potatoes! #childlabor #kp #chefinthemaking
The hand that paints the eggs. #eggpainting #saturdayfun #monki
For the first time, chef #monki made the salad for dinner all by herself! Might go #vegetarian if this keeps up!
It’s about to get real! Starting the Sensawonder Project! (I bought a teleprompter!) #sensawonder #video #geek #geekculture