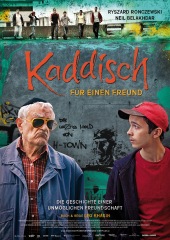 Saw an interesting film yesterday, Kaddisch für einen Freund, a german language film. Now, I was told before going there would be subtitle in English and Lithuanian so I wasn’t concerned. It was also cool because the screening, part of a German film festival, was being held in Romuva, Kaunas’ version of an art house cinema. I’d been there before, about a year and a half ago I was asked to be part of a steering committee to try and rejuvenate the place into a hipper, more popular venue. That plan eventually fell apart but I’d never gotten the chance to see a film there, so this was exciting. The film itself was interesting, being shown from house center from a laptop and a wall projector.

When the film started, the subtitles, which were only in Lithuanian, were being shown from a second projector down near the front of the house and I was left to enjoy a film in two languages, neither of which I could fully understood. Interestingly, though, I could get enough from the subtitles and German (and basic filmic structure) to pick up most of the story. From the name, I got an immediate sense of the gist of things. Kaddisch being the prayer for the dead and für einen Freund being easy enough to recognize as “for my friend.”

The film follows an Arabic family who have relocated to Germany after living in Haifa and who have very strong Palestinian/Anti-Israeli roots. Ali (Neil Belakhdar), the teenage eldest son of the family, is having a bit of a hard time settling in, preferring his own art to school or or work. It becomes painfully obvious close to the start that this art is not the preferred method of self-expression for Ali’s father and future tensions are faithfully telegraphed. Then, as the family moves into their new apartment, a leak from above sends Ali to talk to the new neighbor. A neighbor (Ryszard Ronczewski) who is older, who hadn’t realized his washing machine was leaking and who, much to Ali’s shock and horror, is Jewish. Our conflict is identified.

Eventually, in an effort to make friends, Ali and his only contemporary friend join up with a group of street thugs. These thugs convince Ali to break into the old Jew’s house where they can wreck havoc, which they do. Of course, as is bound to happen in this type of film, the old man comes home in the midst of the vandalism and the only person to be identified is Ali (who is nailed because he loses a show – the Cinderella motif is not lost) who, ironically was responsible for the most offensive piece of damage, a spray painted declaration of “Jews = Nazis.”

What follows is a bit melodramatic and standard. Ali’s mother makes Ali go and help clean up the man’s (whose name is Alexander) apartment and of course, he learns some life lessons and to value people as people. There were a couple of speeches which I didn’t quite follow which, I’m pretty sure, involved political discussions showing both sides of the Palestinian debate and that no matter how horrible the situation, it’s still not Nazi Germany, but as I said, that’s just speculation.

Towards the end of the film, Ali is up on terrorism charges, ostensibly stemming from his hate crimes and his primary defender is, you guessed it, Alex. Alex who promptly has a heart attack and end up in the hospital. Ali learns from this and finally takes a stand against the bullies, getting his former friend (who has been reluctantly hanging with the gang) stabbed in the side as a result. This causes a reconciliation between the two teenagers and leaves Ali to make one last visit to Alex in the hospital… where we learn Alex has died.

This film ends with Ali going to Alex’s funeral and he is given the honor of reciting the kaddish at the grave site, showing his full conversion to an open-mindedness we’ve been expecting since the first act. Even Ali’s father, who tries to be a good man, even as he denigrates his son’s artistic abilities, comes around and now understand he should at least tolerate the Jews, even if he does’t like or understand them.

Yeah, I didn’t understand more than a few words in a hundred, but the film offered absolutely no surprises so it was easy to enjoy. The performances were pleasing and at a running time of 90 minutes, nothing was wasted or too drawn out. If this shows up somewhere with English subtitles, I’d say give it a go. If not, it’s a bit like watching What’s Up, Tiger Lily? only not nearly as funny.