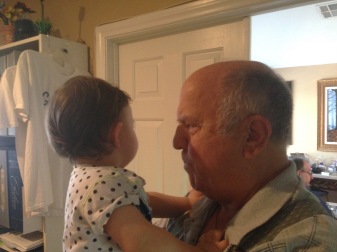 The next three days were a blur of seeing friends and doing things around the house with the parents.

Wednesday, I got up early to go shopping with dad. We hit several different stores, including Walmart. I ended up getting a few more things than I originally intended to and got gently ribbed for it. I can’t help it! There are a number of things I can’t get in Lithuania, especially at those prices. Like geeky t-shirts. The irony there, of course, is that I got two shirts, both size medium, and when I got home and tried them on, they were too big. So eventually I had to take them back and exchange them for smaller sizes, of which they only had one, so I didn’t get the shirt I really wanted, which is sad.

One of the other shopping adventures was a local grocery store, Smith’s, to get the fixins for Rasa to make her world famous salmon soup that night for dinner. It’s always impressive when you go up to the fish counter, ask for a specific weights worth of fish, and without anything, the person behind the counter comes within a few fractions of an ounce of your request. That’s called knowing your job!

I also spent lunchtime Wednesday with Max, the publisher of David magazine (of which I’ve recently also joined the editorial staff). It was a nice lunch, at a new location of a hip eatery called, unironically, Eat. There was also a good discussion which will hopefully go some ways towards streamlining the publication process.

The salmon soup dinner was a huge hit, as we knew it would be (mom had tasted it when she was visiting us in August, right after Monki was born). Rasa, who never, ever follows a recipe exactly, is a pretty amazing cook.

Thursday, a week before my birthday, is the birthday of my good friend Wade. Wade is an excellent writer, an award-winning game designer and, for one week a year, older than I am. I like to remind him of this fact on an annual basis. This year, though, since it was a big, ending in “0” birthday for us both, he sent me something really cool! We’d recently had a discussion about gaming and the old days of playing D&D together and I was lamenting not having anyone (or the time, really) to enjoy a game with. Being an RPG guru, Wade knew the fix and sent me a copy of Cthulhu Confidential, a game which only needs two people to play (and can be played via long distances!). Needless to say, I was very excited (but nearly so much as to actually see Wade in person a few days later, which hadn’t happened for several years.)

Leaving the house, we headed down to the Excalibur to pick up my friend Tom, who used to live in Vegas but was now based in Baltimore. Interestingly, when we both lived in town, he would go to Excalibur often to play poker (Tom’s a professional poker player as well as a great bar magician) and so when he told me where to pick him up, it was in the same old spot – and I, of course, had been away so long I got it wrong. I went to the wrong side of the hotel. Sure, I realized my mistake quickly, but it was still embarrassing.

Regardless, we found him eventually then we all headed out for breakfast and another nice catch up. Tom and I have a long history from after I moved back to Vegas so he wasted in no time in telling Rasa even more embarrassing stories than me going to the wrong place to pick him up. He’s also responsible for teaching me how to make one of my favorite dishes to cook – Crab Soup – going so far as to sending us a HUGE thing of Old Bay so we could get the seasoning right. After breakfast, we headed out to get Tom some casino playing cards for a magic trick (of which he kindly gave me a set so I can perform it here at home).

Leaving Tom to go back to the poker tables, our meeting of friends continued with a stop off to see Richard Faverty at Beckett Studios. Richard is a fabulous photographer and a good friend. When I lived in town, I would often help out around the studio whenever needed so there’s a file of weird test pictures of me in various poses with an odd assortment of props – again, many of these were shared with Rasa.

We also took a few family shots. This worked out better than the session on July 4th for us, since really, Monki was just wandering around the studio and Richard was snapping as he saw fit. No posing, really, and no trying to stay in one position for extended periods of time.

Our last stop before heading home that day was at Amber Unicorn, one of my favorite used bookstores on the planet, which is run by Myrna and Lou, who have known me longer than almost anyone I still keep in contact with who isn’t family. I always try and stop by to say hi when I’m in town and this was no exception, especially now with a (hopefully) future reader in tow. Unfortunately, by the time we made it to the shop, Monki was asleep so our visit took place out by the car so they could look in on the quiet little girl.

Of course, it’s near impossible for me to go into a bookstore, even going in just to see friends, without picking up something and this time was no different. Since Rasa had become such a huge fan of American Pancakes (or Appies as they’ll become known around our house) I got her a recipe book on how to make them. (yes, I know she won’t follow it, but at least it gives her a base from which to start)

I rounded out the night going to see Spider-Man: Homecoming with mom and dad and Uncle Brian. So good!

Friday started off lazily before we headed out to have lunch with Kim and two of her kids (Vic, her hubby, was at work and the other two kids were in Japan). Kim is amazing 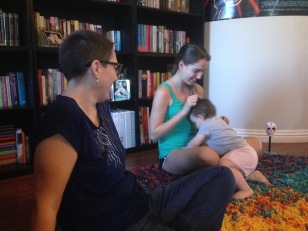 and one of my dearest friends. I could gush for pages about what she’s done for me, but I know and you’d be unbelieving one person could do all that. While there, Monki decided learning how to climb stairs would be a priority so she started figuring that out. We also had an amazing taco salad and spent several hours just kibitzing, several hours which went by way too quickly before we had to leave to get ready for the main even of the trip: Mom’s bat Mitzvah.

Before we talk about that, though, there is one more thing I should mention. See, I’d forgotten completely about Friday night services and even with Saturday morning, I had forgotten dress pants (mostly cause they didn’t fit). So on Friday night, about 90 minutes before services were due to start, I said to mom: “I don’t have pants.”

“If you have to wear jeans tonight, okay.”

“No. I don’t have pants for tomorrow.”

“Why didn’t you get some at Old Navy?”

“Completely forgot I needed them.”

So that was how I found myself at Old Navy at 6 on Friday night, buying slacks for both that evening and the next morning, dealing with a wonderful sales associate named Emma and somehow making people think I worked there.

We did make it to services on time, thankfully, and got to see and say hi to all the relatives and friends who had come to town to celebrate. For her part, mom did great! Even though this normally happens as a rite of passage when the young person is 12 or 13, when mom was that age, girls weren’t allowed to have bat mitzvahs and it was something she felt she needed to do. A few years ago, she had done a sort of “confirmation” thing but that didn’t include reading from the torah or chanting a haftorah portion in order to be a true bat mitzvah. That part, however, would take place on Saturday morning. Friday night, she and her 3 fellow celebrants led the normal services.