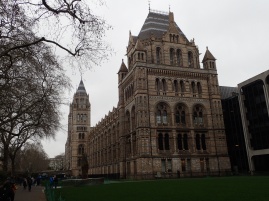 Monday morning started off too early for Lin. Naturally, the hazards of living with a small child and having to get up early on a daily basis means no matter what time I go to bed, I get up at what, for some people, is an unreasonable hour. But being the trooper (trouper?) she is, she was up before 9am and ran out to the local bakery to get some fresh bread then fixed us both some eggs (Gordon Ramsey recipe and it was skanu!) and toast for breakfast.

All the time we were just chatting away, discussing everything from life and love to politics and geek culture. Honestly, a great way to spend a restful vacation. Of course, since I can never just rest on vacation, we had plans for the day. Lin had never been to the Natural History Museum and since it’s one of my favorite places on earth (and the possible setting for a story idea I have) I thought we should go and check it out.

It’s weird that I like the place so much, though, considering that taxidermied animals give me the heebie jeebies like nothing else. The dinosaurs are amazing and several of the other collections are absolutely worth looking at. I can even tolerate the sea animals. But the fuzzy mammals are truly nightmare causing. Here in Kaunas we have a zoological museum, which is four floors of nothing but stuffed animals and I went once, when I first moved here, and never have the need to go again. You know how sometimes you take a really bad picture, and you’re frozen in that moment, looking stupid, forever? Nowadays, we’d delete the digital photo, or would throw away the print, but for these animals, they’re literally stuck like that for eternity. No matter how graceful or sleek they were in life, no matter how good the taxidermist was, for me, it still looks like a bad party pose. Creepy.

Anyway, Lin planned our route with the help of citymapper, which is a great app and one we used when we were in London last year. unfortunately, the directions it gave us to the Natural History Museum were slightly off. I know, having been there a few times, that the best and easiest tube stop is South Kensington. So when we got to the South Ken stop, I got up and ready to go. Lin stopped me, saying it was the next stop. Okay. She was the boss of directions. This had been determined since I kept asking questions about our routes and duration of travel and she kept telling me she had it all sorted and not to worry. Since I was on an R&R vacation, I consented and, like Elsa (or Cowboy Mouth), let it go.

The following stop let us out on the far side of the museum, so we ended up walking all the way along the front, getting some great views, and entered where we would have entered had we gotten off at South Ken, but that was fine. We weren’t on any particular schedule.

Inside the museum, it was delightful. Not very crowded at that point so we could take in the majesty of the building and the initial exhibits, including Hope, the blue whale skeleton hanging from the ceiling. Hope replaced Dippy, the Diplodocus skeleton which had been the centerpiece of the main (now Hintze) hall for a long time. 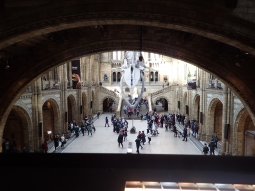 We saw a sign near the coral display announcing the meeting point for a “behind the scenes” tour and, after a brief discussion, to sign up for the next available start time. This left us a few hours to explore on our own, which we did in grand style! We looked at dinos and the huge blue whale (the one with skin) and even visited the insects and (quickly) walked through a hall of mammalian dioramas. We even had time for a leisurely snack break before the tour started.

The tour itself was of the “Spirit Collection,” named not for bottles of ancient alcohol, but instead for the hundreds of thousands of specimens preserved in liquid spirits (at least that’s my assumption). It was fascinating. We were taken into a few, employee only areas, but the highlight was one specific room which was the main reason for the tour itself.

See, back in 2004, the museum was offered a near complete specimen of a juvenile giant squid (Architeuthis dux) with the proviso that it be displayed. The problem was that at almost 9 meters long, in an acrylic tank filled with preservation fluid, it was too big and heavy (and possibly dangerous) to leave it out on the museum floor. Hence the tour, where the squid, nicknamed Archie, is on full display! In that same room, there was a cabinet featuring actual specimens collected by Charles Darwin onboard the Beagle. Such a cool connection to history.

I also learned something new, which is that a yellow topped specimen jar is the “Type” specimen. This means that this is the first identified example of the species. All others are based on this initial one which is the ideal version. I don’t know, but that seems like it would be a bucket-list item for a scientist or explorer.

After the tour, we were getting a bit tired and yet, there was still much to do! After hitting the gift shop (because I always have to get Monki something, right?) we headed back to the West End. Lin’s plan for the evening was to hit a Chinese place she loved and then we had tickets to see a show called “Shipwreck,” of which I knew nothing.

Living in a non-English speaking country, I miss bookstores (with a wide selection for me) a lot. I also miss comic book stores and geeky shops. Yeah, I know Vilnius has a few, but getting there is a bit difficult. And besides, London has Forbidden Planet, one of the largest and most well-known geek shops in the world! How much fun it was to wander the aisles and see merchandise related to all my favorite comic book and SF properties…and that was just on the ground floor! The basement, which was probably twice as large as the floor above, was filled with comics and books and I couldn’t help myself. I didn’t spend as much as I could have, certainly, but probably more than I should have. Totally worth it!

On our way to dinner, we also stopped at a few other themed shops, carrying an assortment of Harry Potter, Lord of the Rings and other large-scale fantasy world props and replicas. So much fun just to browse and see what’s out there in terms of merchandise and swag. The age of the geek is certainly here. Back in my day, when I was a kid, sure, we had comic book shops, but geek culture was so far from the mainstream, and even the big stuff was relegated to Star Wars or other TV/Movies. Comic books, novels, and role-playing games were the purview of the socially awkward, physically inept, and vision impaired. Now, it’s all mainstream and the original outcasts aren’t hip enough to like what we used to love.

Dinner was a little place in Chinatown called Cafe TPT. We ordered a pre-set meal and proceeded to eat our fill of so many good things, including sweet corn soup with crab, prawn crackers and a couple of traditional dishes which we split. After dinner, I asked the guy who seemed to be the boss what the TPT stood for. He explained it was Tai Pai Tong, basically a road-side food shack which you only went to for quick, good food, but was also often in danger of being shut down for a variety of reasons. Sounded great to me. I may not be too adventurous when it comes to food, but I am experimental as hell when it comes to locations. When I continued my conversation with the boss, asking him something about his Chinese background, he responded that while he was born there, he’d lived in London for so long he was “yellow on the outside white on the inside.”

Lin and I laughed appreciatively, paid our bill, and headed off to Islington to see Shipwreck at the Almeida Theatre. Now, as I said, I knew nothing about this show. The poster showed a black man in a contemplative pose within a silhouette of Donald Trump. Interesting. 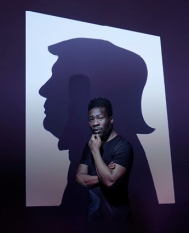 The play, it turns out, was a cutting edge, modern-day look at the effect of the Trump presidency (in particular, centering on the Comey hearings) on a group of liberal friends spending a weekend together in a vacation home in upstate New York. So a brand new play in a relatively new production.

That said, the staging and a number of the performances were good, but I didn’t particularly care for the show. It was divided into four basic components: The group of friends, an absurdist rendering of the Comey hearings/dinner with Trump; a farmer talking about adopting a black child in the late 60s and growing up with him; and the black child himself, relating his stories of growing up in a predominantly white neighborhood.

Of those the first was more a series of polemic speeches with no grounding in any sort of coherent story-telling. The second was, as I say, absurdist, and while timely, this portion of the play has no legs and will be unperformable once Trump leaves office. There are any number of plays which deal with topical subjects but do so in a universal way and so are able to be adapted and performed long after the events have left the popular zeitgeist. This is not one of those plays.

However, the third and fourth stories, were they further developed, could be. They speak to racism and the changing of what’s acceptable in a society and do it in a personal way, which can then be translated into the universal. That said, Fisayo Akinade, who plays the black guy (his name is Mark, but I only know that from the program, not from the text of the play itself) is amazing! I would see anything he’s in and if you’re in London, I recommend you do the same.

After the play, we stopped in at The Old Red Lion, an old time theatre pub in Islington, for a drink and a chat about the show…which continued, again touching on all sorts of subjects, certainly about the topics the show brought up, until we were home and said good-night.