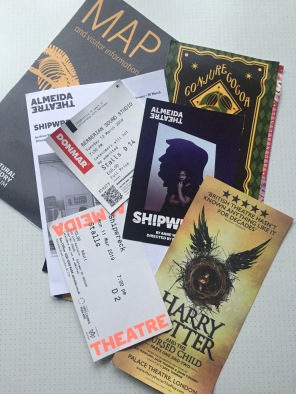 Tuesday was my last full day and I had only made one plan for the afternoon to meet a friend and Lin had tickets for me to see a show that night, so I figured this was a day on my own. I was up and out of the house before Lin knew I was gone.

I had arranged to meet my friend Ian near the South Kensington station so I headed that way. I found a place just outside the station called Muriel’s and treated myself to a “Little English” breakfast while I wrote out a few postcards and watched the rain fall outside. This is what my vacation was all about. I wasn’t rushing around to see stuff and take in all the sights and wonders of a new place, instead I was just relaxing, watching the world go by. It was wonderful.

But then I had to mail the postcards. There weren’t many of them, five in all, and there was a post office across the street, but when I got up to the window, I discovered why people email instead of write. It cost £1.25 per stamp to send a piece of paper out of the country. US or Lithuania didn’t matter. This was 2 1/2 times as much as the postcards themselves had cost. So much easier to just take a selfie, find some photo-embellishing app, and email it to friends and family. I know the tactile sense and excitement of getting something in the post box isn’t the same, but damn, that’s pricey.

Since I still had time to kill, I meandered through the V&A for a little bit, and even popped back over to the Natural History Museum for another look around (and I found a couple more things in the gift shop, too). Then, enjoying the relaxed pace, I headed back to where I was supposed to meet Ian (a Pret-a-Manger), but since it was insanely busy, I popped next door to the Starbucks and, drinking a coffee, read my book for a bit. Delightful.

The crowds at Pret hadn’t diminished by the time Ian arrived so we ended up at that same Starbucks where we chatted for close to three hours, but it felt like 10 minutes. I’ve known Ian for a dozen or more years and whenever I’m in London, I always try to see

him. He is one of most knowledgeable mentalists and mind-readers I know (and I know several) and has written some of the most definitive books on cold reading out there. And that’s not even getting into all the other stuff he knows and does. In just the last year, he’s figured out how to beat his sugar addiction, lost an amazing amount of weight (looks fantastic by the way) and joined the 100km running club. And yet, our 3 hours of conversation hardly touched on any of that. We talked about all sorts of other things, from life to love to work (and the fact that I was never able to write a cover story about him, yet, for any of the magazines I’ve worked for – I did, however, contribute to this one for him). Seriously an all around great guy and someone it’s just fun to talk with.

Before we knew it, Ian had to run off to his next appointment and I was to meet Lin back in Soho for dinner and our final show of the trip. We met up at Forbidden Planet since I could find it easily enough, bought a couple more things then headed out for dinner (Chipotle) and a return trip to Foyles to pick up that signed and numbered first edition of Black Leopard, Red Wolf by Marlon James then it was off to the Donmar to see Berberian Sound Studio.

When we got there, Lin picked up the ticket for me and left me to my own devices (she’d seen the show earlier, when she had been ushering there). Wow… this was an odd one. Based on the film of the same name, this was an experimental play, done in one, 90-minute act with no interval. I honestly don’t know what to make of it. I’d never even heard of the film and the plot of the play seemed a bit surreal and metaphoric to really follow once the action got going. It was certainly an interesting experiment, to see the live foley effects and the maddening toll the environment was taking on Gilderoy, the main character, but in the end, I’m not sure it was for me.

Of the shows I saw, none of them blew me away, but man, I was so excited to see live theatre I didn’t care. Sure, we could have gone for the safer bets of a West End musical (Waitress and Matilda are still high on my list), but seeing new, experimental theatre was more interesting, even if not as personally successful.

I met up with Lin again after Berberian Sound Studio let out and we made our way to The Phoenix Arts Club, which is the downstairs pub attached to The Phoenix Theatre,

where they are currently showing Come from Away, the musical about the planes landing in Newfoundland after the 9/11 attacks. The club, though, is a true theatre club. With signed West End posters on the walls, head shots above the bar and all sorts of entertainment. The reason we were popping by was that a group of musicians called The Islanders (made up of members of the Come From Away band) were playing traditional Irish folks songs.

It was wonderful. I only wish we could have stayed longer, but it was an hour to get home from there, and I would have to be up soon enough to get out the door and on my way back home.

Somehow, I managed to get everything I purchased into my backpack (including several books, a carton of hot chocolate and a mini london bus for Monki) and catch a few hours of sleep before my alarm went off at 3am.

Lin graciously got up with me and walked me down to the local bus which would take me on the half hour journey to Waterloo Station where I could catch the airport shuttle for the hour-long ride back to Stansted, where I would wait two hours for a two and a half hour flight back to Kaunas.

At the airport, I made it through visa check and security in no time so I had a while before my gate was even announced. Figuring that vacation was over, I found a place called Leon to have breakfast. So instead of a nice, greasy egg and sausage sandwich, which is what I really wanted, I had banana and cinnamon porridge. I almost had the avocado and halloumi cheese muffin, since Ian had actually recommended something similar the day before, but I’d eaten like crap for three days, so porridge it was. I didn’t 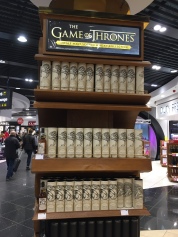 even get a bottle of Game of Thrones whiskey or a huge ass Toblerone from duty-free (to be fair, I’ve never gotten one, but they look SO good).

I was also able to grab a few minutes to read, charge my phone for the return flight, and just chill before they made the gate announcement. When they did, I, like everyone else, rushed to stand in line and wait for to get on the plane.

And we waited. And waited.

Boarding was delayed by 30+ minutes and again, I was seated next to a middle seat spreader.

In the end, though, it was three wonderful days, doing just what I needed to do to get my head at least a little bit back in the game. Thank you Lin and Ian for taking the time, and Thank you Rasa, for giving the time. Love you all.