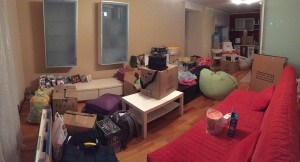 We’ve been looking for a new place to live for a while. Every day, Rasa would scour the listings, hoping to find something in our price range, in a decent neighborhood, and which fit our criteria of more room than we currently had. Then two weeks ago, she found something. We made an appointment to see the place on Friday at noon, discussed it for about 3 seconds, agreed to take it, signed the papers on Saturday and just like that, we had a new place to live.

Originally, they had offered us to move in on the first of May, but with the folks coming to visit starting on the 23rd, it made more sense to get it early so they could stay with us. This led to a massive effort of moving the following weekend – including help from Simas as well two students (Darko and Nazar) with the actual lifting of heavy things and Dove for watching and playing with Monki while Rasa packed everything – allowing us to be almost completely moved and unpacked in just three days.

The only major thing we needed to purchase for the new place was a bed, which we did easily enough, but because this was all happening on Easter weekend, delivery wouldn’t be until Wednesday, the day after the folks arrived. One night sleeping on an air mattress, not a big deal.

So Tuesday night came and I went off to Vilnius to pick up mom and dad, get the rental car and head back home. They definitely wanted to be there when Monki woke up in the morning. They were coming from spending a couple weeks with my cousin Mitch and his wife Wassana in Bangkok. Of course, their plane was delayed getting in to their one layover in Kiev, which meant they had to run for it. Turns out, that also meant their luggage didn’t arrive in Vilnius. No problem, we were assured the bags were on the way and would be delivered to our place the next afternoon. This meant everything was going to happen on Wednesday: Their luggage, our bed, and the transfer of Internet, which we’d been without since Saturday.

Then we went to find the rental car. It seems that despite getting directions from several people, no one bothered to mention that where they were pointing us seemed to be under construction. It never occurred to anyone to mention that where we were looking for was past the under construction place. Took us forever to find it and then there were some other issues but finally, we got the car and were on our way home.

We got in, got everyone situated and headed off to bed, with the admonition that we wanted cameras rolling when Monki woke up and saw Bubby and Pa for the first time in almost two years outside of a small iPhone screen. We were all a little nervous as to what was going to happen when the little one woke up. Would she freak out? Would she be shy and run and hide? Whatever we were expecting, the reality was a bit different.

When she did get up and walk out into the living room where Bubby and Pa were still in bed, she looked at them strangely then fell on the floor, pretending to be a worm or something. She was playing a game. Then, within about 30 seconds, she was up on the bed hugging and kissing them, as if they were old friends who had just parted the night before. It was a great relief to all concerned. 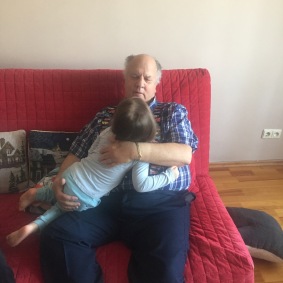 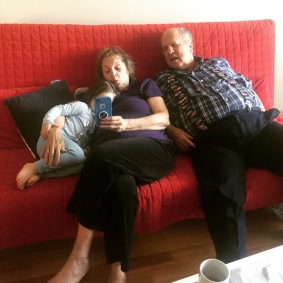 The rest of Wednesday was spent waiting for things to arrive and Monki getting to play with Bubby and Pa. Except then nothing arrived. Yes, the Internet guy came and did get that hooked up, but there were issues and complications and the quick process it should have been, became a lot more drawn out. Then the bed never got picked up by the delivery company so that wasn’t going to happen (maybe Thursday, maybe not) and the luggage did indeed arrive in Vilnius, but the driver wouldn’t come get it for delivery until Thursday morning and who knew when he would get around to delivering it to Kaunas.

So Dad and I hopped into the rental and back to Vilnius we went to get the bags. Thankfully, that went off seamlessly so we made it back in just a few hours but harrowing nonetheless. And when we did make it back, there was still the matter of re-inflating the air mattress, which had been put away in anticipation of the arrival of a real bed. These are the growing pains of a new place.

On Thursday, the bed did, in fact, get delivered. Well… as dad says, the wood for the bed got delivered. Also, you have to love a system where delivery ends at the building door, not the flat itself. So even though we paid for delivery, there was an extra charge to carry the boxes up the three flights to our apartment. Regardless, we now had the pieces of the bed and it was up to Dad and me to get it together. According to the plans, it should take two people a grand total of 40 minutes to accomplish this herculean feat.

Getting the bed frame together took a bit longer, mostly because we’d never done it before. This is like that movie Sully, where Tom Hanks’ character talks about how easy it is to make the right decision when you know what’s happening and you’ve done it a 1000 times before. But when it’s your first time, and you’re still reading the awkward pictograph instructions, it’s a different story altogether.

It was also an interesting Star Wars moment in that I was the one putting things together, the construction foreman, while dad was the helper. Ultimately, it took about an hour, using the Allen wrench (and if someone can explain to me why an Allen wrench is superior to a regular screwdriver or anything else for that matter? I’ve stripped so many Allen wrenches trying to put modular furniture together it’s crazy!), to get the frame together. The support slats, though, they were another matter.

The instructions called for 12 long screws to be inserted into 6 connection points, two each. After I got three in and literally broke the screw in half on the fourth, we decided to forgo the extra reinforcements and just hope the slats would do their job like a stone archway and let gravity lock them into place. So far, the bed is holding solid, complete with a 15kg Monki jump testing it.

Now, with most of the moving stuff out of the way, we could get on with the rest of the folks’ trip.