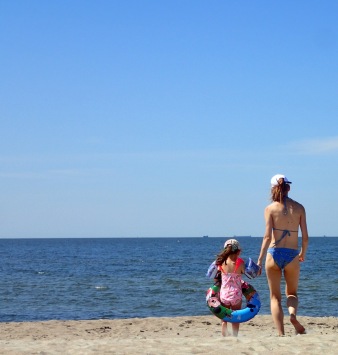 Having a car has meant that we have many more options available to us. For instance, when we were going to bed on Friday night, Rasa turns to me and says “let’s go to the beach tomorrow. We can get up early, load up the car, and head out to the coast.” Well okay then! Let’s do this thing!

And we did. Got up early (well, no earlier than we usually do), loaded up the car, made a stop for snacks and gas and away we went.

As we were “Schumachering” towards Klaipeda, I was working and Rasa asked if I knew “what that smoke was?” From where we were, it just looked like some bad exhaust, but then all the cars in front of us started slowing down. I could see the shoulder of the highway and there was a car stopped there, with people gathered around, so I just figured a car was overheating and no big deal.

As we got closer, the car I had seen was just one of several which had pulled over. Turns out there was a BMW on fire. Since all cars in Lithuania are required to carry fire extinguishers, a number of cars, including us, were stopping to try and put out the smoke billowing from under the hood. It didn’t take long to realize our actions weren’t helping much, and there were a lot of people there, so I got back in the car and told Rasa we could go. As we passed the disabled car, the smoke had evolved and the whole front of the car was in flames. Figured it made more sense to let others handle it (emergency services had already been called) and get out of the blast area in case the thing exploded.

With that excitement behind us, it was an easy ride to the beach…until we actually got off the highway. Seems that when Rasa had put “Klaipeda Beach” into the GPS, the location it grabbed was not the one we were seeking. Of course, we didn’t discover this until we started passing high, prison-like fences, topped with barbed wire, protecting huge oil refineries. Seems that the “Beach” the GPS though we wanted was a hotel right near the main industrial port of Lithuania. Not a big deal, except for the anxious 3-year-old in the back seat who was sure we were close to the water and was disappointed it was going to be another few minutes (at least it would be once we figured out where we were and how to get where we were supposed to be).

We finally discovered all the right locations and headed off in search of parking. Naturally, since it was a gorgeous day, the parking lot the GPS directed us to (the proper one this time) was full up. Rasa had noticed a few less crowded options about a kilometer back down the road so we went there, realizing there was a path to get us back this way. 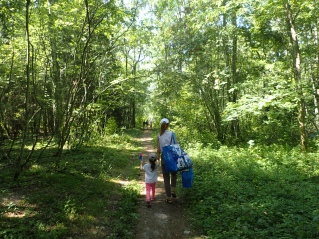 You know how this goes by now, right? Yup, we parked just fine, there were lots of spots (and in fact, the parking was ridiculously inexpensive) but as we were heading down the nice, paved pathway to get us to the beach area, Rasa notices a slightly trampled patch of grass in the forest which backs up to our parking area and says, calmly, while pointing into a copse of trees the Brothers Grimm would have been afraid of, “the ocean is this way.”

So away we went, forgoing the safe and easy path, and trudged through the forest towards what I assumed was the beach. At one point, Rasa suggested we take off our sandals. Okay. Until we started climbing a sand dune and the ground became unbearably hot. By this point, I was carrying Monki so she didn’t burn her feet (yes, it was that hot!) so Rasa had to help me put my sandals back on without dropping the little one. A couple of false paths and backtracks and sure enough, there was the beach and the water.

There were also only a few people around. Seems like we were smack dab in the middle of the two main beach going areas, so while there was lots of room to spread our blankets, there were no restrooms or food vendors. There was a changing stand, so at least we didn’t have to put on our swimming costumes (you can thank Peppa Pig for that bit of vocabulary nomenclature) under a towel. 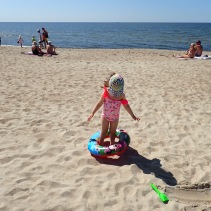 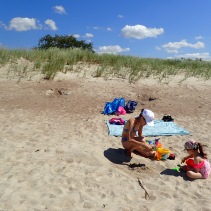 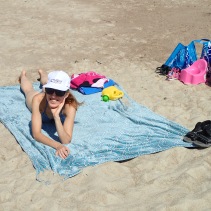 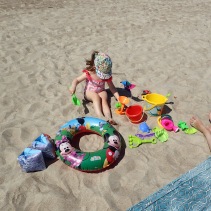 With swimwear activated, we were all set to hit the waves…except the water was really cold so it seemed that playing in the sand would be the order of the day. Which was just fine. Sure, before our time there was up I did get into the water and managed to get Monki in there with me to swim in the ocean. The irony, of course, is that even though I love the ocean, have been certified to scuba dive twice, once to the level of Advanced Open Water Diver, have actually managed a dive shop and kept my boss there out of jail, would have been a marine biologist or oceanographer in another life, despite all of that, I’m terrified of the water. Yup, fills me with terror and dread. Would much rather stay on the beach and read my book.

That’s not how life works, though, is it? Instead, Last week, for Monki’s third birthday, we 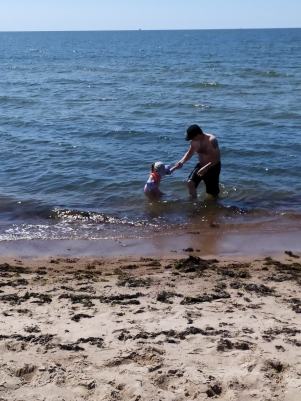 took her to the water park in Vilnius and I was the one holding her hand in the wave pool and here, in the ocean, where (as she very loudly pointed out) you couldn’t see your feet in 18 inches of water, here I was the one braving the cold and waves so she could “swim” in the ocean. Fair trade.

On dry land, though, she had also seen an episode of Peppa Pig where they buried Daddy Pig in the sand, so that became part of our agenda for the day. We started by burying Monki, but having daddy lie down and covering him with dirt was much more fun! So fun, in fact, we did it twice! Sure, we also did the usual beach stuff, flying a kite, kicking a ball, eating sand (that last one was only Monki, at least only her deliberately – not sure why, but that kid will eat anything except what’s put in front of her for dinner!). 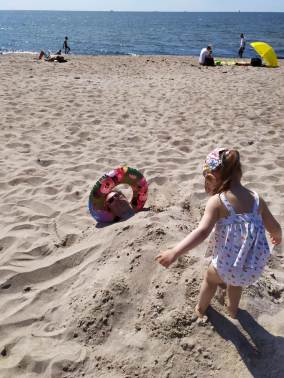 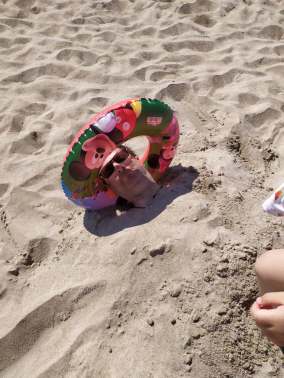 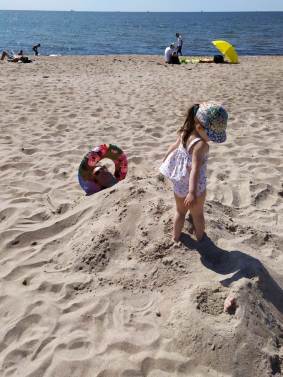 The ride home wasn’t nearly as eventful as the ride there (although we did just miss a road closing accident by probably minutes) and Monki was asleep pretty much before the car left the beach area. We all had a great time, and, it seemed, we brought enough of the beach back with us that Rasa had to vacuum three times to get it all.

We still have a few weeks of summer left, I wonder how many more times we’ll make this trip.