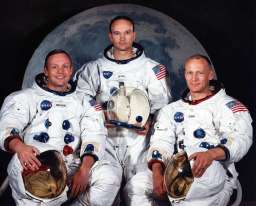 On July 20, 1969, Neil Armstrong became the first man to walk on the Moon—and Buzz Aldrin became the first one to pee on it. Read about that and 49 other tidbits in the Mental Floss article 50 Facts About the Apollo 11 Moon Landing for Its 50th Anniversary.

And for good measure: