Posted on February 3, 2020 by captainjaq

Monday was my last full day of this trip and there was still some shopping I wanted to do. To that end, I arranged to meet my friend Tim at Forbidden Planet, just in case there was something I wanted to get. Turns out there was. I ended up picking up a really cool Spider-Man journal for notes and writing and then, when Tim showed up, had a fun time showing him around the place.

Tim and I met in a high school creative writing class way back in ’84/’85 and hadn’t seen each other since. Interestingly, we both ended up as part-time writers and when we reconnected on Facebook a few years ago, he ended up publishing one of my short stories in Shroud, the magazine he was editing/publishing at the time. Since then, we’ve talked a bunch about various other writing projects and even tossed around the idea of doing our own publishing imprint for our books and maybe a magazine again. And since he had recently relocated to the UK (a short hop from London) it seemed like too good an opportunity to let pass.

Today, though, we were just catching up. We stopped in at a local BrewDog and had a few beers, along with some wings and chips, and just talked for a few hours. It was so nice to hang out again after so long, we made plans for Tim to come to Kaunas for a mini writing retreat where we could hang out and work on stuff. Really looking forward to that happening! I even did some magic (with a weird, half-size deck of travel cards) and was able to make some crazy literary reference jokes which no one in Lithuania would get, so that was doubly fun!

Leaving there, it was again raining as we made our way to Foyles. It had been our intention to hit the main drag of used and rare bookstores but the rain made that an unlikely possibility so Foyles it was. The main branch, on Charing Cross Rd, is massive. Several floors worth of books await any brave enough to wander up and down stairs and in and out of nooks and crannies.

Tim figured this was probably a good time for him to start heading home so after goodbyes, I went in search of one book in particular for which I had been on the lookout, Hidden Wyndham about the life of John Wyndham, a writer whose books I collect. Of course, with all those hundreds of thousands of books in that multi-story building, this is one they did not have. Ah well, no problem, they checked the computer and discovered that a nearby Waterstones did have it (Foyles and Waterstones are corporate siblings) and gave me direction to find the place.

Back I went, out into the rain and without an umbrella, in search of this book store. Yes, I found it eventually, but it is not in an easy to discover location, that’s for sure! Once found though, It was lovely. Just had a really comfortable vibe to it. I asked for where my book might be and then headed up to the second floor to find it. I was helped there by Jo, who was awesome. We started chatting about comic book/graphic novel non-fiction (there were a few books I was on the hunt for) and she was slightly embarrassed that they didn’t have many. So she asked me for some ideas and that sparked a whole ‘nother discussion. It was then I noticed the Bowie book.

I had seen the graphic novel biography of Ziggy Stardust at Forbidden Planet but it was a bit pricey for me. Even though it was one I had wanted ever since I’d first heard about it, I couldn’t really justify the price. It was the same price here, but when I lamented the cost, Jo decided that since I’d been helping her, the least she could do would be to give me a discount. Done and done! So now I had the two really cool books which I’d been hoping to get this trip! Score two for me!

With books in hand, I got in touch with Lin and discovered we had dinner plans to meet up with our mutual friend Kat at Balans Soho Society. Kat was another person I hadn’t actually seen in person for a number of years. We had met when I made a one-day solo trip to London back in March of 2016. Of course, we had certainly kept up on social media and, as I explained earlier in the travelogue, I had introduced her to Lin and they

had also become good friends. And later in the evening, Lin and I would be heading back to the theatre where I’d first met Kat so everything was again making circular motions. Always cool when the universe provides that kind of fun symmetry.

Anyway, Balans is a really cool place! When we got there, it was still early in the dinner rush scene so the place was not too crowded and we were not only able to chat amongst ourselves, but also with Theo, our server. Honestly, you have to love a place where the waiter flirts with everyone ate the table and we all flirt back! It 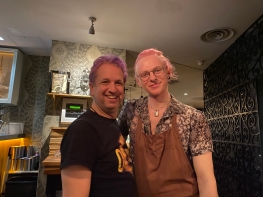 was the perfect spot for a last night meal (delicious, too). And then, just because it was a final night and because I was on vacation, I split a dessert of warm donuts in chocolate sauce with Kat. Yes, I paid the scale price upon my return home, but oh it was so worth it! And I got a membership card so next time I’m in London I will be returning and will try their world famous burger!

Dinner over, we said good night to Kat and walked the 3 kilometers to The Other Palace Theatre where we would be catching one of the final performances of the U.K. tour of Amelie in this venue. What a wonderful show, led by the amazing Audrey Brisson as Amelie. It perfectly captures the tone and whimsey of the film and the music is fabulous. I only wish there were an album of the London cast. 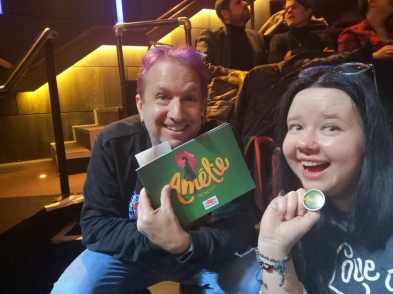 We thought about going to a cabaret show to cap off the evening, but in the end, it was starting too late for my old bones, especially when I knew I was going to have a long day of travel the next day. And by that point, we couldn’t even find a nearby bar to have a decent nightcap so we headed home to have a drink and I could pack up and get ready for the departure.