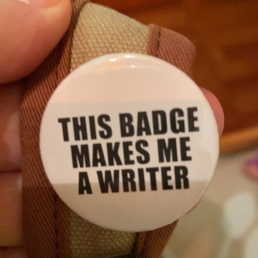 I knew I needed something to kick my brain into gear so I thought I would take a page from SFWA Grandmaster Ray Bradbury.

Bradbury, when he was starting out, sat down to write a short story a week. This seemed like a good idea to me, something to get me practicing a little more. As we all know, I need to figure out ways to get myself motivated and I figured I could sit down and, one day a week, write a story.

Now, the deal is that it doesn’t have to be good. All it has to be is complete – beginning, middle, and end. But here’s the thing: What I really didn’t want to do was have to come up with ideas every week. Not that I couldn’t, but the problem is that when I come up with ideas, I want to really work on them, to develop and give them the attention they deserve. Plus, I’m already working on a longer piece which is taking up a considerable amount of mental energy.

So no, what I wanted was just an excuse to get some practice in, stretch the muscles as it were. And that’s where Rory’s Story Cubes came in. These are sets of 3 or 9 six-sided dice organized into topics or genres. Each side has a graphic image on it which can be interpreted in hundreds of ways depending on context and your own proclivity. The original idea was as a game, where people got together, rolled the nine dice, putting them into whatever order they liked, and told a quick story. When I first saw these, some 7 or 8 years ago, I immediately picked up a set (I have a habit of collecting these kinds of story-prompt games – more on that in a minute). I’ve used them for creative writing classes and Monki loves playing with them. And over time, I’ve picked up not only the “classic” set, but the “voyages,” and “actions” as well. Then they came out with little 3 cube expansion sets and I picked up the “prehistoria,” “intergalactic,” and “clues” editions (which have all had name changes and been expanded into full 9 cubes sets).

I figured a short story, with all those possible permutations, would be too much. So instead, I randomly grabbed a third of each, giving me 12 dice (72 possible sides) and rolled away.

But I wasn’t done there. Recently, I backed poet Taylor Mali‘s (you know him from his viral poem “What Teacher’s Make“) Kickstarter campaign for a thing called Metaphor Dice (I actually backed the second iteration, the Erudition Edition, but got the first as well). The game with these dice is you get three words (Concept=Adjective+Object) and set them up to make a metaphor. Seems pretty simple, right? So since I have a total of 7 of each color, I grabbed two (again, about 33%), rolled, and added them to the mix as well.

Then I sat down to write. The result is here. I figured I’d create a new webspace for these endeavors while keeping this one for the more personal stuff. No idea how long doing these stories will last, but I’m going to attempt to keep at it for a little while. And if you want to know the roll which spawned that particular story, the dice picture is at the end.

I’m also going to add a few more randomly selected variables. I know for sure I’m going to roll for genre moving forward. And maybe for some specific character traits. Whatever. And the end result is I have complete freedom to write whatever I want…within limitations. Like a sonnet. I’ve got prompts which can set me off in weird directions and it’s all done with very little forethought.

And hey, if you want to join in the fun, I’ll post dice rolls over on Sensawonder.wordpress.com on Friday nights. Then you can write your own story!

One thought on “So I’m doing something a little crazy”