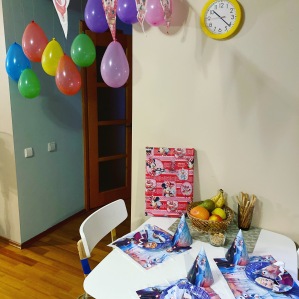 Well, this week, Monki and I turned a collective 57 (or, on average, 28 1/2 each). Personally, I think get the better side of that since in reality I’ve just turned 53 (Holy shit that’s a big number) and she’s just turned 4 (which, in its own way, is also a really big number).

For Monki, this was a pretty big deal. For the first time, she understood the concept of “birthday.” Of course, this didn’t stop her from asking, several times, “Why is it my birthday?” which led to all sorts of fun, if much simplified, discussions about her being born. But she knew her birthday was coming and that it was going to be a big celebration. We learned from last year and pre-ordered her cake – granted, we did it at the last possible (and still within regular, not rush service charge, fee zone – unlike last year) minute since she was waffling over what kind of design she wanted. Even after we decided Frozen would be best, she was still, on the day, guessing that the cake was going to have Darkwing Duck (which she has barely seen and only knows from the theme song and my t-shirt).

Since it was a big deal, we figured to do some special things. The first was to take her horseback riding. Rasa found a place not too far from us and we booked a ride. This was going to be interesting. Aside from Monki’s first time, for all intents and purposes this was Rasa’s first time as well, and me? well I hadn’t been on a horse in 15 years. The first question we were asked was whether Monki would want a pony of her own or would she ride with the guide (or us)? We asked her and she said she’d like to do it herself (of course she did, she’s 4!). When we got to the place though, the guide showed Monki the horse and again asked if she wasn’t afraid and ready to ride by herself. She firmly nodded her assent! Now, to be fair here, this wasn’t a kid-size pony they were about to put her on, but a full-size horse called Tequila! We popped her up on the saddle and warned her to hold on and she was good to go. Sure, the guide was holding the horse’s

lead, but Monki was all on her own. We brought up the rear on our own horses, and off we went for an hour long stroll through a village and a little forest.

For Monki, it was a most exciting day. After the guide’s horse pooped as we were starting out, all Monki wanted was for her horse to poop (which we’re pretty sure it did when we were in the forest – at least the guide told her it did and that’s enough for us). The little one loved it and immediately wanted to go back and do it again. This means that we have something else we can do, besides going to a pool or waterpark, which she likes. Rasa’s been really good this summer about finding us little excursions around the area, things we can do for “family days.” There’s lots of

nature walks, river and lake shores to explore, and there’s a growing list of things like zip lines and dinoparks to discover. All of which are great since the playplaces are now out of bounds due to the virus.

At the end of our ride, we had brought carrots for the horses (we had been told they liked them) and Monki had a great time trying to hang on to the vegetables while the horse, who was about 27x her size, wanted to take it away. in most cases, the horse won. 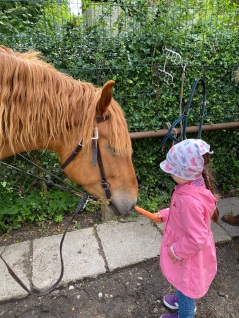 For Rasa and the horses, though, the next day she was in pain. All of her muscles were sore and she immediately understood why cowboys walk the way they do. But even so, she would also go back again. I have a feeling we’ll be riding more horses before the summer is out and we all have to go back to work. Plus, the stable gives you a loyalty discount so the more you go, the less expensive it is! Win win for everyone!

The rest of the week was pretty normal, with the one exception of Rasa’s friend Indre 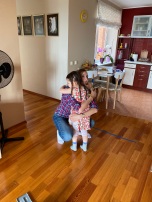 coming over a few days later to drop off presents and start the celebrations. Come Saturday night, though, Rasa and I were in full on party prep mode. When Monki fell asleep, we became little elves, blowing up balloons and wrapping presents for something akin to Christmas in July. The end result was that when she woke up on the morning of her day, the look on her face was priceless! There were balloons everywhere, the table was laid out with Frozen plates and napkins and hats (we had to have hats, she had insisted). And then, the coup de grâce, a wrapped gift on the table awaiting her discovery. Inside was an actual Elsa dress. Not the fake costume ones with a picture on the front so anyone can tell who you’re dressed up as. Nope, this was a real dress, just like Elsa wore in the movie.

After that, it was pretty much all icing on the cake (which still needed a couple of hours before we picked it up). We had a Facetime call with Bubby and Pa so Monki could open her present from them while they watched. As for the rest of her presents, we decided to

space them out over the day. No need to overwhelm her with everything. Instead, when she got something, she would play with it for a little while and then move on and the next one would appear. Until, towards the end of the day, our friend Dove and her boyfriend came by to close out the celebrations.

I’d say it was a success. So good, in fact, Monki didn’t want it to end. She had a hard time falling asleep since she wanted her birthday to continue. The only thing which gave us a little reprieve was that the next day was not only my birthday, which she could help celebrate, but her kindergarten would also have a little party for her, with songs and a present.

Sure enough, Monday morning came and Monki was excited to wish me su gimimo diena! Rasa, too, wished me a happy birthday and then promptly kicked me out! After we 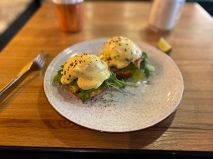 dropped Monki at school, I was left to my own devices for the morning while Rasa baked a cake and prepped for other things at home. So I took myself out for a delicious breakfast of Eggs Benedict and then to the coffee shop where I sat for several hours reading comic books and just enjoying the day! It was perfect.

So yeah, in the midst of worldwide pandemic and all sorts of other crises, we here, in our little corner of the world, were able to grab a little bit of sanity and celebrate a couple of people making it one more year around the sun.