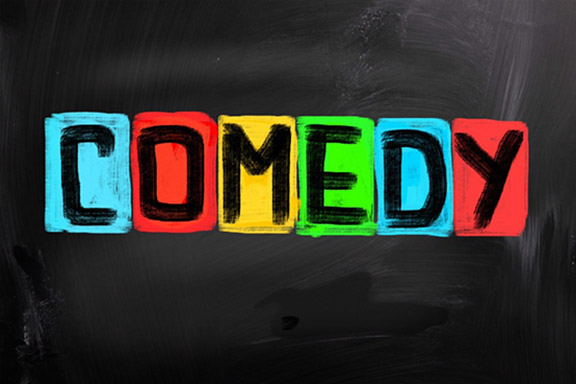 To be perfectly up front here, as I start writing the response to this week’s question, I can tell you the answer is “I don’t know.” In general, when someone says, “Tell me a joke,” I instantly freeze up and can’t think of a single thing. Which isn’t to say I don’t know any jokes, certainly, or have jokes I fall back on (which I’ll get to) but a favorite joke? I just don’t know.

Humor is a tricky business. I can remember learning joke rhythms from listening to old George Carlin records (specifically Take-Offs and Put-Ons and Class Clown) when I was maybe 9 or 10. Say what you will about letting a 10 year old listen to George Carlin records, but I think it certainly informed my own sensibilities. to this day, when I’m telling a story, my cadence and timing absolutely hearkens back to Carlin*.

Or Shelley Berman. If I wasn’t reciting Carlin’s “Al Sleet, the Hippy Dippy weatherman (with all the hippy dippy weather, man),” I was explaining the virtues of airline travel according to Berman. Inside Shelley Berman became a touchstone for me. Most people knew Carlin, but it became my self-appointed task to introduce them to Berman.

And, I suppose, these two comics were the beginning of my influence. What I mean by that is I was never a “joke” kind of guy. Both Carlin and Berman didn’t tell jokes, they told stories which were funny, and for me, at least to begin with, that made much more sense than the Henny Youngman style of one-liners. It was a more intelligent style of humor – even if I didn’t quite understand it all (It took me years to understand Carlin’s gag “Longshoreman walked off the piers today…rescue operations are continuing around the clock!”).

For me, it was this idea that the humor came from a place of knowledge and reference, not stupidity, that captured my imagination. Telling referential stories where the funny was related to something you already knew seemed a much easier way to go about getting laughs than writing a “set-up/punchline” scenario.

With that as a grounding, as I got older my humor evolved somewhat. Yes, I was and remain a huge fan of Robin Williams’ comedy (his first album Reality…What a Concept remains influential), but I appreciate his dramatic performances even more. I could never, really, ape Williams. His style was too much his own and so my own enjoyment of it was, and is, limited to sitting back and letting it wash over me. Not so with Steve Martin, who, in my mind, is linked with Williams since I discovered them both around the same time.

Martin, again, was a storyteller. Granted, he was a deconstructionist (and if you have a chance to read, or better yet, listen to, his autobiography Born Standing Up it’s a phenomenal work) but to this day, some 40 years past their release, I still find some of his routines slipping into daily conversation. Not the catch phrases, mind you, but the more esoteric bits (“getaway car…heh heh heh) are the ones which resonated for me.

Around this same time, Monty Python entered my world and I understood that comedy didn’t have to be straight forward but could be absurd and ridiculous and still be smart as hell. With Python, I was more into the movies than the show, although I did see various sketches here and there, it just wasn’t as readily available in the early 80s to a kid from Vegas. This was also the point where I discovered, via PBS (channel 10 in Vegas), British sitcoms and became that horrible snob who eschewed American shows in favor of BBC humour. Somewhere along the line there, I ran across Blackadder (season 2) and that was it, I was done. In a weird way, it reminded me of Andy Kaufman doing the theme to Mighty Mouse from an early episode of Saturday Night Live. Absurd in an extreme way, almost surreal even. Not a week goes by when I don’t answer a simple, binary question in Rowan Atkinson’s distinctive “yeesss…and no.”

By this point, I moved to Los Angeles and began working at The Groundlings, where there was every type of humor imaginable. Some people, like Greg Wall or Vic Wilson, were achingly smart in their sketches, sometimes to the point where the audience just didn’t get it, to Michael Hitchcock who would dance around the stage in his underwear and a troll mask. And everything in between. Spending time in the booth with directors like William (Bill) Schreiner or Tom Maxwell , who would take the time to have amazing discussions with me about the theory of comedy was invaluable.

Even so, the storytellers were, and still are, the ones which draw me. Eddie Izzard, for example I’ve seen live 3 different times (twice with my “sister from another mister” Dove) remains one of my top comedic draws (and once again, his memoir Believe Me: A Memoir of Love, Death and Jazz Chickens is well worth the price of admission, especially his own reading of the audio book). Regardless that it’s become almost a cliché, his “Cake or Death” (from Dress to Kill) is absolutely part of my idiomatic lexicon. When I tell stories myself, I try to find the humor in them, often adjusting and changing the delivery as I go. (Once, when I finished telling a story to AAron, he asked me how many times I had told it. “It just happened,” I said. “You’re the first person I’m telling. Why do you ask?” “Because you don’t have it down yet.”)

But when it comes to actual jokes? There are a few I like, some more esoteric (there’s a couple of knock-knock jokes I’m fond of – interrupting cow and control freak to be specific) and some more by way of parable – using jokes to illustrate a point.

And then there’s my proudest joke moment. Sure, when working with the amazing comedians at the Groundlings every now and again I might offer a suggestion or have a well-timed glass break sound effect ready to go, even telling stories and getting one of them to laugh was always a highlight. But the absolute humor high point for me was in the early 2000s. My ex-wife was friends with a number of stand-up comedians, many of whom I met and became friendly with. At some point, early in our relationship, she told me a joke, but she didn’t tell me which of her friends had written it. The reason for this was because the writer was the guy she had been living with when we met. It was a great joke and several years later, when I finally met the bloke, I told him I’d been using his joke.

He was dumbfounded. “Tell it to me.”

I did. And he laughed.

Turns out it was all in the delivery.

Maybe he should have spent more time listening to Carlin.

*growing up in Vegas and spending years in Los Angeles, both in and out of the entertainment industry, I was never very starstruck. That said, the one time I had the opportunity to say something to Carlin, when he was wondering through a bookstore I was working at, I couldn’t do it. Not even a “hi, I really appreciate your work.” Just stood there and watched him walk by. When he died, I was in a hostel in Munich and took myself out for a drink to toast his memory.

2 thoughts on “What Is Your Favorite Joke?”