A couple of years ago, I decided we needed a pet. Not just any pet mind you. Oh no, we needed a fish.

As I’ve mentioned many times before on here, I got a dog, Laika, back in 2009, about 4 months before I accepted a job to move to Hungary to teach English in a small farming village called Mezőtúr. Laika left us back in 2016 and while I would love to get another dog, that’s just not in the cards at the moment. Neither is a cat, for similar reasons.

But a fish, that was something altogether different. Plus, I had an ulterior motive. Back around New Year of 2019, Rasa was struggling with some stuff, so I suggested we get a betta fish as a sort of meditation/relaxation therapy animal. It took a few weeks to convince her but around the middle of January, she relented, and I picked up a small bowl and a nice blue betta she named Mr. Grumpy*.

As is the way with these things, it didn’t take long before the single betta was joined by a couple of other fish and transplanted into a bigger tank. We even tried getting a filter but that didn’t quite work out. Neither did many of the other fish. But Grumpy held on for a while, moving with us to our new place and enjoying his new surroundings…until he wasn’t.

He was a fish. It happens. 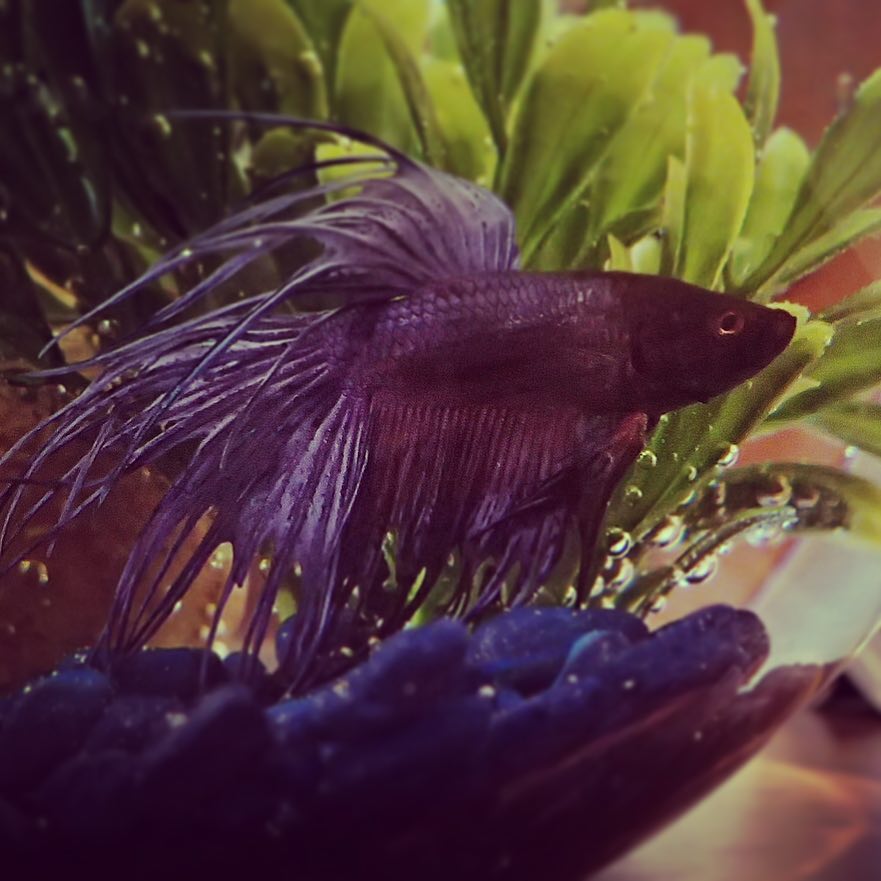 Then back in January of 2020, in the before times when you could still travel, while I was in London seeing plays, Rasa drove with Monki to Mega, one of the big malls in town, and the only one with a pet store which actually sold pets. I’m sure they were just going so Monki could ride the train. But they wandered into the pet shop, presumably to look at the cats (one of Monki’s favorite things) and walked out with a fantail goldfish, which was immediately named “Goldie.”

And Goldie is the reason for my writing today. See, Rasa has a weird relationship with pets. I think if she wasn’t a kick-ass researcher, she’d love being an animal trainer. When she and I first moved in together, Laika had a habit of sleeping on the bed with me. I was cool with it, it wasn’t a problem as far as I was concerned. Not for Rasa, though. Nope, she had that little dog trained pretty quickly to stay off the bed.

She would regale me with stories of her childhood and the various animals she would bend to her will. The dogs and chickens and geese who were her companions while she was growing up and would treat her with kindness and respect while taking bites and pulling down pants of any who would interfere.

With all this in mind, and with a new goldfish in the tank, Rasa decided that Goldie needed to be trained. No mere goldfish was he. If he was going to be a family pet, then he would do more than just swim around. So she set out to train him…and train him she did. She got him to the point where he would take food directly from her fingers and swim around to follow her when she walked by the tank.

In fact, he now wanted to be part of the family. So much so that whenever we would sit to watch TV, Goldie would swim to the front of the tank and try to get Rasa’s attention. He would swim up to the surface and literally make waves while we were eating to try and show he was hungry, too. He started doing tricks, like swimming upside down and backwards, all in attempt to get Rasa’s attention. Sometimes it would work and sometimes it wouldn’t, but he never stopped trying.

Then it happened. He finally hit upon the surefire way to get Rasa to notice him. He started spitting.

He would swim around and back himself into a corner of the tank, dorsal fin into the angle and head up at the surface and start throwing water out, causing it to splash in large puddles around the tank, sometimes reaching as far as the floor.

Now, if you know anything about Rasa, you know she likes to keep her little corner of the world quite neat and tidy. She also likes to keep my corner and Monki’s corner neat and tidy, too. Pretty much, she does not abide by messiness. I mean, we have a 4-and-a-half-year-old who puts all of her toys away. Every. Single. Night. The woman does not mess around (no pun intended). So when this fish decided that the best way to get through to her was to make a mess on the floor, he basically declared war.

For the past few months, we’ve had a running battle happening. Rasa cleans Goldie’s tank regularly and feeds him, often and by hand. She’s gotten to the point where he’ll come to the surface for her to pet him…but still, there are constantly puddles around the tank.

Personally, I think he not only likes doing it, I think he likes the attention it brings him. I’ve had a long-standing theory, that the more you get a reaction from someone for doing something, the more you’re going to do it. I will constantly tease Monki by saying “storm cows” instead of “storm clouds,” mostly because it drives her nuts. It’s a bit of harmless teasing and I stop if she gets too upset, but I think Goldie is doing the same thing. I think he knows it drives Rasa nuts and does it just for the reaction.

Currently, we’re debating getting a bigger tank, complete with filter, heater and, most importantly, a lid with a light. I think the fish might be winning.

I’m not sure if my original idea, to get a nice, relaxing fish, succeeded. But I do think that Rasa enjoys the hell out of having Goldie, even if he does annoy the hell out of her, and that’s worth a whole lot of something!

*Mr. Grumpy was such a hit among friends that the following Christmas we ended up getting a betta and all the accoutrements for one of Rasa’s best friends.

One thought on “Goldie”