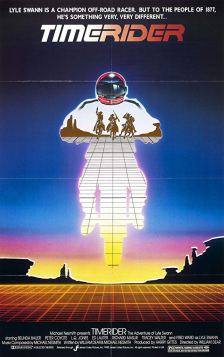 I was having one of those days a while back, you know the kind where you start wondering what happened to all those people you grew up with? I went from some of the kids in grade school, like Mickey Muchitello, to some of the guys I knew in reform school and that time I spent in the county slammer. Then I thought about the music. What was happening to the ones that got out lucky, the ones that didn’t OD or get shot by some nut or die in a plane crash? I asked Guantanamo. He said to ask Dagney Hultgreen, she knows everything. Then he said he did know about one guy and brought out a tape for me to watch.

The guy was Michael Nesmith and the tape was Timerider. You remember Nesmith, right? He’s the guy who paved the way for people like Milli Vanilli in more ways than one. Not only was he a member of the original Monkees, a group that wore lip-syncing like a badge, but he was also indirectly responsible for the atrocity that has become MTV. He made videos the “art” form that they are today (that’s right, you can thank him for bands like Bon Jovi), so it seems reasonable that he would eventually branch out into regular movies and boy did he.

Timerider, released in theatres sometime in the early eighties almost makes up for everything else (we’re still holding out on “Last Train to Clarksville”). The plot is simple: Dirt racer gets caught in a bizarro experiment and unwittingly gets sent back to the mid to late 1800’s. Not a difficult concept to get a handle on. What makes this one special though, is Fred Ward. He plays Lyle Swann (the film’s subtitle is “The adventures of Lyle Swann”), the racer. And he’s good. Throughout the beginning of the flick, everybody and their brother tells you that “no one rides like Swann.” The only reason he hasn’t gone pro is that he’s having far too much fun playing with the gadgets that have been attached to his bike and inside his visor.

But when he goes back in time, that’s when things get funky. See, the native folk down in Mexico (where all this takes place) ain’t never seen someone dressed from head to foot in red racing togs. Swann came out his end of the time tunnel in the middle of the desert, away from any type of civilization and the first guy he sees has a heart attack when he thinks that the bike (which also got sent back) is attacking him. One night in the past and already people are dying.

When Swann finally gets to the local community the townspeople all run around like chickens yelling “Diablo” and hurling things at our confused hero. Thank the Lord that there’s a local missionary (I won’t tell you who she turns out to be, rent the movie) who thinks that that Swann is not only human, but a man, and then takes him to bed to prove it.

Add in a couple of silly bad guys who want Swann’s “machine” in order to rule the west and possibly take back the North for the rebels and you’ve got the makings of a fine 90 minutes.

Skids wants to write and direct a sequel; Thyme Rider, the adventures of a motorcycling cook.