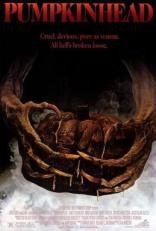 There’s nothing I hate more than a film chock full of wasted potential. Just think about where you can go if someone hands you the idea of eternal damnation for a smidgen of revenge. The ideas are endless. I know I could make a film that could scare your girlfriend’s pants off if someone gave me that kind of premise.

So what happened with Pumpkinhead?

The idea is sound, the director is this guy Winston, who has created some of the baddest special effects to hit the screen since The Beast From 20,000 Fathoms and it stars Lance Henriksen (last seen in this column as the bad guy in Brian Bosworth’s Stone Cold). So far this sounds like a perfect combination, right? Then, like hot fudge on a cold banana split, the back of the box tells me all of the trouble is caused by, get this, “Invading Big City Bikers.” Can you imagine? What the hell would Hollywood do without us?

So I get the thing home, pop it in, and curl up on the couch with a favored female (it is a horror film, after all, and you know you can’t watch those by yourself). We start out in the past, perfect prologue for the rest of the film, then, after the credits we’re right up to present day. At this point, we’ve already seen glimpses of the dreaded Pumpkinhead, heard about what brings it around and now we know what’s gonna happen, don’t we kids?

This is where things start to go wrong. See, the chowder heads who made this film define “big city bikers” as six city kids with drinking problems riding a couple of stock Japanese bikes. Ooooh…scary!

So now we get into plot. These kids (actually, just the leader whose character was so forgettable I don’t remember his name) stop for a rest right around the general store run by good old country hick Henriksen, get a little impatient, and end up running down Lance’s kid. What is it about kids on bikes that make them want to go and kill people. this should be a topic on Oprah (“Kids don’t kill people, motorcycles kill people”). And then, having killed the kid, most of them run off, leaving the young ‘un there for his pappy to find. Jeez, can we get just a bit more clichéd? If only we po’ backwoods folk had some supernatural force we could use to exact our revenge upon these horrible people who did these horrible things. What? We do? We can go visit the old gypsy woman who wants our soul in exchange for calling forth Pumpkinhead? Goody, where do I sign up. Real E-Ticket (If you don’t know what an E-Ticket is, ask Uncle Walt).

Anyway, if you’ve got a girl to wrap yourself up with on a couch, don’t waste your time with this film. Odds are, any jumping into your arms she’s gonna do ain’t because of this flick. And if she pays attention to your taste in movies, she may not be jumping anywhere anytime soon.

Skids is looking for someone new to jump into his arms during the scary parts.