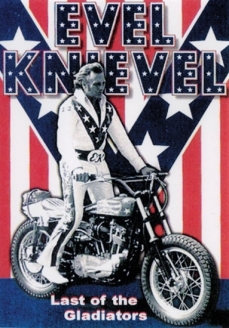 Last of the Gladiators – Reviewed by Skids Poppe

This month, I decided to take a detour at the store and ended up in the documentary section. What? Skids Poppe looking for something which just might tell him something he never knew before? Possibly even show him there’s such a thing as culture? What’s happening to the world? I wondered the same thing myself as I looked over rows and rows of Greek plays and National Geographic specials thinking I was actually going to have to watch a movie to tell you about when I saw my salvation.

There he was, larger than life even on a videotape box, the one man responsible for more motorcycle riders in the seventies than Marlon Brando was in the fifties. Of course, I’m talking about Robert Craig Knievel. Evel Knievel.

Sure, the name brings back memories. How many of you reading this don’t remember the Snake River Canyon jump or the death defying leap over the fountains at Caesar’s Palace in Las Vegas? I do. I remember the Evel Knievel Action Figures and the wind-up motorcycles. I knew all the stuff he did, but I didn’t know who he was.

The Last of the Gladiators. That’s the name of this film, released in 1986, and a more appropriate title could not have been picked. It follows Knievel’s career from early childhood through the (then) present and it doesn’t hold back.

We also have vintage interviews with Evel telling us how he conned his way into the Palace Fountain jump, how and why he beat up the guy who wrote the biography of him in 1977, and that we should never, ever, not in a million years, use narcotics. Never. Not even once. He means it, too. Every time he talks in front of a crowd before or after a jump he tells them not to take narcotics. The video is even dedicated to the young people who get the most out of life and don’t take narcotics. Drinking and having run-ins with the law are okay though.

The best things in the whole hundred minutes, however, are the sections on the Snake River Canyon Jump (which brought a tear to my eye, listening to Evel, the fearless man, relating how he thought he was going to die that day) and the interviews with the folks from Evel’s hometown of Butte, Montana. These guys are fantastic. They’re family. The ex-police chief who fondly recalls how they used to chase ‘Bobby’ around town then go for coffee together afterwards is priceless, as is the local Harley Shop owner who remembers Evel still owes him $30. (Evel’s response: “I’d rather owe him than skip out on the debt.”)

From beginning to end, you have to admire this man who never hid anything from the press or himself. He was exactly who he pretended to be: A good old boy just doing what he was good at and hoping to make a living at it.

You’ve got to love him and this documentary. I did.