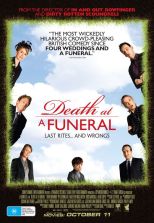 Frank Oz is a funny man. He’s also a very smart man. In his latest directorial effort, the man who brought us films like Dirty Rotten Scoundrels and In & Out, combines these two traits and brings us Death at a Funeral.

Death at a Funeral, which covers the afternoon funeral of the family patriarch at his English home, is a light, laugh-filled film which never strays too far from the general concept that funny should not be diluted with a deep message. Not to say Oz and writer Dean Craig don’t have an agenda or a point of view, they do, but they understand what makes those points of view funny. Mostly, Oz just lets the film breathe. He doesn’t rush the moments, instead, letting them build on their own energy until his audience finds the humor. True, sometimes that humor comes from uncomfortable places, but hey this is a film about dead people.

Helping Oz and Craig along the way is a fine cast led by Matthew MacFadyen and Rupert Graves as the deceased’s two sons. Their sibling rivalry is where a good chunk of the plot is hung, especially when a stranger (the inimitable Peter Dinklage) shows up bearing a secret dark enough to threaten the whole day. They, along with Keeley Hawes as MacFadyen’s wife, provide the solid core but, like a great set-up person on a volleyball team, they don’t get as many of the laughs as their fellows. That honor belongs, first and foremost, to Alan Tudyk, a good old boy from Texas who not only does a passable English accent but also holds onto the comedic, slapstick soul of this film with a grip not seen since the early days of Peter Sellers. He is able to play his situation, a man accidentally given a hallucinogenic drug, with both the absurdity it demands at first glance as well as with an emotional depth probably not found on the page itself. And he plays brilliantly off Daisy Donovan as his emotionally supportive fiancée. He deserves all of the accolades this particular performance is going to garner him. Additionally, mining the situation for nuggets of comedic gold, are Andy Nyman and Ewen Bremner, who bring a whole new level of insight into the stereotypically self-absorbed sidekick roles.

If I had to make a complaint (and as a critic that’s kinda my job) it would be that aside from Tudyk’s storyline there aren’t many surprises – at least to a cynical writer like myself. For me, there were certain plot points where I saw the gag coming twenty minutes away and hoped they were going to do something… different. Something not so obvious. My girlfriend, though, who doesn’t see nearly as many films as I do, was completely taken in when those plot points resolved themselves.

But that’s really about it. Death at a Funeral never sets itself up as anything more than an English comedy of manners and delivers on that promise. It’s intelligent and often clever, rarely relying on the kind of scatological or dehumanizing humor which is so prevalent in comedies coming out of Hollywood these days. That isn’t to say that kind of humor isn’t here in Death at a Funeral, it’s just a smarter sort of scatological.