Longest bridge in the world! 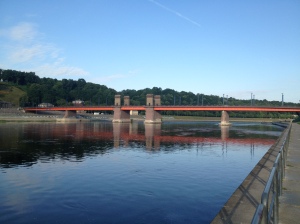 I changed my header photo today with a shot of this, the Aleksotas Bridge (some hereabouts call it the Vytautas the Great Bridge as well) but I like it because, historically, it’s the longest bridge in the world. in the mid 19th century, the area on the left in the picture, the hill, that’s Aleksotas, that was part of Poland, according to Napoleon, and it followed the Gregorian calendar. It continued to use the Gregorian calendar even after 1864 when it once again fell under Russian rule. Of course, the part on the right, where I was taking the picture from and where I was walking Laika, that part used the Julian calendar which was slightly different. So when crossing the bridge, you would either gain or lose 12 days, depending on which direction you were headed. Thus, this 256 meter long bridge which spans the Nemunas river, is, in fact, the longest bridge in the world.

3 thoughts on “Longest bridge in the world!”