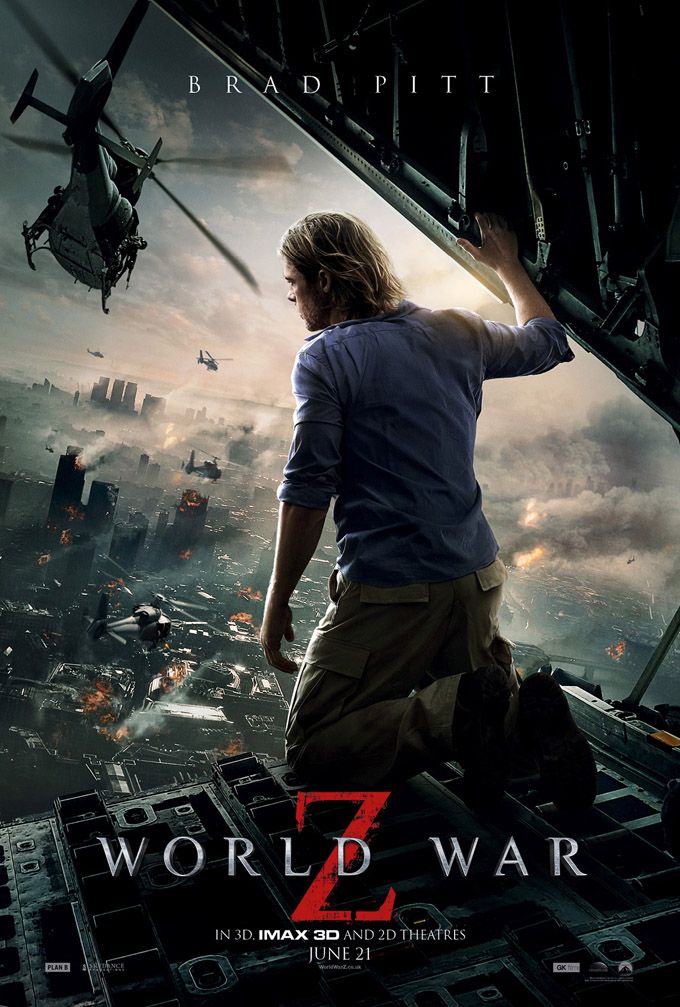 So I went and saw World War Z  last night. I liked it.

I understand it has absolutely nothing to do with the  book, which I also understand is quite good and written by the same guy, Max Brooks, who started this whole zombie craze with his book “The Zombie Survival Guide” (and who also happens to be the son of famed comedian Mel Brooks). Not having read the book, and understanding that books and films are two very different animals (teaching a course on literary adaptation will do that to a fella) I don’t think I’m missing anything. I also think that if you went in to this expecting to see a faithful adaptation of the book, you missed out on a fun, exciting and heart-stopping thriller.

World War Z isn’t a horror film in the truest sense. Within the first five minutes or so, you know who the monsters are and what they want and the rest of the film is dealing with that.I say “dealing” because again, it’s not like a standard horror where we spend 80 minutes terrified of the shadows, waiting for the big monster reveal, and the last 30 minutes fighting it off. Here, the “monster” is the disease itself and Brad Pitt, playing some sort of adventurer/investigator, spends the film confronting and logically out-thinking it.

The film does have a few jump out and scare you moments but generally, it relies more on Hitchcockian suspense; you know the bomb is there, it’s just a matter of when is it going to go off. As a summer action film, it’s smart and well paced. It also sets itself up nicely for a sequel which, if I understand it correctly, would actually be more in line with the book’s original concept.

The only thing I didn’t particularly enjoy was the 3D. Why do filmmakers insist on doing things in 3D when it is SO not necessary? Maybe it’s the studios or the venues, since they can charge extra for glass rental? The end result, though, is not always (not even often) to the benefit of the film. Yes, sometimes it works and creates that extra level, the extra oomph, to push a film into a higher enjoyment bracket, but most of the time it just adds an extra little bit of discomfort to the viewing experience.

In the end, I can recommend this one. It’s not going to win any awards, but it’s better than a lot of the dreck that’s passing itself off as entertainment these days.