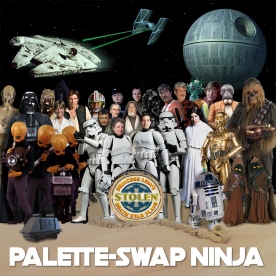 Palette-Swap Ninja, whom I have never heard of before, is a parody band who focus on geek culture. This year, in honor of the 40th anniversary of Star Wars: A New Hope and the 50th Anniversary of Sgt. Pepper’s Lonely Heart’s Club Band they did what anyone would naturally do — mashed up the two.

He instantly regretted showing the 5yo “Dirty Dancing” #nooneputsbabyinthecorner
This is what #monki is having for dinner. She likes food that stares back!
#monki practicing playing animal #jenga.
Found the place! Another classic photo from #MomentsByMonki
Had to make a quick trip to Vilnius but decided to make a touristy stop on the way home. Photo courtesy of #monki
New park, new play area! #monki has discovered a trampoline!
Enjoying a nice #night #scootering with the family out on Laisves Aleja.
Monki went to a wedding and cosplayed as the bride, who loved it!
Saying goodbye to the #endlesssummer. All good vacations must come to an end. The #realworld returns shortly!