Baltic Summer University and the birth of documentarians… 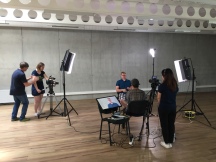 So for the past couple of weeks, I’ve been teaching an intensive filmmaking class for the Baltic Summer University. The class itself had gone through various permutations, since this was the first time it was being offered (and so, it stands to reason, my first time teaching it). Originally, the plan was to have the students break into two groups, with half making a scripted film and the other half doing a documentary. With only 5 students, however, that wasn’t going to work. Add in that four of the five were really interested in documentary work and we changed plans on the fly, eventually deciding that each of them would make their own 5 minute documentary.  END_OF_DOCUMENT_TOKEN_TO_BE_REPLACED