Is There a Perfect Order to Watch the Marvel Cinematic Universe (MCU) Movies?

The truth of the matter is that with Avengers Endgame showing up in less than a month, an event which is the culmination of 11 years and 21 feature films, a lot of people, including me, are trying to catch up and reinvesitigate everything leading up to this momentous occasion. All of which led me to wonder what is the best way to deal with the rewatch (not to mention that at some point in the future, I’ll be doing it all over again with Monki, I hope)

So over at Geeks.Media, Jonathan Sim has introduced the Spaghetti Order. According to him, this is the MCU equivalent of the Star Wars universes “Machete Order.” He has his reasons, detailed at the above link, for listing the twenty films (when he wrote his list, Captain Marvel had yet to be released. One has to wonder where he’d put that in the order) as he does below:

This is a decent list, and it makes a fair bit of logical sense. Mostly, Sim uses the post credit scenes as his connecting tissue and it seems to hold up. In fact, I think his “Spaghetti Order” is the one we’ll be following for this particular rewatch.

The problem is that it does leave some holes.

There’s this tantalizing inforgraphic, which looks at things in a mostly chronological order (considering when the film takes place as opposed to when it was released) but then Captain America:The First Avenger has that closing scene which changes things a bit. 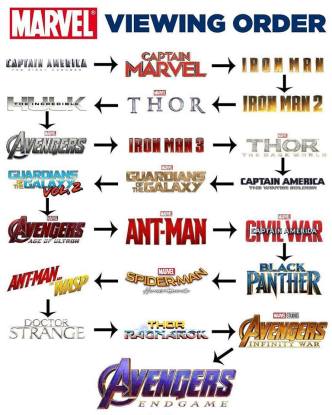 And of course, what both of those lists leave out is the the rest of the Marvel Universe, not just the feature films of the MCU. I mean what about all the one shot special shorts on the DVDs? Or what about the several TV shows which have aired and all take place in the same universe? Digital Spy has you covered there with a constantly updated chronological list of all those properties.

All that being said, it’s a golden time to be a geek.

Now if you’ll excuse me, I have a lot of viewing to take care of before Endgame finally hits!

5 thoughts on “Is There a Perfect Order to Watch the Marvel Cinematic Universe (MCU) Movies?”