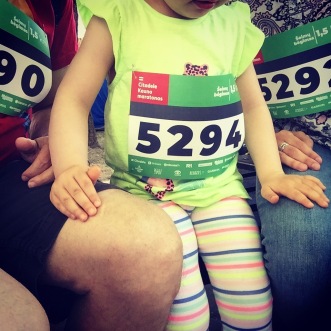 On Sunday, June 9th, I did something I’ve been meaning to do for a while now – participated in the annual Kaunas Marathon. As I said recently, I’ve been running on the treadmill and was interested in trying it out in the world. To kill the suspense, I didn’t run a marathon. I didn’t even run the 5k, as I’ve been practicing in the gym. Nope, instead, I ran, along with Rasa and Monki, the family 1.5km run.

And it was great!

Since it was the family run, it was later in the day’s program, which gave us time to get up leisurely and make our way to the rotuse square in old town. We took the bus, which is where Monki’s excitement started. While she loves having her “silver car,” she also really likes to take the bus. Good thing, since parking would have been a nightmare!

So we got to the square in plenty of time to check in and get out particpant packets. I’d registered all three of us for the run, so we’d all get the medals. Sure, had I known, I probably would have just registered Monki for the 400m kid’s run, but next year. They had all sorts of booths set up, hawking various workout accutrement, so we were able to wander around for a while before our race started. We got some ice cream, and Monki had a great time jumping on trampolines, as well as meeting superheroes, giant crabs (giving away imitation crab meat packages??) and some black figure with green things sticking out of him (he might have been a germ??). 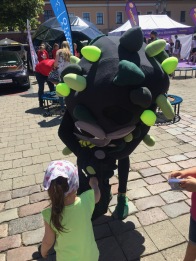 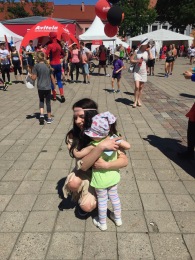 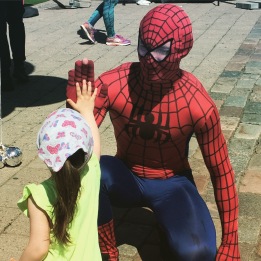 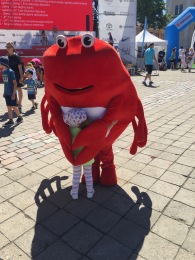 It was a hot day, so we stayed in the shade as much as possible, getting Monki psyched up for our run. Somehow, she misunderstood and thought there were going to be race cars. We explained that she was the race car and we were going to have to run. Eventually, she got it, just in time for them to start our race.

And she did great. She ran most of the way, only being carried a little bit. She did fall down once and at some point, someone banged into her (which she made sure we didn’t forget) but overall it seemed like a great experience for her. Me? Well, I was running in sandals, carrying a backpack and the swag bags they gave to all participants. You really need a support network out there to hang on to your stuff. 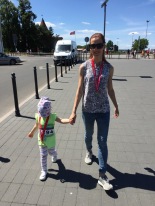 When it was over, 20 minutes or so later, we crossed the finish line and Monki got her medal. She couldn’t have been more proud! She kept showing it to us, exclaiming how “I won the race!” It was glorious!

Of course, now that our run was over, it was time to head home. Another bus ride awaited but by the time we made it back to our place, Rasa had the idea to go and check out this nature walk she’d heard about but never been to. This was after our impromptu trip to the beach the day before. Lots of being out in the sun and nature for us this weekend!

So we rested a little bit, piled into the car and, after a brief stop at the grocery store for some supplies, headed out to Kadagių Slėnis. Beautiful day for it, too. We walked along the trail, went down to the water’s edge and really, just had a wonderful family day. 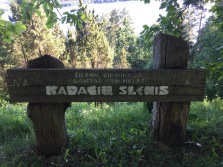 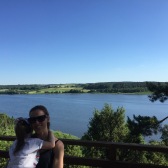 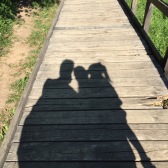 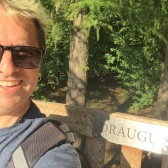 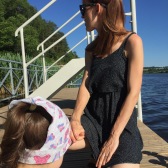 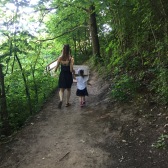 As for me, I was back in the gym, running my treadmill 5k, getting ready for my next virtual run. I’ll make it outside one of these days.