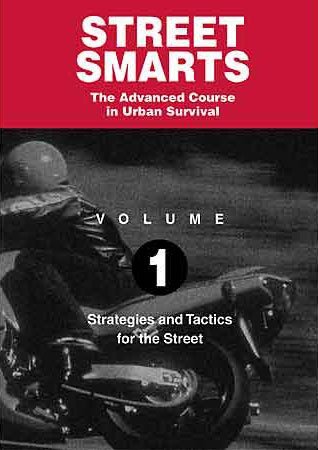 After last month somebody got the idea I liked to review documentaries, so they sent me another one. I decided I’d review it for the simple reason it saved me a trip to the video store. The mistake I made was in watching it early in the morning, when I was still tired. Hey, I didn’t know what it was yet. I didn’t find out it was a documentary until after I’d started it. It could have been another cheesy film like Nomad Riders (you remember that piece of cinematic vegetation?) and if it was I certainly did not want to be awake. How was I supposed to know this was something I had to pay attention to.

The tape is called Street Smarts and it starts off with a warning. I know, all tapes start with that stupid FBI warning, and that’s what I thought this was until I stopped the scan on my machine and read it. This warning said all the things in the tape were performed by expert riders so don’t try it if you’re new. (I’m paraphrasing, sue me.) I’m excited. I sit up and take notice. This may turn out to be good after all. At this point I’m looking forward to some bloody crash footage with some James Earl Jones (he was the guy who did all the documentaries before Patric Stewart) wanna be narrator telling me ‘this accident could have been prevented if only the rider were wearing his helmet, driving on the correct side of the road, and not drunk. Oh boy, oh boy.

This, however, was not to be.

Instead, Street Smarts is a good look at what to do if you want to learn how to ride a motorcycle safely and effectively and not get killed. The best part is it’s done by people who ride, not a bunch of Hollywood Cheeseheads. The filmmakers interview a lot of well-known WERA racers and they give you a bunch o’facts. They also let you know there are a bunch of double-digit IQ’s driving who have no regard whatsoever for us two-wheelers.

If you’re one of my faithful readers who hasn’t yet bought that bike of your dreams, or if you have and you want some general tips on how to ride, this tape is for you. Granted, they do advocate wearing helmets and leathers at all times (even when you sleep, just in case you have to go somewhere in the middle of the night) and they don’t have any good ‘after the crash’ photos although they do have some nice race bang-ups, nothing bloody but you can’t have everything. There is one neat shot of the bike going down from the bikes perspective. Totally coooool. Even if you already know how to ride, this is a nice refresher. If you want to convince somebody that motorcycles are safe so they’ll let you buy one, tell ’em you’ll watch this tape first. Have them watch it with you. And for $, you can’t beat the price.

Skids is tired of reading letters to the editor about everybody else. Please write some to him.