A few weeks ago, my friend Kevin contacted me on Facebook. A friend of his was a in a clown troupe who would be performing in Vilnius and might have need for a stage manager. So I contacted Kevin’s friend, who put my in touch with Iryna, one of the clowns and the partner of Dimitri, the guy who had created the show – a show called Aga-Boom.  END_OF_DOCUMENT_TOKEN_TO_BE_REPLACED 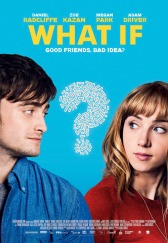 What if you meet the person of your dreams but they’re already involved with someone else? What if you keep hanging around because having them in your life in any capacity is better than not having them at all? This is the premise of the film What If (originally titled The F Word) starring Daniel Radcliffe as Wallace, the smitten in the above scenario and Zoe Kazan as Chantry, the smitee (smiter? maybe more apt).

The two meet one night at a party thrown by the Alan (Adam Driver) who is Wallace’s old roommate and Chantry’s cousin. They bond over clever repartee and magnetic word poetry and by the end of the night, the leave together, Wallace walking Chantry to her door.  END_OF_DOCUMENT_TOKEN_TO_BE_REPLACED