Posted on November 3, 1991 by CaptainJaq 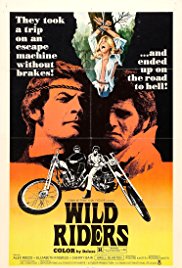 I am the first one to admit that my tastes may not be for everybody but I am quite sure we can all agree on this one. Let me start from the beginning. The other day, about a week ago, I’m at the video store looking for a flick for this month’s Spoke piece and the guy who works there comes over with a tape in his hands. “Hey, Skids,” he says, “I think you should check this one out.”

Now this kid knows me pretty well so I think, sure, I’ll take his advice and I grab the tape from him. Wild Riders. Sounds good enough, right? The box (is it just me or does everybody find it weird to describe movies as coming in boxes?) shows a finely stroked painting of a couple of bikers racing over the desert and there’s a blurb about how these two guys terrorize two chicks in the chicks house. At this point I’m fairly convinced it will be worth the ninety minutes it’ll take to watch , so I rent it.

I get home, gather my video reviewing paraphernalia together (I am a professional, after all) and pop the tape into the VCR.

After a few minutes of FBI warnings, which are a waste of time if you ask me, the film starts. I can pretty much tell right away it’s not a new, top dollar feature. This can be good or bad, depending on who’s in it and what kind of bikes they thought were good when they filmed it. The box (there it is again) confirms my suspicions. Wild Riders was filmed in 1971. Again, this isn’t necessarily bad, although most things about the seventies were. Once I find this out, my expectations drop a little but I rented it, I’ll watch it.

The opening scene starts off with the two guys who are gonna be the main characters (you can tell ‘cuz the camera is all over them) killing a girl they’ve tied to a tree. Sort of. The only way you know they killed her was one of the other guys, a member of the gang the first two, Stick and Pete, are getting kicked out of, tells you.

Here’s where I lose patience with Hollywood and those people who think all bikers are psychotic drugged-out freako’s. They just take it for granted that the viewing public (that’s you guys out there reading this) will just naturally assume that if a girl is tied up and there are long-haired hog riders around, the girl was probably raped and killed by one or more of them. There’s no story in that. I like “bad” films. At least the ones so-called normal people think are bad. I bet Dahmer or that guy in Texas hated She Devils On Wheelsbut went gaga for Ordinary People. And they call me insane.

Anyway, a film doesn’t have to have a lot to impress me, but it does have to have something. This one, which could have been called Lame Riders, has a bad script, bad acting, bad direction and bad pictures. I could forgive that. If it had maybe some decent violence, I’m not saying a decapitation is required but at least something more than a bad effect of a cello bow (it’s like a violin bow only bigger) being shoved into somebody’s eye. There was hardly any blood. And if you’re not going to have any gore, how about nudity? None here. Bikes? They always cut away before the bike gets started and then show these piss-ant long shots of them riding down the street. Get real.

This flick has absolutely nothing to recommend it, not even that jerk at the video store who, by the way, doesn’t work there anymore.