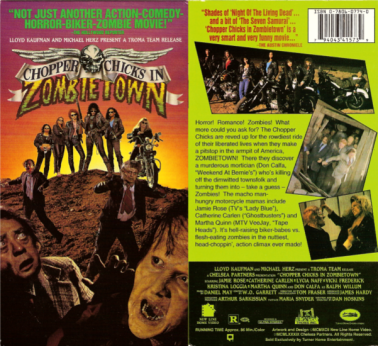 Okay, so I realize I’m writing for a paper based deep in the heart of the film industry but I sure never knew the extent to which That industry’d go to promote a film they’re proud of. I found out. And they sure have a reason for their cockiness.

I know, it sounds mushy. You’re all out there saying “Skids, we know you liked it, but was it really that good?” My answer: I could think of a few less enjoyable ways to kill ninty minutes than watching this new New Line Vid. Even before the great Hollywood party they threw (which I was invited to, hence paragraph 1) I was saying “This one’s a keeper.”

Anyway, I got an advance video copy of this film, which had an all too short theatrical run, and immediately pushed it to the head of my review list. Let’s face it; Flicks with titles like Chopper Chicks in Zombietown don’t come along everyday. Even She Devils on Wheels (which will be reviewed in a later issue, so mail that subscription form in today, tell ’em Skids sent ya) falls a little short. So the first thing I know is that somebody at Troma has their head screwed on to precisely the right degree of tightness to have produced this film in the first place. Then I find out these guys are the same ones who are responsible for Surf Nazis Must Die. The social responsibility just leaks from the box. Which isn’t to say the packaging is defective, cuz it’s not. The logo looks like it would make a great stud for my leathers. (My video came with a rub on tatoo of the logo, but I’m still working on a pin.) And the picture describes the film: Chopper Chicks and Zombies. The cast looks as studded as a decent Harley, including Martha Quinn, the MTV VeeJay. I’m stoked.

And Chopper Chicks keeps the fires burning. Sure, there are a couple of cold spots, I mean what’s art without blue but why dwell. We’ll deal with it later.

When the film opens, the first thing you’d expect is the Chopper Chicks, right? So would I, but these guys keep you off balance from the top. What we get is something I, personally, feel you really can’t get enough of: Blood. And the best part is it’s not even adult blood, we are treated to something we very rarely get these days, a small child being eaten by his father. What could be better. The lingering of the camera on the river (okay, it’s not exactly a river but I was so excited with the prospect of finding a filmmaker not afraid to kill innocent children I just got carried away) of blood flowing under the door is a beautiful touch.

Already we got Zombies, now it’s time for the Chicks. Any red-blooded American male, over the age of twelve, would enjoy these babes (even if one is a self proclaimed Bull Dyke) when they ride over the horizon and into Zombietown.

I got a little confused at this point because The Mighty Quinn wasn’t among the Chopper Chicks. She was mentioned so prominently on the box, I just naturally figured she’d be sitting there, astride a Harley just like the other girls. When she wasn’t, I didn’t let it disturb me too much, primarily cuz the other girls were so incredibly hot (Skids Pick: Lycia Naff as T.C.).

The action followed a path you couldn’t expect, with the girls, wreaking havoc until the Zombies hit town (they’re coming from the mine where they killed the kid) and the Chicks have to fight them. Still no Martha but the added touch of an endangered busload of blind orphans with attitudes becomes the films added stroke of brilliance.

Finally, Martha shows up, but her thirty seconds aren’t really worth mentioning.

This is one of those flaws I was talking about. If you’re a Martha Quinn fan, like I am, and that’s the only reason you rent this movie, you’re going to be upset and I would ask for a refund. But, if you actually sit and watch the thing, you’ll have a good time. You won’t see any naked tits (flaw number 2: how do you have a chick biker gang called the sluts who don’t flash any skin?) but I suppose the action makes up for it.

Lastly: See it, I don’t recommend ’em like this often.

For information on the Skids Poppe Fan Club just write the paper.

2 thoughts on “Chopper Chicks in Zombietown”

We were able to spend a little time #sledding in the #snow today.
Only in a post Soviet world is a chicken butt considered appropriate kitchen ware. #buttwhy
#monki gets #sparklers for #nye! Just a few years ago she was terrified and now she can get enough! Here’s to a great #2022!
When #lego worlds collide. Or when you and your daughter both get lego for #christmas
#fairies are notoriously hard to #photograph. #happyhalloween
Happy Halloween from all of us (and this weird alien being growing in the fridge)! #halloween #jello #cthulhu
Enjoying a sunny #Friday walk.
Stupidly excited about @marvelstudios @lego #minifigures! Just got my first one, #zombiecaptainamerica
Happy Saturday #rainbow